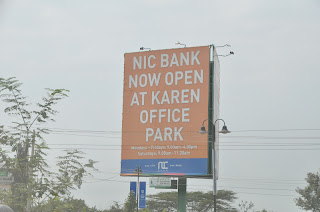 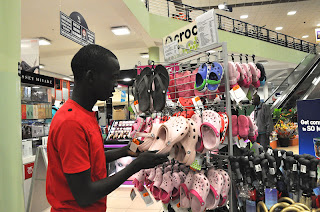 We're leaving shortly, so I'll write some more when we get to the airport in Nairobi.  We have a 3 hour wait, so I should be able to accomplish something.  Check out is at 9am, so we'll go to the mall where the KFC is located.  It will give us some time to do a couple other things while we wait, too.  We downloaded some movies for Isaac's iPhone, and just talked.  It's a gorgeous mall, filled with some very nice shops.  I'd come back to this place in a heartbeat.  The traffic is horrendous, but only because they're in the middle of building a new road system to relieve the congestion.  Much like Kisumu mall, the
"anchor" store is Nakumat.  Unlike Kisumu, this Nakumat was beautiful.  The floor was immaculate, the store was bright... and they had a croc section that Job inspected. 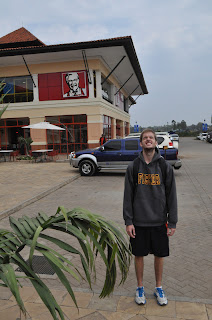 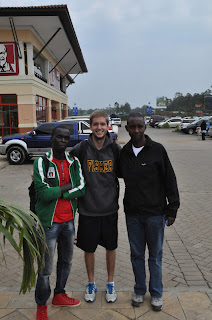 We decided against KFC after all.  I think that was a wise move.  We sat at the mall where it was located, and I transferred some movies for Isaac, and once again wrestled with the internet.  We got through this time, so it must have been something about the Royale Guest House that caused the problem.  I managed to get Thursday's blog posted while here in the airport, now I'll just add the pictues to this one, and I'll be done!  We were talking earlier, and we're going to try and stay on US time for the remainder of the trip in the hope of reducing the effects of jet lag.  It's 8am back home, so all we have to do is stay up for another 16 hours.  We've been up for 9 (Kevin's been up for 6) so that 25 hours.  This should be a cakewalk.  We can't fall asleep until we're on the plane for JFK.  We didn't get bumped for this flight, but it's only 5 hours flying back to Dubai.  The flight to NYC, however, is longer... 13 hours.  I think by then we'll be tired enough that we'll crash.  We are praying that we get moved into Business Class for that flight.  Please keep your fingers crossed-it makes a world of difference.

We're sitting at our gate in Jomo Kenyatta Airport in Nairobi, after seeing Job safely off, and one last "goodbye" to Isaac.  As we walked to the lounge we passed people of many different nationalities. Kevin said, "Mom would fit in great here.  Everyone says, 'The Facebook', 'The Twitter', 'The YouTube.'"  That one made me laugh, but just a little.  A couple just walked by us, and I said, "We should do that next time - matching shirts!"  Kevin added, "... and pants... and crocs."  Okay, maybe we won't do that next time. 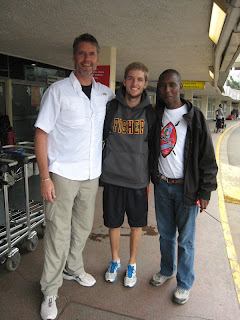 I just hung up with Isaac who sends his greetings to everyone back home and hopes to sees us all soon. He's anxious to Skype with the entire family after we get home.  Here's the last picture taken before we left.  We're going to miss him.

Posted by Adam Jablonski at 5:53 PM