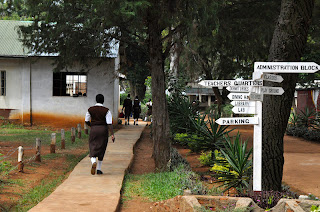 It’s 8:45pm, and we’ve only just returned to our room.  Kevin and I are completely whipped.  We spent the day running around to see different people.  We started with a meeting to discuss equipment needs, then went to Huma Girls Secondary School to visit with the Headmistress, Mareb.  Our attention will turn to her once the clinic project is over.  She has a beautiful school, (pictured left) and she runs it very well.  The girls are triple bunked and are crammed in like omena (sardines in Kenya).  Mareb had just had an operation to remove her appendix and she was still recovering. She is staying in a home on the school grounds, so that is where we visited her.  She introduced us to a young girl whose parent cannot afford to send her to school.  She always finishes in the top 4 for the school, but constantly gets sent home because she can’t pay her school fees.  She does so well, though, that Mareb has been trying to find her a sponsor.  She wants to be a doctor, and is relentless at finding ways to stay in school despite the problem with the fees.  One time, she was sent home and rather than traveling the 30 miles to her parents, she stopped in the next town and convinced a woman to pretend to be her mother and plead with the school to keep her.  It was only during the interview process that they learned that this woman was a stranger.  She’s one resourceful young girl.  She’s in Form 3, which means she’s a junior in high school. She is truly a delightful girl, and based on her grades, she should be given an opportunity to become a doctor!  We'll will definitely sponsor this girl!  She will do well in life, and the small part we play in pushing her through will be paid back tenfold when she becomes an MD.  I have no doubt that a girl this resourceful will not stop until she reaches her goal.

We then went to the Chulembo Hospital to meet with the administrators that came to the clinic the other day.  The hospital is more of an HIV center, but the government is adding a facility to make them more well-rounded.  Tom was excited about the project… it will take a lot of pressure off of the Chulembo Hospital – the people to the north no longer have to travel so far, so they will come to Mbaka Oromo instead. 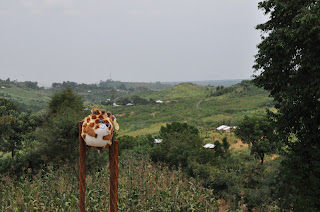 The next stop was Margaret at the Grail Center.  Jim and I used to stay with her when we were here.  Her place is a little bit further down the road, so it requires a matatu ride  before you can begin walking.  She has a main house with 4-5 rooms it, and because Jim and I always talked to her about building a facility for visitors can stay, that project has begun.   The first floor is almost finished, and we went up to the second to see the view.  In my backpack is a small stuffed animal that is pictured here, overlooking the valley.  Karen gives me a stuffed animal every time I travel, and I always keep it with me.  He finally got to see some daylight today!

Our next appointment was with Hilda Aiyeko, the public health officer that has been involved with the clinic project from day 1.  Our 2pm appointment got changed to a 3:30 appointment because she had to conduct a polio clinic in western province.  We had some time to kill (it was only 1pm), so we went to Kit Mikayi. 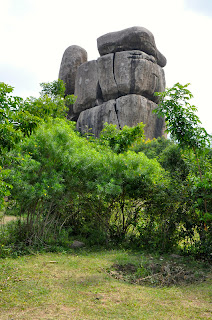 It’s a small area with a bunch of really big rocks.  I had driven by this place numerous times, but never gone in.  There’s a lot of history behind the rocks, both figuratively and literally.  Legend has it that the first man in this area made his home in the rocks, and named the area “Kit Mikayi” (First Wife).  It was a place of worship before it became a place of war.  People would seek refuge in the rocks, as well as attack from the vantage point they provided.  Many tribes still travel here to pray and worship.  Wax drippings are in several places where pilgrims would place pictures of their loved ones, or their god(s).  We encountered two such people when we were there.  We were told that there are usually many more.  We made our way through the rocks to the outside, then climbed toward the top.  These things are absolutely huge.  It was amazing to see.  Kevin and Job went with the man showing us around to a specific stone.  They shimmied there way around it, and it was obviously a bit harrowing, because Kevin’s face spoke volumes when he came around to where I could see him.  He told me that he had to stay on his toes has he slid around a 2” ledge, with nothing really to grab onto besides the curvature of the rock.  It was about 100’ down.  They both made it around, however, and should be commended for it. 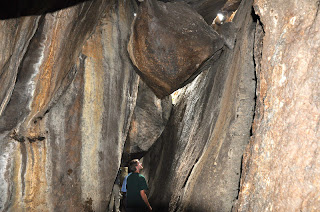 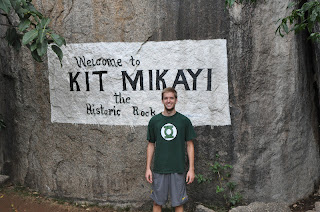 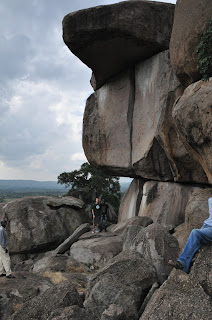 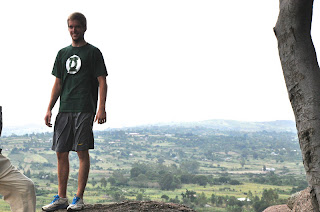 We got to the bottom of the rocks, and were met by widows dancing, and singing Luo songs.  Our driver Moses joined in the dancing, and while they were circling a small blanket, the must have noticed me moving back and forth with the tune.  The oldest woman in the group left the circle and pulled me in.  Kevin found it quite humorous.  I owe Andrea a dance or two when I get home. 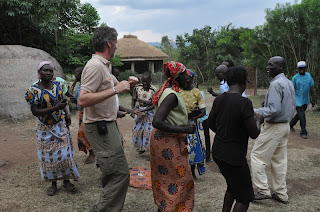 We thanked them for their hospitality, and went on our way.  We made it to Hilda’s office by 3:15.  She showed up at 4.  Karibu Kenya.  She really didn’t have time to see us, but she made some.  It was actually very kind of her to do so.  We took a good chunk of time, out of a day that she really didn’t have.  We talked a bit about the additional structures needed, and the final requirements necessary before the government takes over with staffing.  All seems to be going according to schedule and there should be no reason that the clinic can’t open before the end of the year.  We will begin purchasing equipment in October. 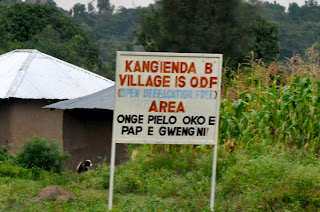 We headed into Kisumu for dinner.  On the way, I took a picture of a sign that I saw on the way out.  It’s the first “no pooping” sign I’ve ever seen.  I don’t even know what it means!  Are they talking about animals or people?  Job didn’t even know wat it meant!  Then we came upon a checkpoint so I thought I’d snap some pictures so you’d have a better understanding of what it looks like.  There’s a hunk of medal laying across both lanes with railroad spikes sticking out of it – there’s no way a car could get past them.  It’s looks mideval, but it does the trick. 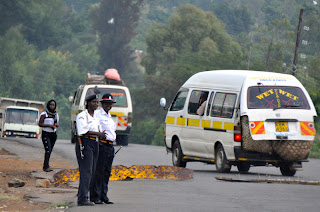 Kevin and Job were jonesin’ for a pizza.  I ran into Nakumat to get some much needed minutes for my phone, and we ate to our hearts content.  The ride home was interrupted with a stop at Moses’ house so we could switch vehicles.  We got the better end of that deal.  We got out of the matatu and into the prado.  Any vehicle with a suspension and shock absorbers is ok with me.  The roads here are absolutely hellish.  Here are pictures of both.

Here we are, back in bed. I don’t have the strength to write too much today, and I could use some extra sleep before digging begins tomorrow (finally).

The last few days are always the hardest.  As we continue to visit people and complete tasks, there are always times where I wish Andrea or Katie or Karen, or any combination, were here with us.  Sometimes because I think they’d enjoy it (like Kit Mikayi), and sometimes because I just want them near me.  I miss them more and more each day, and can’t wait to see them on Sunday. Soon, very soon.