We woke up late this morning.  Apparently, when I set the alarm for 6am, I also needed to specify the days.  I just assumed that it would ring at 6am every day.  Well, it didn’t today.  I woke up at 6:47… we were supposed to be on the road at 7 to be at the school by 8:30.  We showered quickly and grabbed a piki piki.  These are motorcycle drivers that are verified with the university to transport people from place to place.  It was 100ksh/person, or $1.25.  It was worth it.  We got to the school by 7:40. 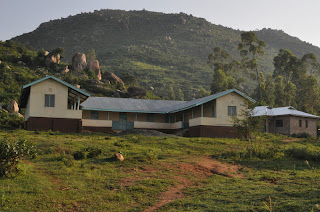 There weren’t many teachers there yet, so we took our pack to the health clinic.  There, we tried to grab a quick bite for breakfast - a couple (4) breakfast bars for Kevin, and a clif bar for me.  We waited for the morning assembly to end before we returned to the primary school to meet with the headmaster Charles Odiero. 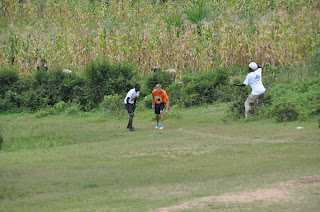 It could have gone better.  Tensions existed between the clinic committee, the school committee and Charles.  We talked for over 5 hours before we finally had to stop to see the clinic committee.  I repeated most of my comments from my meeting with Charles.  Ultimately, it was a “let’s play nice in the sand box” speech.  The clinic committee seemed more grateful than Charles and the School Committee members that were present.  The meeting with the clinic committee lasted another 3 hours.  Afterward, we headed to the secondary school for lunch.  Before lunch, however, Job and Kevin decided to race again.  Job was really pushing for a rematch.  This time he had many onlookers, so he was definitely going to win.


Samuel was the starter, I stood right on the finish line to take
pictures, and Caleb took the video.  This race was well documented. 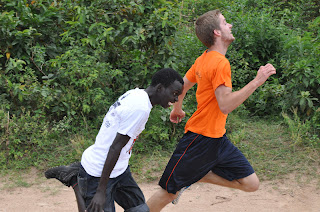 Job lost.  Again.  He appeared to start a little earlier than Kevin, but Kevin overtook him at the halfway point.  The crowd cheered!  A picture speaks a thousand words.  3 pictures speak even more. 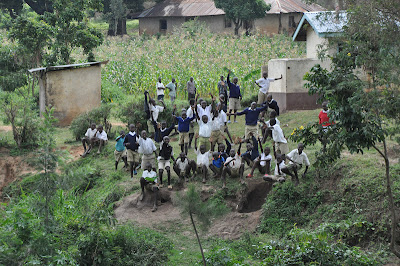 Afterward, we walked around the Secondary School, inspecting the floor for repairs.  Lunch was waiting in the last classroom.  Kuku, ugali, rice and soup.  I thought it was delicious.  It was now close to 4, and we were supposed to join Marlene, Peter and Patti to play softball with Caleb and his team.  I snapped some pictures before the rain started falling, and it really fell.  I took shelter after 30 minutes; Kevin took shelter when he saw lightening.  Smart kid. 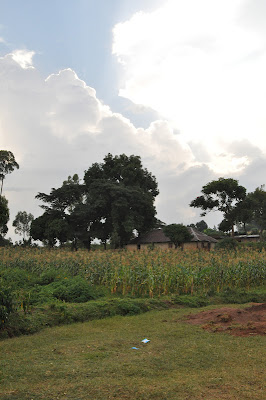 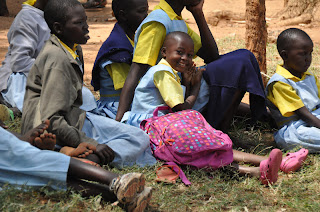 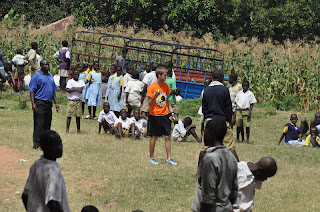 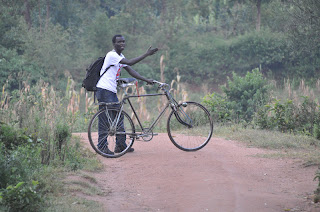 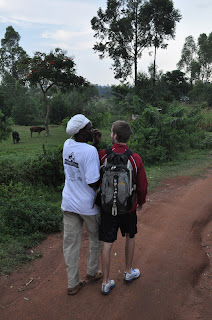 We waited for it to subside a bit before heading over to Susan and Emmah’s house to Skype with Andrea and Karen.  It was only sprinkling, so we didn’t get too wet.  When we arrived at the house, the rain started again.  I was afraid that Ann and Karen wouldn’t be able to hear us… the baby started crying, and that didn’t help.  It didn’t matter, though, because we were having great difficulty connecting.  After 15 minutes of fiddling with it, we finally got it to work!  Their home was very dark, but mother nature decided to help by stopping the rain, so I sat on the floor in front of the door (it was the only place that light was coming in) with Susan on my left leg, Emmah on my right, and Danton between them.  IT WAS WONDERFUL!  Everyone enjoyed it immensely.  I’m quite certain that the clan never participated in something like this before.  Questions and comments went back and forth and laughter was constant.  We eventually had to stop because it was getting late.  It was already close to 5:30 and it was time for us to start the walk back.  Job was complaining that his legs were very sore.  Susan’s grandmother Ester is a local “Medicine Woman” and offered to help massage them.  Job declined.  As we walked away from the house, Job told me of a story about a young girl who was brought to Ester.  She had been complaining about arm pain for as long as she could remember.  Ester grabbed the girl’s arm and broke it over her leg so that it could mend properly.  “Imagine!” Job said.  I’m sure it was all here say and rumor… well, maybe.  We continued to laugh the entire way home.  Job was pushing Samuel’s bike, because he wasn’t big enough to ride it.  The seat was level with Job’s chest.  Kevin was joking with both of them the entire time, while Caleb and I continued a short distance behind him.  “Kevin is very funny,” Caleb said.  “I like him.”  We like him, too. 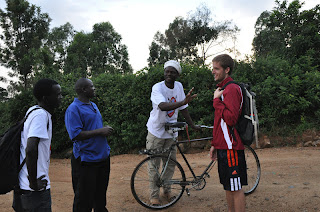 We stopped at the T where Kevin and I go right and the others go left.  Before our goodbyes, Sammy had a brief conversation with Kevin.  You see, Sam always wears a head covering.  Always.  Job and Caleb always want to see his dreadlocks, so they told Kevin that Sam was bald, thinking that Sam would want to prove them wrong.  Little did they know that Sam made a deal with Kevin – he will remove his head covering for Kevin, but only Kevin.  Nobody else is allowed to see.  Caleb and Job whined about it while Sam and Kevin laughed.  3 more miles to go.

I’m completely exhausted, and periodically nodding off while I write this.  Thank heaven for spellcheck, although I’m not sure I’m going to be able to double check my entry.  We’re heading back to the school to deal with some more politics, then we’ll meet with Simon the Contractor, start some digging, then take the Building Futures staff for lunch in Kisumu.  They’re long overdue for a special treat, and kuku at Mamba’s will fit the bill.  We’ll then return to the school, do some more work, and try skyping again.

I am utterly exhausted.  Kevin is already asleep.  Again.  He was waiting for me to finish the blog before checking in on his mail.  He didn’t make it.  I’ll wake him so he sleeps through the night. 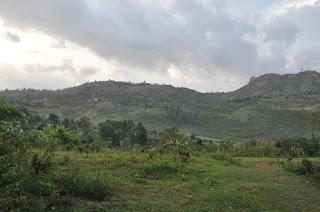 Posted by Adam Jablonski at 8:58 PM