We had another restful night... although Kevin's lasted longer.  I stayed up to talk to Katie and write/post yesterday's blog.  I could have written several more pages about the conversations we had with John, but I'm never sure when my interests become boring to the reader.  That won't be the case today!  We've already got some great stories, beginning with last night when I went to bed.

I finally climbed under the mosquito net at 12:30am.  My laptop was down to 1% battery, so I was sitting closer to the outlet as the photos were  uploaded.  I was looking forward to getting some sleep.  The big mosquito on my pillow had other ideas.  It's been cool here at night, so the bugs really haven't been a problem, until now.  So I see this skeeter on my pillow.  First instinct was to kill it.  One less mosquito in the world is not monumental, but one less under my net is.  Sadly, he must have just finished a midnight snack, so I ended up with a little more than squashed mosquito on my pillow.  That's why pillows have two sides!  Flip it over - good as new.  I spent the next 5 minutes praying that it wasn't my blood, and the next 30 praying that it wasn't somebody else's.  Fortunately, we have a third bed in the room, so I just switched pillows.  It still took another 30 minutes to fall asleep.


I woke up at about 5am and tossed and turned until 7:30.  Lucas was meeting Kevin and I on the field to run.  I woke Kevin up at about 7:40 on the assumption that Lucas would be late.  When a Kenyan makes an appointment with you, it's like there all doctors!  They're never early, rarely on time, and usually you end up waiting at least 30 minutes before you see them.  Lucas was not your ordinary Kenyan.  He called at 7:55 to say he was on the field.  We were ready, so we ventured out.  Despite his win yesterday, Kevin was hoping it would be an easy run.  "Please be wearing pants," he said under his breath as we came around the corner.  "Did I tell you that Lucas runs in bare feet?" I said.  "Oh God," was his response.  Sure enough, Lucas was wearing black sweatpants, a baseball cap and flip flops.  He removed them, however, to reveal those full length, skin-tight running pants.  They were also black.  He took off his hat for a moment to show me how he shaved his head to look like President Kibaki... it's all part of his act.  As he removed his sweats and kicked off the flip flops, he asked Kevin how far he runs at school, "1,000, 2,000 meters?"  Kevin didn't answer quick enough, so I chimed in.  "10k."  Kevin didn't say a word, but his face said, "Ouch."  Lucas didn't skip a beat, "Ok, that's 24 laps, let's go," and off they went.  While those two ran, I snapped some pictures and talked with one of Lucas' friends who tagged along.  He was introduced as "an acrobat"and I soon found out why.  He spoke very little, and just started doing his "exercises."  It looked painful, but he smiled most of the time.  You could see a budding showman while he went through his routine.  I'm not sure he's ready to start working with the Flying Wallendas, but he's trying.

On their first lap around the track, the started to approach a tree full of monkeys.  They scattered as they got close, and because of the hedgerow surrounding the field, they had nowhere to go except along the same path the runners were on.  It looked like the monkeys were being chased!  It was quite humorous. I was on the other side of the field, so I could get a photo to caption, "why are these people chasing us" so you'll have to settle for some stills after they fled into some nearby trees.  I stayed a while longer taking various pictures of this twosome before returning the camera to my room.  I went back to the track to runs few laps.  I don't know if it's the metric system, or perhaps the souther hemisphere, but "a few" meant 1. 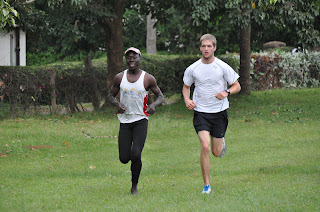 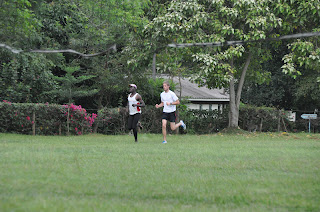 Kevin was panting like a dog.  Lucas wasn't done with him.  He continued to put Kevin through a rigorous routine that he does when training.  A series of fast paced jumping jacks, lunges, stretches, more lunges, running in place and push ups.... lots of pushups.  First on the side of your hand, then fingertips, then palms, then fists... Andrea would have loved it.  Kevin, not so much. Lucas turned and said, "Kevin.  He can run," with a heavy rolling "r." "You're (pronounced Yoo-ah) son is a runner (pronounced run-ah)."  Yes, another rolling r.  He said it many times as we walked to his studio that was along the main path through the university.  We saw the radio station where he does some of his comedy.  He performs in front of groups, too, but he enjoys the radio a lot.  The studio itself was a balmy 95 degrees.  Kevin was quiet, but that was just because he was melting.  Lucas would have been happy to sit in that studio with us for hours, but I thought it best to start heading back.

We met several of his colleagues from the radio station on the way back.  We probably only walked 1/2 a mile before we reached our room, but Kevin's next 4 steps appeared Herculean.  It was just enough to put him in front of his bed.  He's been sleeping ever since.  I'll let him get some shut eye before we clean up and begin our walk to Mbaka Oromo at 1pm.  I'll post that part of our day later.
Posted by Adam Jablonski at 11:11 AM