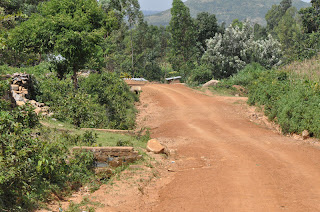 We both got some much needed shut-eye before leaving for Mbaka Oromo at 1:30.  We showered and packed our backpacks with items for Ester, Susan, Emma, Danton and Wendy.  "Showering" has been interesting.  Although it is true that they have hot water, it's only 1 temperature - scalding.  I gave Kevin a refresher course in using the basin - get yourself wet, wash your hair, lather up, then dump the basin over your head.  When he came out, he said, "it's like having your own watermark in there."  He makes me laugh.  I was pleased (and surprised) that everything fit in two backpacks.  I don't think we could have fit anything else!  We joked a bit before we got a phone call from Job asking if we'd left.  We wandered out through the gate and proceeded down the paths that we travel each day.  This was the fist time we've left at mid day, so it was moto sans (very hot).  I was sweating buckets before our first mile was over. 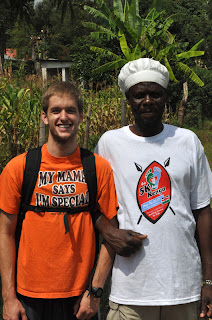 Samuel met us as we crossed the stream and accompanied us for the remaining 3/4 of a mile.  We took the same short cut that we stumbled upon yesterday.  There was a funeral going on, and we actually walked right through it.  Literally.  It was a bit awkward for us, but quite common place for them.  Funerals continue for days here in Kenya, and life goes on around them.  What made it more uncomfortable is that I knew at least 10 people there, and they all got up to come and say hello.  Yikes. These are the times I wish I was 5'6".  We hustled our way through assuring everyone that we'd see them later in the week, "We'll be around," is the common statement.

Job and Caleb met us at the school, and we stopped just long enough to take a drink of water.  Then down into the refine and back up the other side... past the secondary school and cornfields.  We finally arrived at the 1st home.  Danton came running towards us with a big grin on his face.  Emmah and Susan were close by; both wearing their "Fairport" shirts.  Ester greeted us and invited us inside.  Kevin and I peeled the packs off our backs and began the distribution of presents.  I explained to them all that Andrea and Karen were very sorry that they could not come, and assured them that they continue to be in their thoughts every day.  After giving the children their bags, we went through each one to reveal their contents - when we handed each bag to the corresponding child, the just sat there with the bags in their laps.  They continued to clutch onto the stuffed animal until i started removing each item.  I started with Susan (the eldest) and ended with Danton.  They were full of smiles, although it was difficult to catch Emmah - she's very shy and usually turns her head if we're not fast enough with the camera.  Kevin had photo duties, and he did a fabulous job. 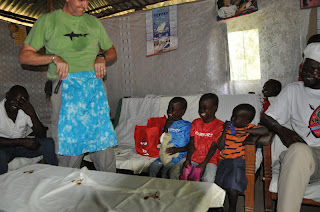 We then handed the remaining bags to Ester who was extremely grateful for all the attention.  She send her love and hugs to everyone.  It was 8am back home, so I took a gamble on FaceTiming Karen.  I know, it was a longshot.  She didn't answer, but I was able to show them the pictures of Karen and her friends in their M&M shirts.  They kids grinned as I showed them that each of the girls t-shirts matched the bags that contained their gifts.  I told them that we'd try again to call on Monday - I didn't tell them that Karen likes to sleep in!  That should work, though.  If I call at 4, it will be 9am at home, and if Karen knows she'll be talking to Emmah, she'll be awake. We have to FaceTime on her phone, which can be difficult, so I'll try to load Skype on my MacBook. 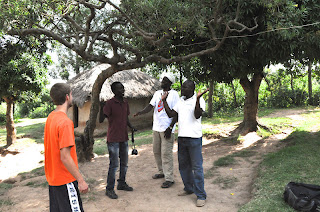 We stepped outside and took some more pictures as the girls and Danton played with their presents.  Meanwhile, Job was trying to explain to Caleb and Samuel how he lost the race with Kevin.  Caleb said, "You are just making excuses!"  I said, "We have a saying in America, 'Excuses are the nails that build the house of failure.'"  Although it sounded like, "Excuses ah the bells that beeld the house of fail-yaah."  I've remembered that since the first time Katie came home and said it to the family.  The entire group erupted in laughter. 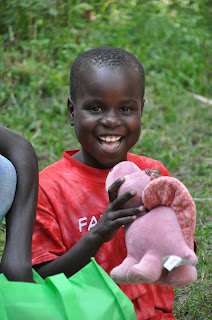 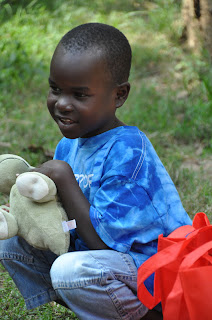 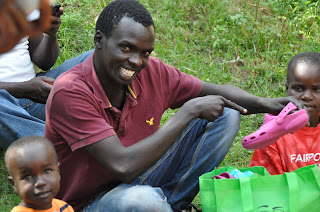 Ester then invited us back in for a feast of ground nuts (peanuts), delicious mandazi, bananas and chai.  We ate like kings, all-the-while listening to Job tell everyone how he was going to beat Kevin in the next race.  "Let's make a bet.  I'll do much better if we bet."  Nobody nibbled.  Here was the final compromise.  Job gets 3 days to train.  On Tuesday, rather than us walking 5 miles to the school, Job will walk the 5 miles to the field where Kevin runs.  Caleb and Samuel want to come as witnesses, although Samuel said, "I may have to close my eyes.  I don't want to see you lose again."  Again, uproars of laughter.  Kevin and Job bantered back and forth for at least an hour while the rest of us just laughed.  The time was passing quickly, so we thanked Ester for her hospitality and moved on towards Wendy's home.  When we were in Kenya in February, one of our friends, Amie, became quit enamored with Wendy.  She asked if we'd have room to bring her something, and of course we did.  She dropped it off the Sunday before we left. 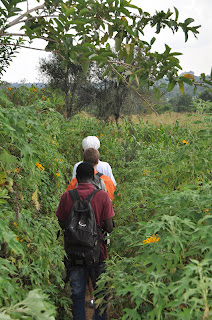 As we exited her home, we noticed dark clouds building up against the hills.  Job said, "Will we beat the rain?"  Samuel immediately said, "No rain."  10 minutes later, Job said, "Sammy's a bad weatherman."  It started as big, intermittent drops, and quickly became a steady sprinkle.  By the time we reached Wendy's home, it was a torrential downpour.  We met Wendy's uncle who cares for her and her two sisters.  Wendy's parents died when she was younger and he took on the responsibility of raising them... along with his 5 children.  Kevin sat down on my left, and Wendy was on my right.  The lighting of the mud and dung home was poor, and the clouds didn't help, but once again, Kevin did a great job.  I talked to her about Amie and how much she thinks about her and began showing her the gifts that she purchased for Wendy.  I removed the pretty pink back back from my drab grey one, and her eyes went as wide as her smile.  I opened it and began removing the contents.  First I removed a dress.  Pretty, colorful and striped - it was a sharp contrast to the tattered one she was currently wearing.    I stood up and pretended to wear it myself.  Laughter started, and the smiles continued.  Another dress, pencils, colored pens and pencils, paper a book... and fuscia colored Crocs.  A very soft and delicate, "thank you" followed each item.  Amie will be happy to know that after the contents were returned to the backpack, she sat silently holding the crocs.  Slowly but surely, she slid her feet in them.  Perfect fit!  She's an adorable little girl with bright eyes and a perfect smile.  Her uncle has said that she continues to work very hard at school.  I was sure to leave something for him to show gratitude for his kindness in taking in Wendy and her sisters. 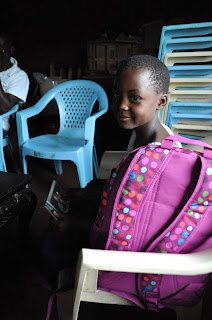 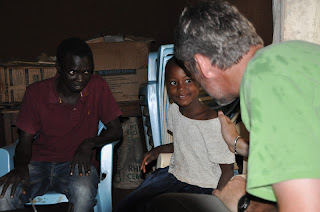 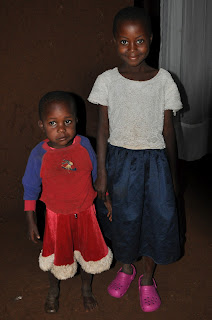 They brought sodas out for us, and everyone had one including Wendy. Wendy, Kevin and I had orange Fanta, and the others had Sprite or Krest (no, it's not a toothpaste).  The rain continued to thunder down on the tin sheet roof.  I looked at Sam and said, "No rain," as if to say, "Don't quit your day job."  We laughed and joked until Sam said, "Ok, this needs to stop."  He got up and walked out.  I thought he was mad, but Job said he was just going outside to talk to the rain.  Oh, ok.  He walked back in after 5 minutes, and by the time he sat down, the rains stopped.  Job and I sat there in disbelief.  Same said, "I just asked her to stop."  Apparently, he needed to tell her a second time.  Sure enough, it stopped again.  At that point, we got up to leave in the hopes of taking advantage of the break in the weather.  It was a 10 minute walk to Chulembo, so how bad could it be?  I snapped a quick picture of Wendy and her little sister before I left.  Note the shoes... all three of them.

We got drenched.  The downpour started 2 minutes after we left.  It continued long after we arrived at Chulembo.  We waited at the matatu stand for 15 minutes.  Sure enough, the rain stopped just before we stepped in the van.  It was packed, too.  A matatu is the equivalent of a minivan with 3 bench seats in the back.  This particular one held 21 passengers.  I'm not counting the conductor how was holding on to the roof while he stood on the running board.  It was a short drive, so I wasn't particularly concerned.  Normally, matatu drivers are notoriously dangerous, and serious accidents are more normal than rare.

We made it home safely, and because we're not hungry, we just went straight to our room.  I've been having conversations with Isaac and Job while Kevin "worked" on the computer.  I took it first to get the blog started.  I think I was typing for over an hour before I gave him a chance to chat with friends.  He then gave it back to me when the power level got to 6%.  I'm writing the last of my notes for today, then we'll watch a movie before falling asleep.  Last night we watched Wolverine for the 30th time, but it was the first time we realized there was a 30 second clip at the end after the credits.  Deadpool is a character than Kevin likes, and it happened to be about him.  He's still talking about it.

Tomorrow we head to Kisumu for church and some shopping... and kuku at Mambas - they have the best chicken in Nyanza provence. 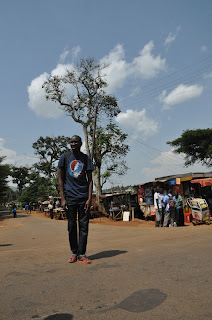 See you all tomorrow.  Sorry, but no critters today.  It must be too cool.  You got two yesterday, though, so cut me some slack.  :)  Instead, here's a Kenyan Dead-Head...