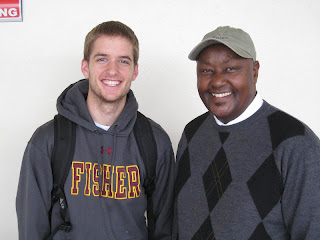 We managed to get some much needed rest on the ride to Nairobi.  It’s amazing how much easier it is to sleep when you can lay down.  I know that I could have used another 6, though.
We made it through customs quickly, and were happy to see our bags made it out fast, too.  We tossed them onto a cart and walked through a narrow alleyway with taxi drivers lining either side – shouting at you to come with them.  Once through the short gauntlet, we ran into Fr. William K’mau.  He walked towards us grinning, and after many handshakes and hugs, we walked another 30 feet to get away from the crowds.  We were only traveling across the street to the domestic airlines for our flight to Kisumu.  We stayed and talked with Fr for a bit, and then I started digging for the books Sister Ann bought for him.  They were (of course) in the last bag.  He happily received them, and following more handshakes and hugs, we made our way to the other airport.

We flew Kenya Airways this time.  I would have to say that they are the “Emirates” of Kenya… leather seats with immaculate interiors, and the planes always look new.  I don’t’ think either of us remember anything between takeoff and touchdown.  I never even got the complimentary nut mix (cashews and macadamia nuts) that Karen absolutely loves.  We arrived safe and sound, exited the plan onto a very shaky set of stairs.  It was like walking down a rope bridge… if you moved to quickly, it began to sway from side to side.  I moved slowly.  We waited a few short minutes for our bags at the carousel marked “Belt 1.”  I found it interested that it was marked because there was only one carousel in the airport.
Job was waiting outside smiling as we came through the doors.  It’s always nice to see Job.  Despite his namesake, he is a very happy individual.  The bigger surprise was the driver he had found for us.  Moses.  Yes, that Moses.  The one who during our last trip turned a 6 hour ride to Masai Mara into a 12 hour ordeal that included an unscheduled trip to Tanzania.  The same Moses whose car continued to fall apart piece-by-piece as they drove.  Ugh.  As he went to fetch his vehicle, Job said, “Wait til you see what he is driving.”  He wasn’t kidding!  Moses pulled up in what appeared to be 2010 4x4 (I can’t remember the model).  The interior was beautiful. I was shocked.  I sure hoped he didn’t expect to get the same money we paid him for a 12 hour drive!  We were only going to use him for a couple hours… trip to Nakumat for supplies, a quick dinner, then off to the Maseno guest house.
We had dinner at Mon Ami.  Service was crazy slow, but we knew it going into the place.  We have nobody to blame but ourselves.  During those two hours we tried to set up the phone I bought so that I could call everyone back home to say we had arrived safely.  No such luck.  They had to settle for a text message on Job’s phone because nobody was answering their phones.  We continued to try and play with it, but no luck.
We devoured our dinner when it arrived.  Kevin had a plain cheese pizza.  I, on the other hand, had the Vienna Pizza.  It’s the only time I have hot dogs on my pizza.  I refuse to believe that they’re really Vienna Sausage.  That’s probably for my own safety.
The ride to the Guest House went quickly.  It appears that they’ve been working on the roads because the ride was not as bumpy as usual.  Neither Betti nor Rhoda were there, so we were greeted by Francisca.  I ddin’t remember her from the last trip, but she clearly remembered me.  We dragged our bags and supplies to our room.  It was one of the larger ones on the eastern side of the building.  3 beds, although we obviously only needed 2, and hot water.  We were both thankful for that.  It wasn’t until we had unpacked everything and were ready to go to sleep that we realized there was no toilet seat.  Karibu Kenya.  Although I knew with great certainty that I was safe from possibly falling in, I could not vouch for Kevin.  Much like his first trip here, he took it in stride.  We fell asleep quickly.  It was already after midnight, and our plan was to get up and run at 6am, before breakfast and our meetings.
Posted by Adam Jablonski at 7:14 PM