I woke up at 7:30am.  I could say that I got up at 7:30, but I’d be lying.  I actually got up at 8.  We got dressed and walked outside to run around their soccer field.  Josephat greeted us as we passed the front desk.  He’s all smiles and his favorite word is, “Welcome.”  He can never say it just once, usually 3 times does it, though.  That is, of course, unless he’s speaking in sentences.  In those instances you can expect to hear it at least 6 times… just not in a row.

The grass around the track was damp.  The temperature at night was great!  It couldn’t have been above 68.  It was still cool when we got outside.  The field is only about 75 yards away, and I’ve never seen anyone running on it.  It is enclosed by a 4’ barbed wire fence that protects the 3 volleyball courts and 2 small (or 1 large) soccer field.  Kevin was wearing some fancy shmancy satellite watch that tells you where you are and how far you’re running.  I was too busy gasping for air to notice it beeping every mile.  In actuality, I wasn’t even with him when it beeped the first time!  I waited until he ran around to catch up to me before I started running again.  This was where he gave me a quick lesson in running at higher altitudes.  The only thing I remember him saying was,  “It’s much harder to breathe, but we’ll be used to it before we get back.”  I couldn’t hear anything else due to the pounding in my ears.  I remember saying, “I hope you don’t expect me to talk while we run.”  They’re was no way I could form a sentence between the gasps of oxygen. Even he was struggling after 3 miles, but he made it to 4 before relenting to the shortness of breath and dehydration (we definitely didn’t drink enough on the plane).  As we ran, we got plenty of stares and backward glances from the students walking to class.  One asked Kevin if he was training for the Olympics.  He, of course, said, “Yes.”  They went wide eyed as he continued running.

I hopped in the hot shower first.  This was when I discovered that the hot water came out of the showerhead and the cold water came out of the brass spicket towards the bottom of the shower wall.  It made for a difficult situation at first.  The water was literally scalding, and it was raining down in the middle of the 3x4 shower.  I didn’t fit very well.  You couldn’t splash water out of the basin without singing your back, so guess what I did?  I singed my back.  Lesson 1.  If you’re going to be cleaning yourself with dirty water, at least use hot – that way there’s a greater chance that it kills the larger parasites in the water (or at least I hope it does).

Job arrived shortly after I got out.  Kevin hopped in while Job and I started reviewing invoices for our meeting on Friday.  Payment vouchers didn’t match up with invoices… it was a mess.  Kevin came in periodically to see how we were doing.  We didn’t have a lot of space to work in, so he couldn’t really help much.  He would go back to his room and grab catnaps.  Think really big cat.  At 2:00, we took a break and went across the street for kuku (chicken).  The Green Park Tavern is a staple for us.  The food is ridiculously inexpensive, and very tasty.  Three orders of chicken, ugali and sakumawiki, and 3 sodas cost $10.  We stripped the bones clean and headed back to work.  We eventually called in Simon (our contractor) who came in to give us some answers. 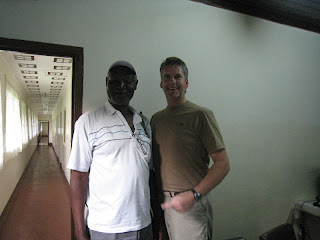 When we finished, it was 6pm.  He asked if he could say a few words before leaving.  Another sign that they’re afraid of me.  Job keeps telling me that, although I hadn’t really seen it until now.  He assured me that I would see more tomorrow during meetings with the Clinic Committee and Charles Odero (the new headmaster at Mbaka Oromo Primary School).  He spoke slow and deliberately, and made great suggestions concerning our relationship with the aforementioned, as well as saying good things about Job and Sammy (Samuel).  Everyone call him “Sammy” now.  It’s funny, because with the exception of Job and Simon, everyone’s definitely afraid of Samuel.  I just can’t see anyone calling him Sammy.  He’s well over 6’ and as strong as an ox, with a deep voice that bellows through the valley.  The guy’s got no filter, and I love him for it.  He works very well with Job, who is small, much more even keeled and soft spoken.  They’re the perfect pair.  Simon’s a big man, too.  He stood next to me before leaving and then glanced over at Job, “I am taller than this man, yes?”  Job laughed.  “No,” he replied, “look at heem!  He is looking down at you!”  We all laughed as Job snapped a couple of pictures.  Kevin was back in the room during this point, so after Job walked Simon out, he came back to the room to say goodbye to Kevin and I.  He wrapped up the sneakers we brought him… size 7.5  “I have feet like a gahl (girl),” he said laughing.  He placed them in a bag between two sweathshirts so nobody would see them as he walked home.

We finally got a chance to call Andrea and Karen, too.  It was great to hear them (although I still haven’t talked to Katie).  I retold the story about running, and Andrea laughed about the Olympics.  The delay on the phone allowed her to say, “I’d have said, ‘Yes,’” before I got Kevin’s response out - that made her laugh pretty hard.  We continued to talk about our respective days until fatigue began to set in.  We laid in bed for awhile, then made some peanut butter and jelly sandwiches (no jelly for Kevin), before we started watching a movie on my computer.
We called Andrea and Karen one more time.  Kevin’s now asleep while I type this.  I have tried desperately to get the modem to work, but no luck.  I don’t want to post too much on the blog at one time, so hopefully I’ll get it figured out tomorrow.

Have a wonderful night!  I hope you all sleep as soundly as I will. 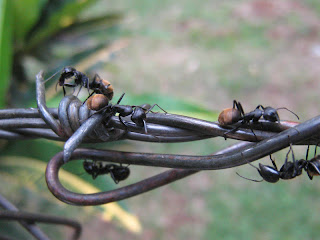 For those of you who were fans of the "Critter of the Day,"  I give you, the nastiest of all!  Anyone who knows me knows that I hate ants.  These suckers were pretty big and were wandering back and forth across a barbed wire fence just outside the front doors of the Guest House.  I hope that is where they will stay.