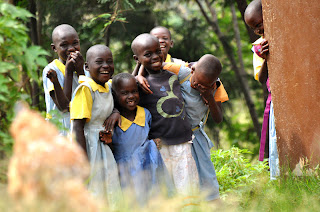 We got to the school by 8am.  Job had some family issues to contend with, so he apologetically arrived at around 9am.  We met with Charles again to discuss procedures.   Just to break up the monotony, we went to the courtyard to take some more pictures of the kids.  Wendy continues to wear her backpack (that still looks completely full) and it would appear she’s a big fan of crocs (sorry Amie). Simon’s (contractor) arrival was a God-send.  That meant we had to head up the hill to dig. 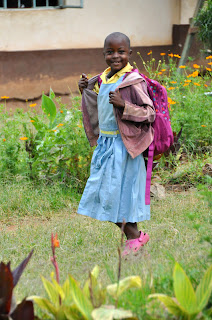 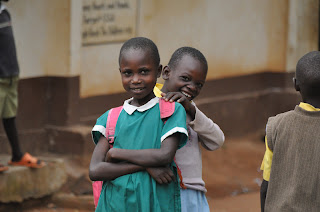 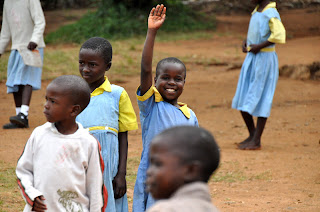 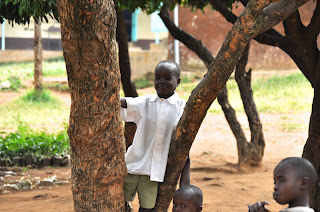 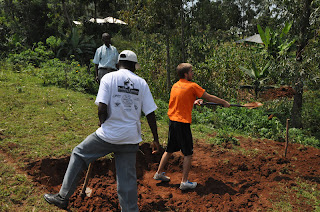 The placenta pits would have to wait – the septic tank was more pressing.  This one was about 10’x20’ and would eventually be 5’ deep.  We dug for a while, giving the fundis a rest.  They laughed as we dug.  Kevin was hoping that we had more spades to use, so I went down to the Primary School to inquire.  Another organization was building a latrine here.  In fact, it was being dug when we arrived.  As soon as I saw it, I knew there were going to be problems.  First, it was about 10’ from the classrooms.  2nd, it was at one of the lowest parts of the property!  Normally, latrines are 15’ deep.  They hit the water table at 8’.  So they moved it.  They started digging a few days ago because Marlene (from P.A.L.S.) came running into the office, “They need to stop digging, you can’t put a latrine 2’ from a garden!”  She makes a valid point.  I’ve digressed a bit, but they are now digging a latrine on a higher spot far from the garden.  What brings this story full circle is that the spades they were using were purchased by Building Futures.  This is where the politics come in… and the “possession is 9/10ths of the law.”  Long story short, we made due with what we had. 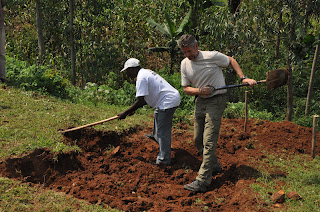 It was then time to “take tea.”  Nothing’s better than hot tea on a 90 degree day while your digging a ditch.  Kevin drank water and I had tea as we sat with some of the members of the clinic committee, Job and Samuel.  Groundnuts (peanuts) are always present, as was bread with olio.  After a few minutes, Samuel went and picked some avocados from his home.  They are significantly larger than the ones back home, and much sweeter.  I made avocado sandwiches.  We even got Kevin to try it, and he said, “not bad.”  I don’t know why, but they’re just different in Kenya… I would say that the taste is sweeter and cleaner.  We told stories while we ate, and when our bellies were full, we returned to the pit.  I made sure to put some suntan lotion on Kevin and I because the sun was peaking and it was really burning down on us.  We dug for a bit more. 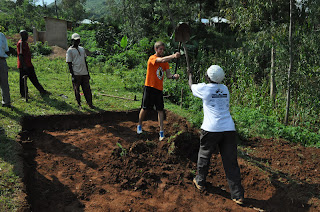 Simon, Job and I left Kevin and Caleb digging with the fundis so that we could talk about the next series of structures to be built.  Kevin later told me that the fundis were impressed that he didn’t get any blisters after digging for so long.  He explained to him how his hands get tough from lifting weights at university.  They joked around with him while they were working.

Kevin joined us a little later to take part in the conversation regarding the potential work to be done at the Primary and Secondary Schools.  We’ll get some additional quotes for Charles, but Simon’s work is excellent, and more importantly, he can be trusted. 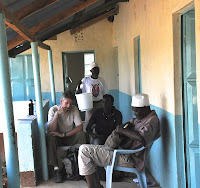 It was close to 3pm by now, and time for lunch (yes, 3pm, lunch).  Samuel had killed two of his chickens for us.  We began the walk over to the secondary school where lunch would be served.  We had some time while they prepared, so we paced of a potential site for a science lab and administrative block.  We moved around a bit and discussed what our options were.  The secondary school sits on a pretty good-size piece of land, and the layout is perfect for additional rooms.  We were told that lunch was ready, so we made our way to an empty classroom.  Samuel, however, had taken Kevin by the arm and taken him behind the classroom.  I didn’t give it another thought, but it made me think of someone being “taken out behind the woodshed.”  I was telling the story to the remainder of the group, and they told me they didn’t think Samuel would be beating Kevin.  I agreed, and realized that the story was lost on them.  The both emerged before we made it to the classroom door.  Kevin walked up to Job and said, “Sam is not bald.”  Job cried out!  Samuel finally showed Kevin his hair… underneath the head garment that he wears are 12” long dreadlocks that nobody has seen, and I mean nobody; except for Kevin.  Job began peppering Kevin with questions, and his answer was always the same, “That’s between Samuel and I.”  Samuel grinned with pride from across the table.  More stories were told, this group is big on parables, as we ate.  Because we were leaving for another round of skyping, we said our goodbyes to the majority of the group and pushed on. 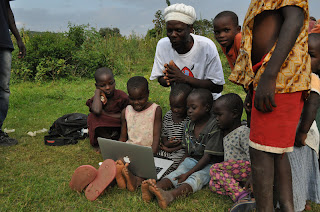 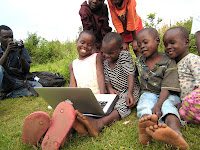 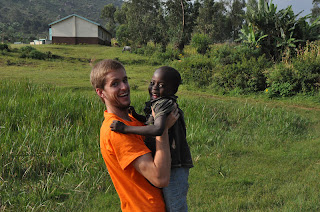 We went beyond the secondary school, almost to the field that is used for sports.  We found a nice patch of grass that was devoid of ants and sat down.  Susan, Emmah and Danton were already walking toward us to help close the distance that much faster.  They had remembered that we told them we would skype Andrea and Karen.  This is a real treat for them, and they love it.  I signed onto the computer, and sat Emma and Susan right next to each other.  I got Karen on Skype, then put the computer on the girls legs.  They were front and center when Karen said, “Hi girls!”  Smiles immediately came across their faces.  They speak very softly when we’re around so we constantly have to tell them the need to be loud.  They just seemed to sit in amazement that Karen, who was now joined by Andrea and our friend/interior designer John on the computer screen.  More smiles, and whispered “Hi.”  Their little brother Danton came in to joined in on the fun, so I place him behind the girls so he could see Andrea and Karen, and they could see him. Samuel and Job enjoyed it, too.  “Hallo, Hallo!” he’d shout, “How are you my friends? I miss you!”  Andrea asked, “Are you taking care of Kevin?”  “Yes, yes, yes,” he replied, “He is my good friend!”  Job then began teasing Karen about the dogs.  “I’m bringing a spear and I’m going to eat one of them while you are sleeping.”  It made the girls on this side laugh just as much as the girls on the other side of the camera.  To be honest, he seems more interested in Sox.  In fact, when Karen walked away from the camera to get Ann (we were getting ready to sign off), he was calling to Sox, who was still in the frame.  He was very disappointed that Sox didn’t come closer.  “Yes, that’s the one.  Katie will forgive me.”  This guy just cracks me up.  I can only imagine what Katie would be saying if she were there.  Andrea came back and asked where Kevin was.  He had found Bruce, Susan’s cousin and was playing with him through most of the skyping episode.  The talking was often interrupted by Bruce’s giggling as Kevin would pick him up high off the ground and hold him in the air while tickling him.  He put Bruce  down for a moment and brought his head into the screen.  “Hi everyone,” he said, then returned to Bruce.  We signed off and started heading over to see Ester (their grandmother) to say goodbye to her.  As we walked, Kevin said, “Mom’s got Susan, Karen’s got Emmah, now I have Bruce.  Katie’s going to have to find someone from this family soon.”


Ester was delighted to see us, and even though we were only able to stay for a short while, she insisted we take a papaya with us as we leave.  Before we walked out the door, Susan tugged on my shirtsleeve and in a sweet little voice said, “Where is Ann?”  Emma, almost at the same time, did the same thing with Kevin, “Where is Karen?”  We again told them how much the girls missed them and that they would come back as soon as possible to see them.  They ran out of the house with smiles on their faces. 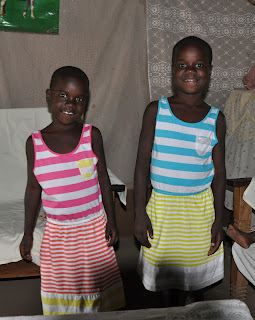 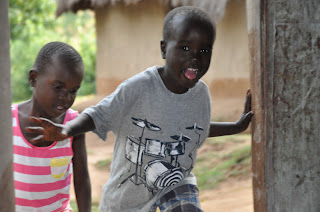 We went back to the primary school to say goodbye to Charles and any other teacher still left. It was now after 5:30pm.  We started the walk to Maseno.  Samuel and Caleb came with us to keep us company and show us a shortcut.  Well, at least they kept us company.  Although they said we’d avoid the hill, we ran into two more.  I practice my Luo and Kiswahili on passers by.

Job was waiting for us at the guesthouse.  He went on ahead of us to to print out the tickets for tomorrow morning.  We’re going to bring Job with us when we go to see him and his family in Nairobi.  I took everyone across the street for dinner at the Green Park Tavern.  Good food and more pleasant conversation.  By 8pm, it was time to move on.  The plane tomorrow leaves at 8:30am now, instead of 11:30 like before, so there’s not much time to rest.  It’s already 11:30pm, so I won’t be getting much sleep tonight.  Please forgive me if there are too many typos or sentences that just don’t make sense.  Ni mechoka sana (I’m very tired).

Then next time we speak, we’ll be in Nairobi wih Isaac.
Posted by Adam Jablonski at 2:10 PM