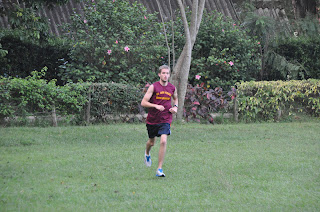 Another day, another run.  It’s pitch black at 6am, so we had to wait until 6:45.  Although the land appears level, there are enough little holes that Kevin would certainly break his neck.  That wouldn’t be good.  The sun was just clearing the trees when he finished.

We returned to the Guest House to find that Josephat was nowhere to be found.  He holds the key to the locker that holds the keys to the rooms.  You’ll probably have to read that a couple times before you grasp the concept.  As people leave, you leave your skeleton key behind.  It’s attached to a wooden block with your room number on it.  When you return, you retrieve the key.  It’s a simple process that usually works.  Josephat (or whoever is running the place at the time) lives in one of the rooms and is always there.  Except now.  It took another 30 minutes before I went behind the counter to find that the key was never locked up.  That was very fortunate.

We quickly changed and headed for the school. 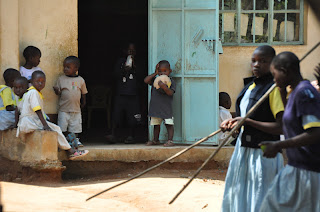 We got there by 8 where we took pictures during the assembly and met, once again, with Charles, the headmaster.  Another 2 hour meeting – Kenyans can talk.  There’s no such thing as a “yes or no” question.  Every response is lengthy, and includes stories and pregnant pauses.  I finally convinced him that we could not wait for tea and we headed for the clinic.  Simon had not arrived with the fundis yet.  We can’t dig until Simon arrives.  Welcome to Kenya.  Planning anything is difficult, because there are rarely guarantees… even when you fly half way around the world to be here.
We made some phone calls and sent emails in an attempt to set up an appointment with the American Embassy to get Job a visa to visit the US.  When we finished that, we received 4 visitors.  They came walking up the dirt path with John Ogungo and the area Chief.  They came from the Chulembo Hospital and were here to inspect the clinic and house.  They apparently have been discussing the site for quite sometime but had not seen it.  Now they have!  They were impressed with both structures.  In fact, two of them commented that they would like to be the ones to move into the house!  “Beautiful,” they said when they entered.  Immediately, the cameras came out and people started taking pictures.  The same events occurred at the clinic.  On behalf of the community, they thanked and praised us for the work we are doing.  They assured us that they would do anything they can to help get the facility registered with the government.  They thought the site was so beautiful, they asked if we could take their picture in front of it.  They asked me to join, too… bad day to wear my “Fly like a G6” t-shirt.  We will visit them at the Chulembo Hospital after Hilda’s visit.  They can give us additional advice on purchasing equipment for the clinic. 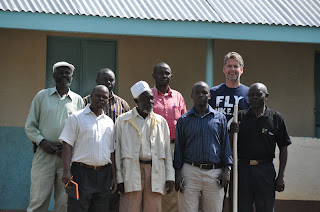 We then ventured back down the hill to play with the children while they were on their 30 minute break.  We’ll have to remember to bring jump ropes with us.  They don’t have rope, so they use long thick weeds tied together.  It’s pretty impressive, actually.  They had just finished playing double dutch when they dropped the “rope.”  I picked it up, asked Kevin to hold the camera, and much to their surprise (and mine) I jumped rope for about 5 minutes.  They all giggled and cheered.  When I stopped they asked me to juggle, so I did.  They handed me three pieces of brick, so everytime the pieces collided, little specks would fly into my eyes.  They thought that was funny too. 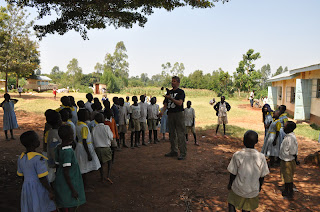 We then moved over to watch Susan and her friends playing a game that looked like hopscotch, but even Job wasn’t able to figure it out.  I’ll have to ask her about it the next time I see her.  Kevin continued to play with the children.  What starts out as primarily boys, soon turns into everyone under the age of 10.  He lie the pied piper. 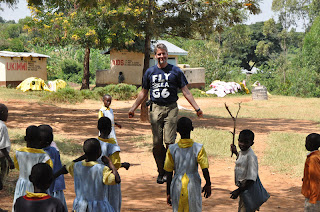 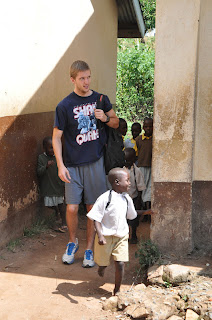 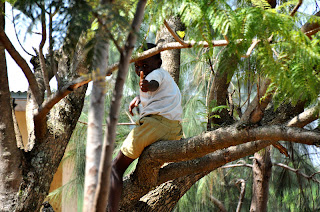 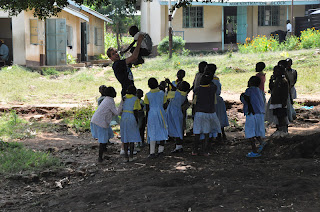 We then went back up to the clinic to meet with Simon.  He was supposed to come with the fundis and start digging, but his mom’s passing took precedence.  He still came, although alone, and sat with us for an hour talking about construction at this site, as well as what was needed at the primary and secondary schools.  He is a good man, and doesn’t mind people watching over his shoulder.  In fact, he was happy to have Samuel overseeing the supplies.  He thought it was an excellent idea. 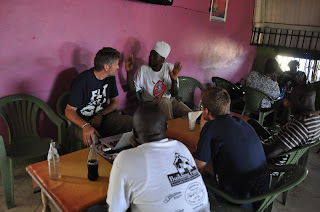 The matatu that was supposed to pick us at noon showed up at 2pm.  We then made our way to Kisumu for kuku at Mamba’s.  They bring out plates of chips (French fries) first, then bring out the whole chicken and cut it up for you… in our case, it was 3 chickens.  Job, Caleb, Samuel, Kevin and I (along with our driver Benson) devoured all of it.  It was a nice treat for the group.  Job and I thought it would be good to get all of the Building Futures employees together away from the school to talk about projects, and that is exactly what we did.  It was lively conversation that was incredibly informative.  Kevin and I both left much wiser than when we arrived.  Samuel, especially, doesn’t get to Kisumu often, so even the trip there was something of a treat.

We then had to return to the Masai Market to pick up some “special request” items that Andrea talked to me about the day before.  Job and Kevin came to supervise because they think I buy too many things.  We were looking for masks… very specific masks, and fortunately I found one; literally.  There was only one of these masks in the entire market.  I dickered as best I could, and we ended up leaving with two backpacks full of items… again.  I just love this place. 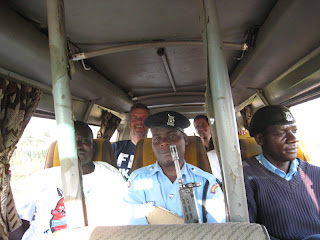 The van ride back was uneventful until the first police check.  They stop every vehicle and look inside – again due to Al Shabaab.  This stop was particularly interesting.  The van stopped, and as the officer approached the car he said, “Samuel,” with a wave.  The entire car too a breath in disbelief.  I don’t think we exhaled until the brief conversation they had was over.  It happened to coincide with the officer waving us on.  We drove through the road block where two officers with rifles waved us over.  Next thing we know, they open the door and get in, sitting down in front of Job and I.  I turned behind me and looked at Kevin.  He was pale and wide-eyed.  They closed the door, and the van drove on.  We were just giving them a drive to Maseno.  Job and Caleb spent the next 15 minutes trying to figure out how Sammie know the first officer that stopped us.   He refused to tell them, saying, “It was official business.”  I could see him grinning in the rear view mirror.  You have to understand that Sam is older than all of us, so he likes to take advantage of opportunities like this to get under their skin.  Job is 26, Caleb is 29 and Samuel is 56.  I started talking to the officers about what their work and how it was assigned.   Then I told them the story about Kevin’s first trip here and how he woke up with a gun in his face.  They thought it was much funnier than Kevin did.  Our friends were dropped off at the Chulembo stop, and we continued on to Maseno where we disembarked a few minutes after the officers.

Kevin called home to talk to his mom and sister, then I took the phone for a few minutes.  I’ve been trying to type the blog during the day, and I’ve managed to catch up this evening.  I plan on finishing at 8pm so Kevin and I can watch a movie together.  We’ve been trying to do it since we got here, but one of us always falls asleep.  It should work tonight.  We wish you could all join us!

Here's a picture of Kevin's drawers drying outside the guest house.  Nice. 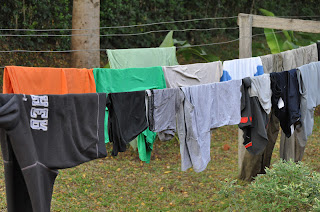 Posted by Adam Jablonski at 9:02 PM

No shortage of laughs with Kevin around...
Be safe.

Love all the pics!! Really appreciate you updating every day, Adam!! It must be tough when your days are so full.
When are the elections going to take place??? Soon?
Karen

The elections aren't until February, and based on what I've heard, there will be a "runoff." Ryla Odinga is the favorite, but he needs to get 50% of the country's vote +1. That will be unlikely with every tribe having a candidate. They're trying to beat him up pretty bad, but I don't know that it's working. EIther way, it would appear that the 50%+1 is a long shot, so then the top two finisher face off three months later. Every person I've talked to has said that this election will not be like the last one, "We learned our lesson last time. This year will be peaceful." We'll see.