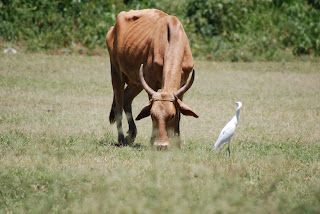 Another 90 degree day. I now understand why they refer to it as an "oppressive heat." Once again I find myself underneath a mosquito net... the exertion of typing is making me sweat! I'd appreciate an ice cube right about now.
We started with 7:30 breakfast. We both are quite tired of the eggs fried in corn oil, so we passed on those and went with tea and ndizi (bananas). That was enough, actually, to carry all the way until dinner, but we'll get to that in a minute.
We got to Mbaka Oromo at 10am, despite the school committee meeting being changed. We sat with the headmaster, William Kabis, for the next hour talking about the changes that need to be made to accommodate the requests of the Public Health Minister. It took some convincing, but he finally relented. William want to be in charge of everything. In this case, that's not a bad thing. He's a very competent headmaster... it's part of the reason that we've stayed with this school for as long as we have. We then were reviewing the cost of the kitchen because it seemed way too high. We hadn't compared it to prior construction costs yet (Jim's probably doing it now), but I did notice that they had put 42 tin sheets on the requisition form. That's a lot of tin! These tin sheets are used for the roof, and 42 could probably cover a building that's 100' long. We told him to suspend the building until we got some more info... he will continue to bring in more bricks.
After that conversation, he offered us tea, and I kindly excused myself. I can't drink HOT tea at home, and drinking it here is becoming difficult due to the temperature. I stepped out to take pictures of the students who were outside for recess. While the older children carried rocks from behind the primary school to the secondary school site (as pictured), I fooled around with the younger ones... juggling, joking, and butchering my kiswahili... on purpose, of course. These kids are adorable. 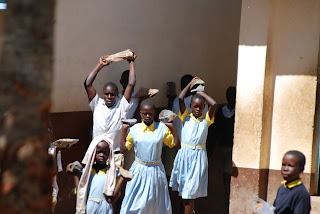 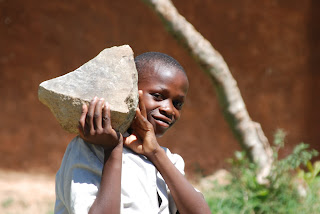 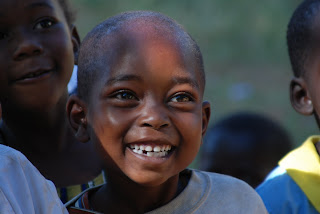 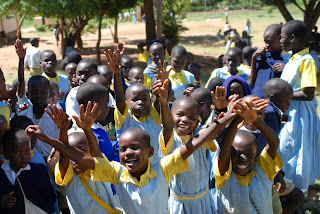 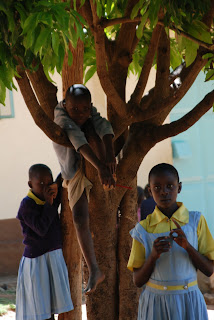 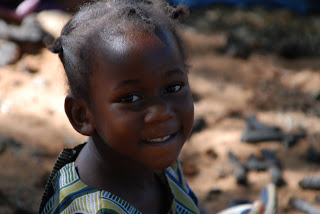 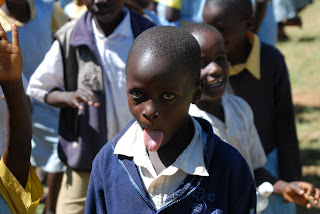 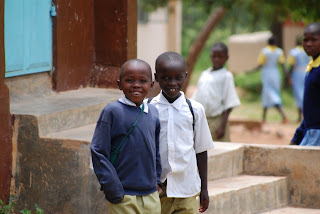 After about 30 minutes, I headed back to the main office. I knew we had to leave soon, as we were meeting a car at Chuolembo at noon. When I got to the office, John Ogongo had joined Jim, WIlliam and Lawrence, and he had brought a friend whose name we were never given. He was an older, portly gentlemen from Finland. He was incredibly unkempt. He looked like a hairier Lou Albano (again, kids, ask your parents... or google him). Scraggly beard, long scraggly hair... he looked like he just came from Woodstock. He said very little, which made me a bit uncomfortable. The best I could make out was that he's been in Kenya for 6 months, and was living in Chuolembo with his wife. He was seated next to Jim, and his size was preventing him from making a graceful exit. We finally said, "Sorry, we have to go." They walked us to the end of the property (termed "seeing you off"), and away we went. Samuel was hard at work in is "front office" pictured below.
The sun was high, and by the time we got to Chuolembo (12:20pm), our car was gone... Kenyan time runs +/- 30 minutes or less, so we were surprised that he was not there. It gave us the chance to run across the street for a cold soda. I found myself pressing as much of my body as possible against the concrete columns of the building in the hopes of keeping cool. The cement felt great! We located our driver, Joshua, who promptly picked us up and took us into Maseno.
They're continuing to "repair" the roads, so we new we wanted to get in and out as quickly as possible. Sitting in a car in this heat is not fun. We first ran to the Bank of Boroda to inquire about opening up an account. It seems somewhat easy, although i think it will help if we first had an account in the states. At some point, we'll have to go to NYC and set up an account. A corresponding account in Kenya is necessary for transfers, so we'll complete those tasks asap. It would make things easier, and more cost efficient. More importantly, the bank was air conditioned, and I didn't want to leave! We left anyway.
We then went back to Maseno to grab the Lady Lions t-shirts for the Huma girls. Jim was in the front seat, and I was spread across the back The sun was on Jim's lap for the 45 minute ride back to the Guest House. We were happy when the car began to move faster because the air finally started to feel a bit cooler. We got back to our rooms at 2:30, and decided to hold off on going to Huma until 4 - that was when Mareb said we should come. We were both exhausted from the heat, so we fell asleep for a short spell. I think that was the shortest nap I've ever taken. It lasted only 15 minutes, but it felt surprisingly good. Before we napped, we filled some small water bottles and put them in the refrigerator in the kitchen. When we woke up, they were absolutely delicious! I savored every sip of the maji baridi (cold water). We then hopped in the car, and made the 15 minute trek to Huma. Of course, Mareb wasn't there. She had gone to Kisumu. Jim had brought gifts from the sponsors of 3 of the girls, and this was our third attempt at seeing them. Fortunately, the new asst director sent someone to bring the girls to us. Nora came first, as Janet and Edith were taking exams. We sat with her for 30 minutes until the other girls arrived. Jim gave them both big hugs, and distributed there gifts. We talked about the baseball game on Friday (although I'm pretty sure it's going to be a softball game), and headed back home.
We decided to try the Trinity Restaurant out for dinner. We hadn't eaten yet today, and we both were happy to be hungry. Prior to this point, food didn't seem like much of a priority. Jim had dengu (lentils) and chipati, and I had beeg, sakumawiki and chipati. It was all washed down with cold Fantas. We slowly walked home as the sun was getting ready to set. We stopped at the equator for some pictures with Karen's elephant. Whenever I travel, no matter what the duration, Karen gives me a stuffed animal to bring with me. It's become common for me to take a picture with the him/her wherever I am. On my last trip to Kenya, I was accompanied by a horse. This time, it was an elephant. The students walking by were laughing as we posed. 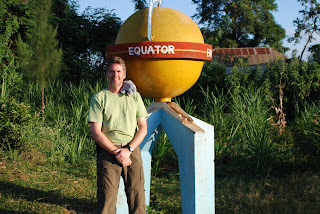 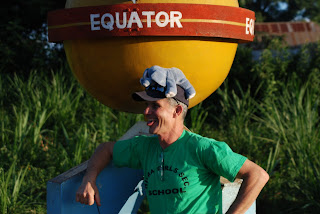 We continued on, but stopped at the Maseno marketplace for some tomatoes, onions and peppers with the idea of making omelettes instead of fried eggs in the morning. The only thing we couldn't find was the pepper. We'll survive.
I called Andrea as soon as I got in, then Skyped Katie. She had a snow day, and as Andrea guessed, she used it to sleep in. She had just woken up and signed on. We had a nice talk, and signed off. I went straight to writing this entry so that I can try to get to sleep early. It's 9pm now, so there's a good chance I'll get a decent night's sleep. The heat is definitely tough, though. My heart's been pretty good, but the last couple irregular beats I've had hit me hard because of the heat (I think). I haven't had to take a pill to correct it... they seem to go away as soon as I rest. I've told the story of my heart surgery a couple of times, and it's always met with a Kenyan, "Oh, I am so sorry." They ask me about the procedure and stare at me in wonder as I talk about it... constantly dispersing an "I'm sorry," between my pauses.
There's only a couple more days before my journey home begins. I CAN'T WAIT TO SEE MY FAMILY! It's ONLY 84 in Nairobi, so I'm glad I brought a jacket.
Oh, here's the latest critters. 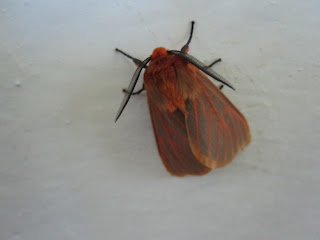 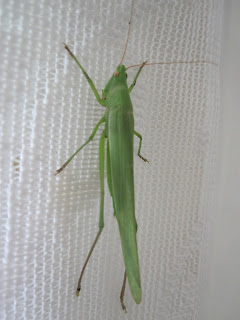 Posted by Adam Jablonski at 7:33 PM