The day started at 7am, and ended at 7:15pm. It actually started at 4am when I Skyped Andrea, Kevin & Karen. We had a great conversation, as usual. The only thing missing was the video! That made me a little sad, because I love seeing them. Kevin was up to his usual antics, so that got me laughing. When I told him about Bjorn and his man purse, he said, "It's a satchel, and it's very fashionable." - a quote from the Hangover. Super. Normally it's always from Anchorman.
We took a matatu to Chuolembo, and arrived at about 7:10. We then began our usual walk to Mbaka Oromo. We wanted to be sure to get there for opening ceremonies. This morning was cool, and a very welcome change. We continued to talk as we walked, although this time, I'll only give you one quote. It happened to be the opening line from Jim. "Tell me if you've ever experienced this." (insert dramatic pause, look into camera, insert dramatic music... fade to black). Yeah, enough said. We laughed most of the way their, and I'm not even sure I heard the entire story. I assume that Kenya is no different than any other country... it's loaded with beautiful, inquisitive children. These two were no exception. Their mother, however, was very camera shy. By this time, the sun had risen to about 30 degrees above the horizon, and it was as if someone turned on a gas fireplace. It seemed to almost immediately become 85 degrees. 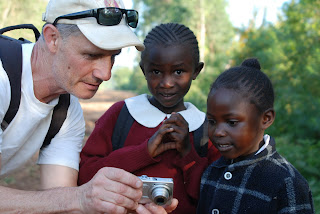 We continued walking, and made it to the school in time. The opening ceremony is quite a production. It begins with the raising of the Kenyan flag. In this case, it was a new one... significantly larger than it's predecessor (which by the way, looked like it had been through a war). A young student would raise the flag after a series of salutes and marching steps. A brief song is sung, then a verse from the bible, then a prayer. Yes, the ACLU would have been going nuts. It was quite beautiful, actually. All the while, birds were chirping, cows mooing etc. It's a beautiful setting that I'm not able to capture on film.
The headmaster then addresses the assembly. He speaks about the work we have done, and the work that the students have done, and how the two go hand-in-hand. Next, Jim speaks, then, me. No, not my finest hour. Jim tells me that I talk with my hands a lot. I don't think it was my finest hour, and although I should be used to it by now, I still find it a bit unnerving. It's not as easy speaking to Kenyan children as you might thing. Next time, I'll try a pratfall to lighten them up. 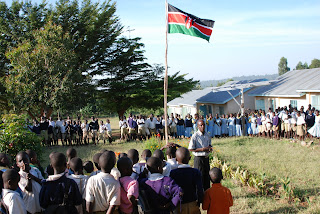 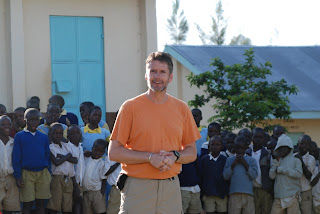 Once completed, the children are instructed to go to their classrooms. Always obedient, they immediately oblige. The only stragglers are the kindergartners... they wander a bit until their teacher corals them. I snapped a couple of photos, then dropped my pack in the headmasters office. Everything seems heavier in this heat. Maybe Jim put a bunch of stuff in my pack when I wasn't looking... in any event, a GOOD backpack is a must in this country if you're going to be doing any walking. 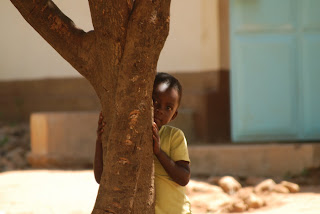 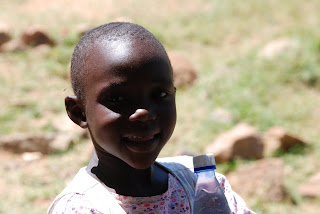 Jim and I then headed over to the Secondary School to see about the positioning of the kitchen. We told the fundis (workers) where we wanted it, and watched as it was staked out. It was toward the front of the property, where the brush was very tall. Enter the Kenyan ginsu. A panga (machete) is used for just about everything. It's a lawnmower, it's a hedge trimmer, it's a saw, heck it may even be a razor! Why the tallest guy is bent over, ostensibly cutting the grass with a machete is beyond me, but that's just what he did. In no time, the area was cleared, and the foundation was beginning to be cut out. I commented to Jim that these four guys didn't need two supervisors, so I went back to the Primary School in the hopes of escaping the sun. No such luck. At the end of the Primary School, the kindergardners were playing jump rope... well, at least it was "jump=something." Note to self: bring jump ropes in May. They were trying unsuccessfully, but enjoying every minute of it. It was then that I walked down to join them. I shook the teachers hand, and she immediately asked when we were going to be in Huma next. When I told her, "Today," her eyes lit up. She has a daughter in form 2 (10th grade), and wanted me t take her a letter. But wait, that's not all! Her daughter also needs a uniform, and a sweater, and some spending money. I told her I'd help (all those things amounted to close to $30. She said she'd bring me the letter, and I headed back to the small children. Little did I know that I wouldn't be able to shake them. I started juggling which always draws a crowd. When I'd grown tired of that, I scooped one of them up, and swung him around like he was an airplane. She was scared at first, but she soon started laughing, and loved it. The next hour was filled with ,"Me too!" By the time I was done, I was exhausted. So much so, that I had to seek solice in a tree. It was a huge shade tree that I didn't expect them to be abe to climb. I could barely get into it! They, didn't have a problem at all. If one was too small to reach the first limb, another one would push them up into the air until they reached.
I sat in the tree for about 15 minutes. It was actully a pretty comfortable spot, until the teacher returned, and asked me to come into her class. 5 Minutes later, she was telling me how her walls need posters, and her students needed books, and she needed spending money. I said, "It's either your daughter or you? What's it going to be?" She said nothing, so I assumed that the deal with her daughter prevailed.
I stepped outside, and headed to the library. It was quiet, but that didn't last long. A loud bell ran in the couryard, and children came running. I mean literally, running. The library is a popular spot, and the kids are eager to get in to take a seat and open new worlds. 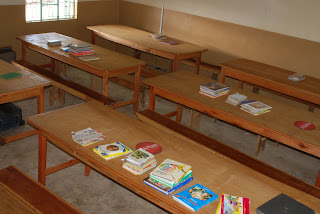 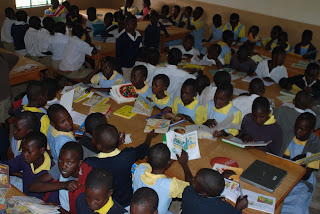 It was early afternoon, and Jim and I decided to take a nap in the library. He laid down on two benches that he put side by side. I just put my head on the table, and bam! Lights out! Sadly, 15minutes later, Christine (one of the teachers) woke us up to tell us lunch was ready. Kuku, sakumawiki, and rice. I think I've been here so often, that I haven't been telling you about another Kenyan tradition that is a must. Before eating, someone will normally bring in a basin and hot water. The basin is placed in front of you, you place your hands over the basin, and hot water is poured over your hands. You rub them briskly, and splash the excess water on the ground. Now you can begin eating. Regardless of the cleanliness of the water, they now consider your hands clean. The food was good, and now it was time to walk toward the spot where the Huma bus was going to pick us up.
We got there a bit ahead of schedule. We were told we'd be picked up at 3, and it was 2:55. At 3:30, we decided to walk a little more. Finally, after several ineffective phone calls, we found the bus, or rather, the bus found us. We all climbed in, and started toward Huma.
At this point, I'm just gong to introduce you to the new "Huma Lady Lions." It was a great game, but I'm just too tired to write. My apologies. It was a wonderful game, that I'll tell you about tomorrow. 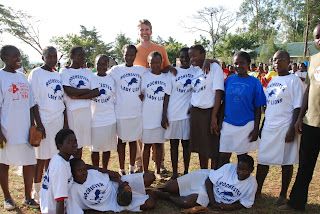 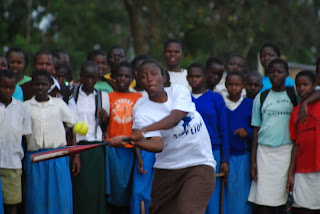 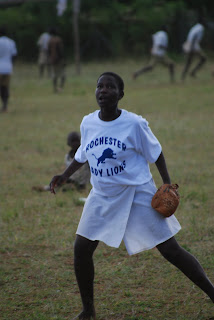 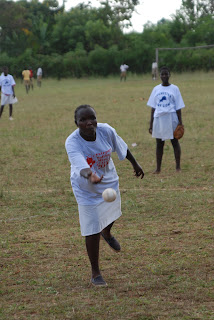 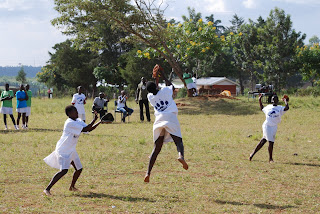 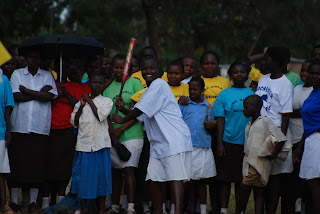 This little sucker was about an inch high, and 2 inches long. Nice. I bet he's crunchy. He's more than likely the last of the critters. 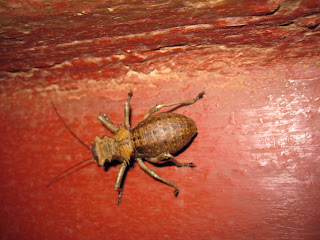 HI Adam!!
Well, I finally got through all of your blogs today. I am so impressed and honored to know such a person as you. The information, messages and the pictures you've shared are fascinating, educational, and inspiring. Thank you so much for taking the time to share so much that most all of us have no clue what is going on in our world outside of our own little areas. Sharing of your experiences is incredible (except maybe we could have been excused from hearing of Jim's issues one day and what you gave him to help his upset stomach!). :-)
Again, this was wonderful and here's praying for you to arrive home safely!