What a wonderful day that followed a wonderful evening last night!  Despite the storm, I had a great signal so I talked with Andrea for quite some time before calling her on FaceTime.  I love being able to see her!  We had some wonderful laughs and the timing was perfect.  Just enough to get me through the remaining days here in Kenya.

We were walking to Mbaka Oromo today; not so much to see the schools as we were interested in seeing Sam's family.  We spent practically the entire day with them!  As we departed, I heard loud music approaching up the road.  "Advertisement," was all that Job said.  The music was right over my shoulder so as I turned I saw a big truck with "Good Bread" logos all over it.  I also saw that it looked more like a float in a parade.  In the flatbed in back were two girls dancing to the music.  "Is that supposed to get people to buy Good Bread?" I asked.  Job replied, "I don't know.  They think thaht eef you eat the bread you khan hahve the gahls too," and laughed.

The walk to school took much longer than we expected because we continued to run into people (friends and strangers alike) I hadn't seen yet.  It started as soon as we crossed the street at the matatu station.  The piki-piki (motorcycle) drivers were insisting that we take some photos with them.  This group is always changing.  I took some pictures back in January and brought some copies for each of them.  Slowly but surely we've been bumping into one of them at a time.  We checked off another one today.

I made it a point to stop by to see the woman that thought I ate dog meat.  Job told me that she sells mandazi (like a fried donut) so I thought we'd buy some to eat as we walked.  No such luck, though, as she was making chapati (kind of a bread substitute) this morning.  I asked her if she had any dog to sell and she broke out in laughter.  Apparently she thought I was of a nationality that is rumored to eat canines... I assured her that was not the case.  We laughed about it some more before saying goodbye.  As we walked away, Job told me that she said she was afraid that I was coming to have her arrested.  That made ME laugh!
We walked a bit further and ran into one of the past Clinic Committee Members.  He was headed to the main road and didn't have time to chat so we continued on our way.  The road was quite busy with  people bringing animals to market and piki-piki drivers transporting goods and people, as well as the usual walkers getting from here to there.

We passed men, women and children working in their farms or

performing daily chores like fetching water from the stream.  Younger children were usually huddled together playing with anything they can get their hands on.  In one case, a group of five were simply playing in the mud.  Many of the younger ones, even if they're not alone, will stare at me inquisitively as I approach then run way in terror as I get too close.  That's how you can always pick out the ones that will be in charge as they grown up.  We came upon a group of four.  As we got closer, one ran away, two stood frozen and the last one slowly approached with a stern look on her face as she extended her hand to greet me.  Yup, she'll be the one in charge.  It's like being able to see into the future.  Once that first brave one shook my hand, the others followed suit.  Works every time.

We arrived at Sammy's to find that one of the tents was still standing.  There were about a dozen people still there... along with the guy trying to get rid of his remaining photos.  The resin chairs had all been removed, and all that was remaining were a few benches.  Sam's boys stopped what they were doing and brought out a table and some chairs.  They brought out more chairs than we needed, but they were soon occupied by Sammy's sisters and brother.  John Anguso was among them. 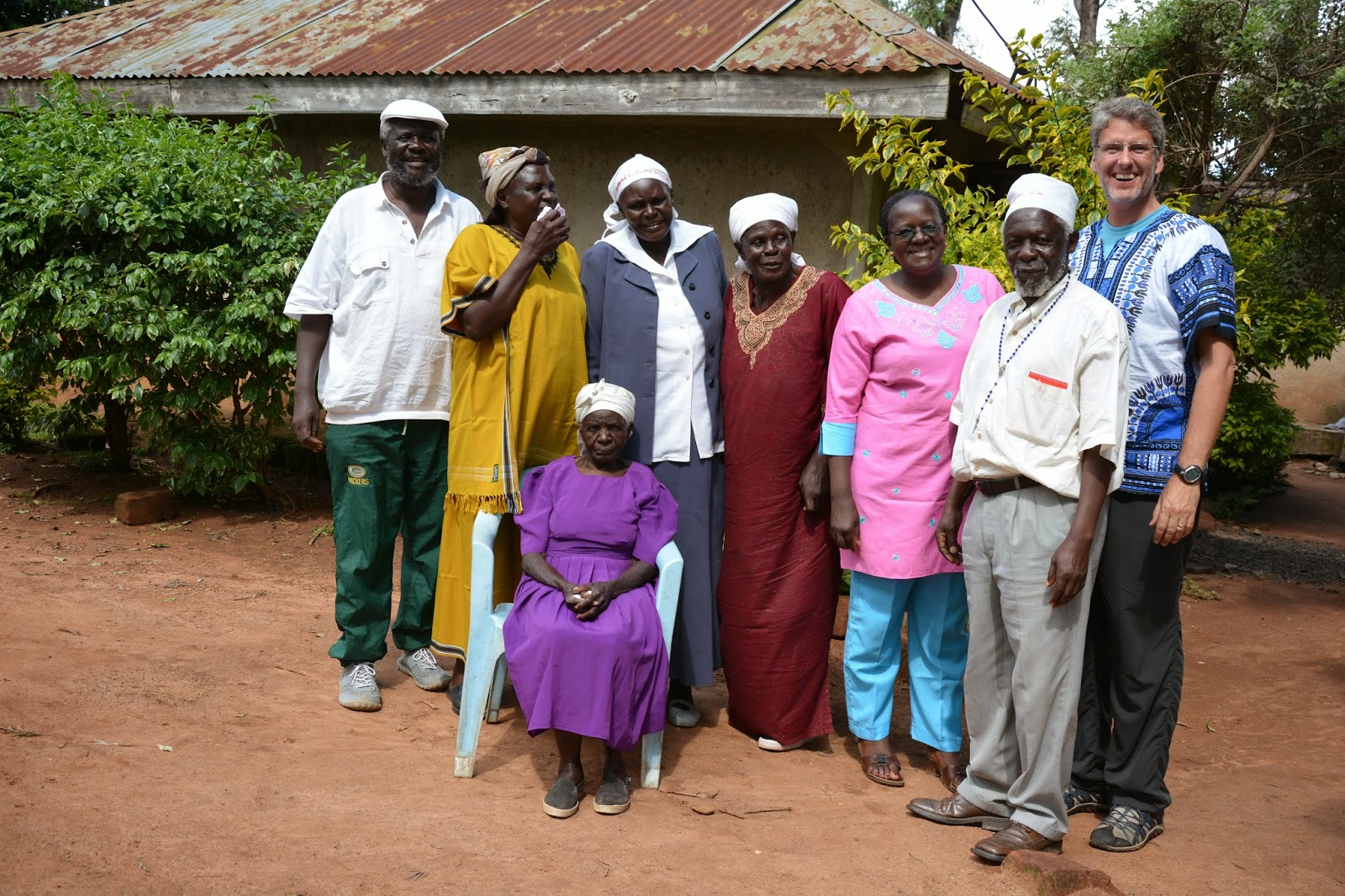 Once finished, I asked if I could take a picture of everyone.  They happily obliged.  We laughed as we realized that all the Catholics were together so the picture wasn't balanced.  Even the part-timer was with us!  Everyone laughed again.  We said our goodbye's and began our walk up to the clinic.  Before I forget, as I said before Alex is the first born son of Sammy and Olive.  Because there are so many Alex's in the neighborhood (and two in the family) everyone calls him Mickey when he is home.  His full name is Michael Alex Oguso... Mickey is his nickname.  I saw Mickey's wife with there son and snapped a picture of them before leaving.
The clinic looks great.  I can't believe how fast the trees are growing.  We still had a small shed on the grounds with some materials that were going to waste.  Termites were getting into the wood, while other materials were just sitting there being useless.  I was concerned about thievery now that Sam wasn't around to keep an eye on them so I made a unilateral decision.  I summoned the Sam's sons to come over.  In front of the Clinic Committee chairman (John), the lead doctor (Dr. Pio) and Job, I told them how grateful I was for their hospitality, and how grateful I was for their father's friendship.  I continued that it would be fitting that they take the remaining items rather than letting them go to waste.  They were very grateful and will use the materials to build a home for Ben.  Another of the many signs I get when working here.  You see, Ben is the tallest of his brothers and looks the most like his father.  Now we're helping him building a home.  Perfect... he will probably be the first face we see over the cornstalks as we walk to school.

The clouds were starting to make noise again, as if to remind us they were still brooding.  Dr Pio gave us a quick tour and updated us on some repairs that they made.  He then offered to drive us back to the Peacock so as to avoid the rain.  As we departed the compound a group of children were returning from the bush with firewood perched upon their heads. It was quite a site so I asked Job to snap a picture (he was holding the camera).  As they walked away he came up to me and said, "That's Susan and Emmah!"

"Wewe" (pronounced "way-way" - "hey you!").  They stopped as I scurried down the hill.  As I bent down to see beneath a ridiculously large collection of twigs, I could see Susan's smiling face.  Emmah had to move the leaves that were cushioning the weight for me to see her face.  Seeing these two lovely girls was the perfect ending to the evening.  I informed them that I was coming to see them tomorrow.


I don't think the smile left my face as we drove home.  I was quiet and contemplative about the day's events.  Like I said in the beginning... what a wonderful day!