Today was planned as a day of fun, and it was... almost to the bitter end.

The rain has been pretty constant all week; everyday at 6pm, then on and off through the night.  The roads show it, but it's nice to not have to deal with the dust that's usually kicked up.  With the roads this wet, the only thing that's bothersome is the diesel exhaust. 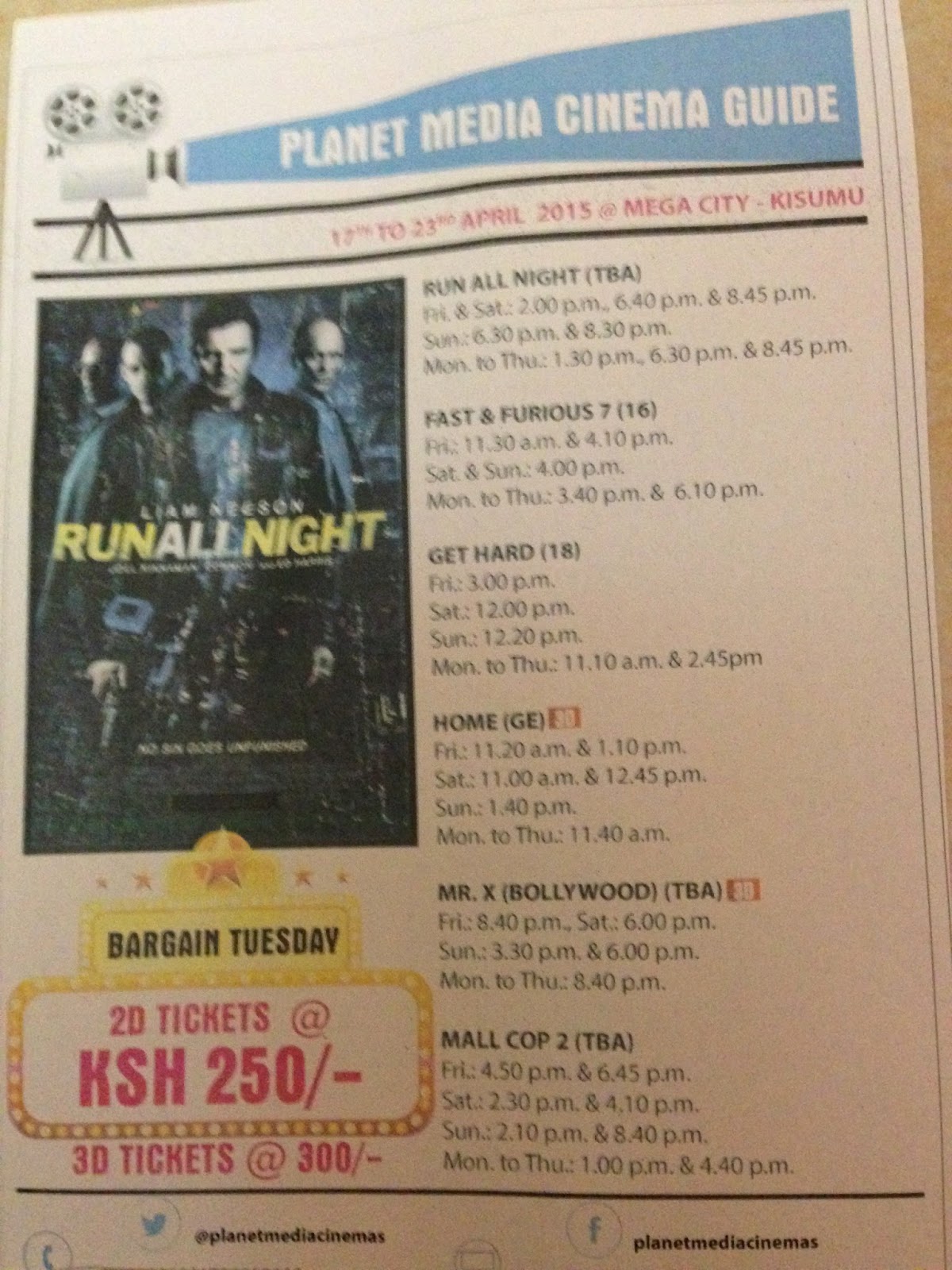 We left the Peacock at about 9am heading for the Nackumat to pick up some fresh water and supplies (food stuff) for friends of ours that I'll be seeing tomorrow.  While there, Job ran upstairs to the cinema to see what time the movies were playing.  Here's what he came back with...
Success!  It was already about 10:30 when we left the store, so we had time to get to the Masai Market before the movie started.
Two things you need to know about the Masai Market:
1.  There are no Masai there.
2.  It's a barterers mecca.
They start RIDICULOUSLY high.  So much so, that you force yourself to say half of whatever they say.  Then it's back and forth.  I tend to cut to the chase much faster and normally have quite a bit of fun doing it.  The dirt road is lined with lean-to shops - probably 15 on either side.  You can't walk by any of them without hearing, "My bruh-thuh, please come see my shop!"  Every shop has a common wall with their neighbor, so it can be quite overwhelming.  They've got tin roofs so it's like walking into an oven.  Also, you don't usually want to walk inside any of them unless your comfortable having to nudge them out of your way so you can exit - it's an oven that doesn't let you leave.  And never, EVER let them hand you something.  That's the kiss of death.  They won't take it back, and if you try to put it down you can expect to have two more items in your face immediately.  Sounds like fun, right?
Anywho, it was a productive day.  These shop "owners" rarely change so I've got some favorites, although one (Beatrice) got knocked off her perch this time.  She has been replaced by Elizabeth.  This girl knew how to sell!  She didn't start crazy high, but she held her guns and talked endlessly about the quality of the product and the craftsmanship and how you won't find them elsewhere and how she wants to work with me... the majority of the other people can get annoying, but I enjoyed dickering with her.  I'm sure I'll see her again.  I made some good purchases with specific people in mind.  I can't really talk about them, though, because that would ruin the surprise.  Trust me, I did well.  I will say that I was looking for things that I'd never seen before and after purchasing a couple Nativity Scenes, the other shops were onto me and pointed me toward what they had that resemble anything from an angel to... well, anything close to faith-based.  Here's a little something I saw but decided to pass on.  Very cute angel, but... it looked way to much like a toilet.  There, I said it. 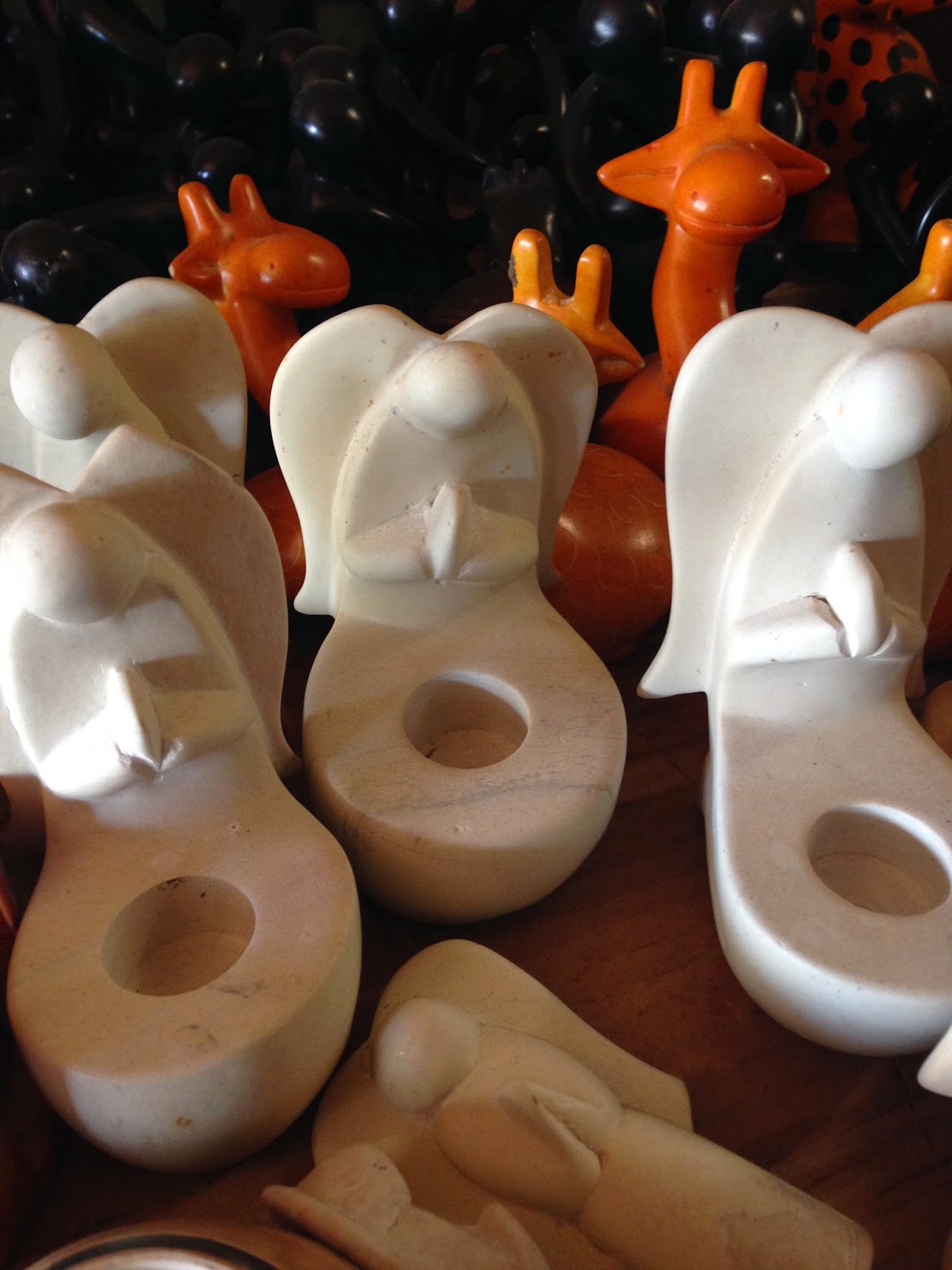 We got back in the car and headed over to the cinema.  "Get Hard" was playing at 12:20pm and Job really likes Kevin Hart.  In a country that's filled with cornfields, I fully expected popcorn.  Anyone who has ever been to a movie with me knows that if there's no corn, somebody's gonna get hurt.  Thankfully, they had plenty... and candy... and soda.  If it weren't for the prices, you wouldn't know you were in Kenya!  The ticket was $5.50 - I reserved judgement until I saw the seats.  The popcorn was $1.00.  That was a great deal!  No butter machine, but I'm a purist so it didn't bother me.  We headed to the theater and found that we were the only ones there.  The seats were very typical to what you'd find in the states AND they had the A/C working.  It didn't feel like it at first, but when we exited through the doors the heat hit us like a slap in the face.  I must say that I enjoyed the movie.  Nobody's getting an Oscar, and the story was predictable, but it served it's purpose.  We laughed.  We laughed a lot.  Just what the doctor ordered. 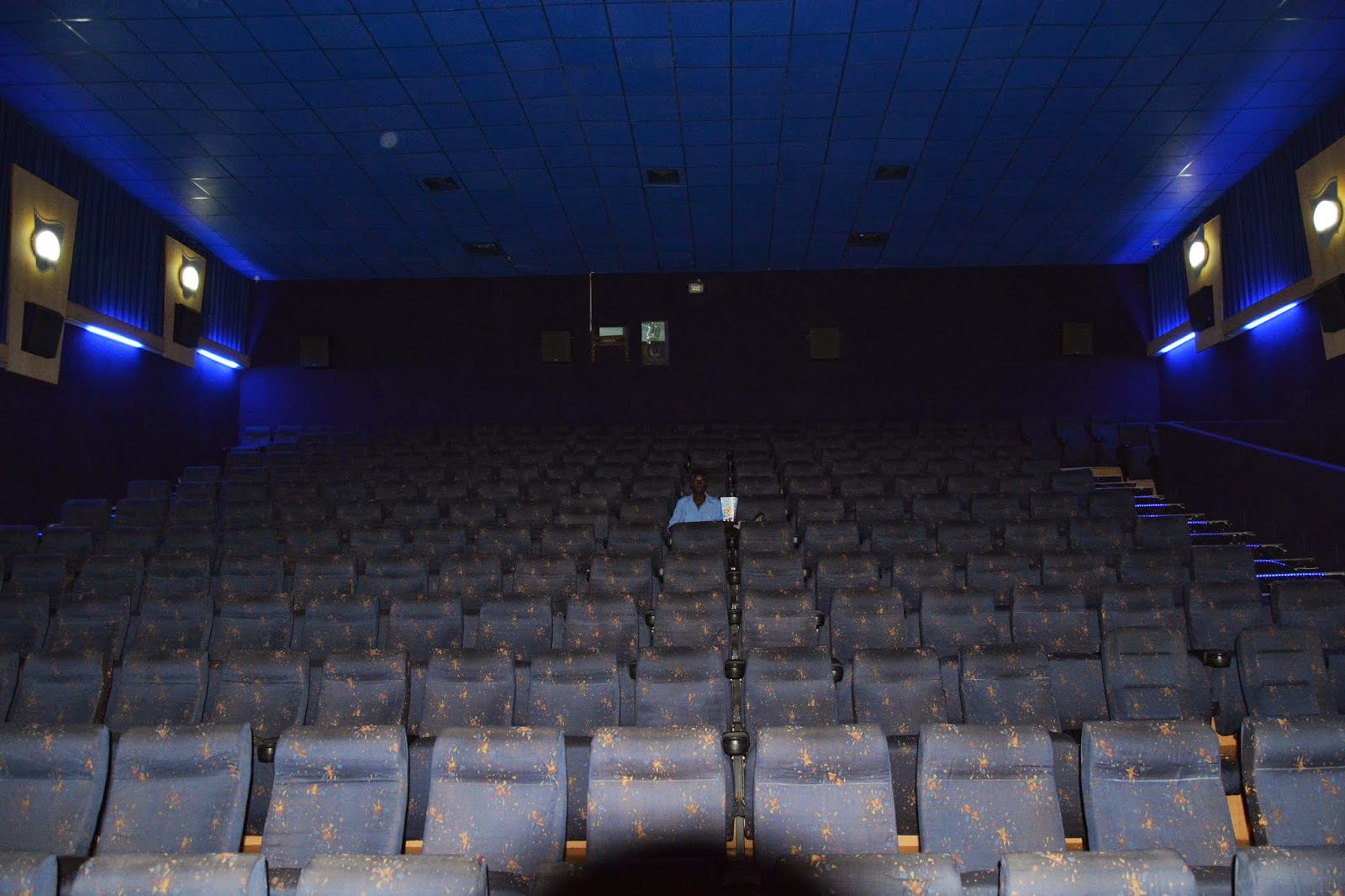 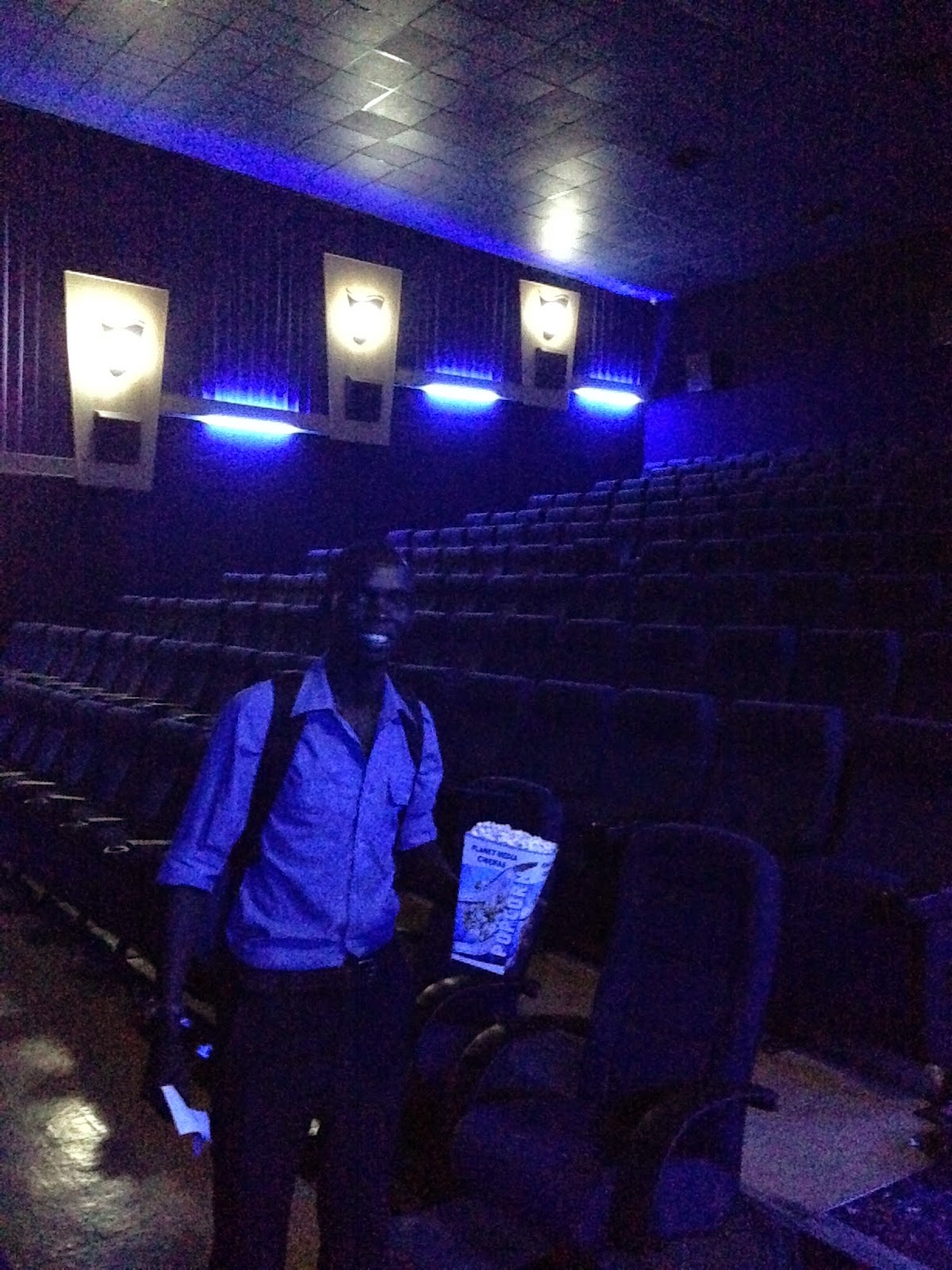 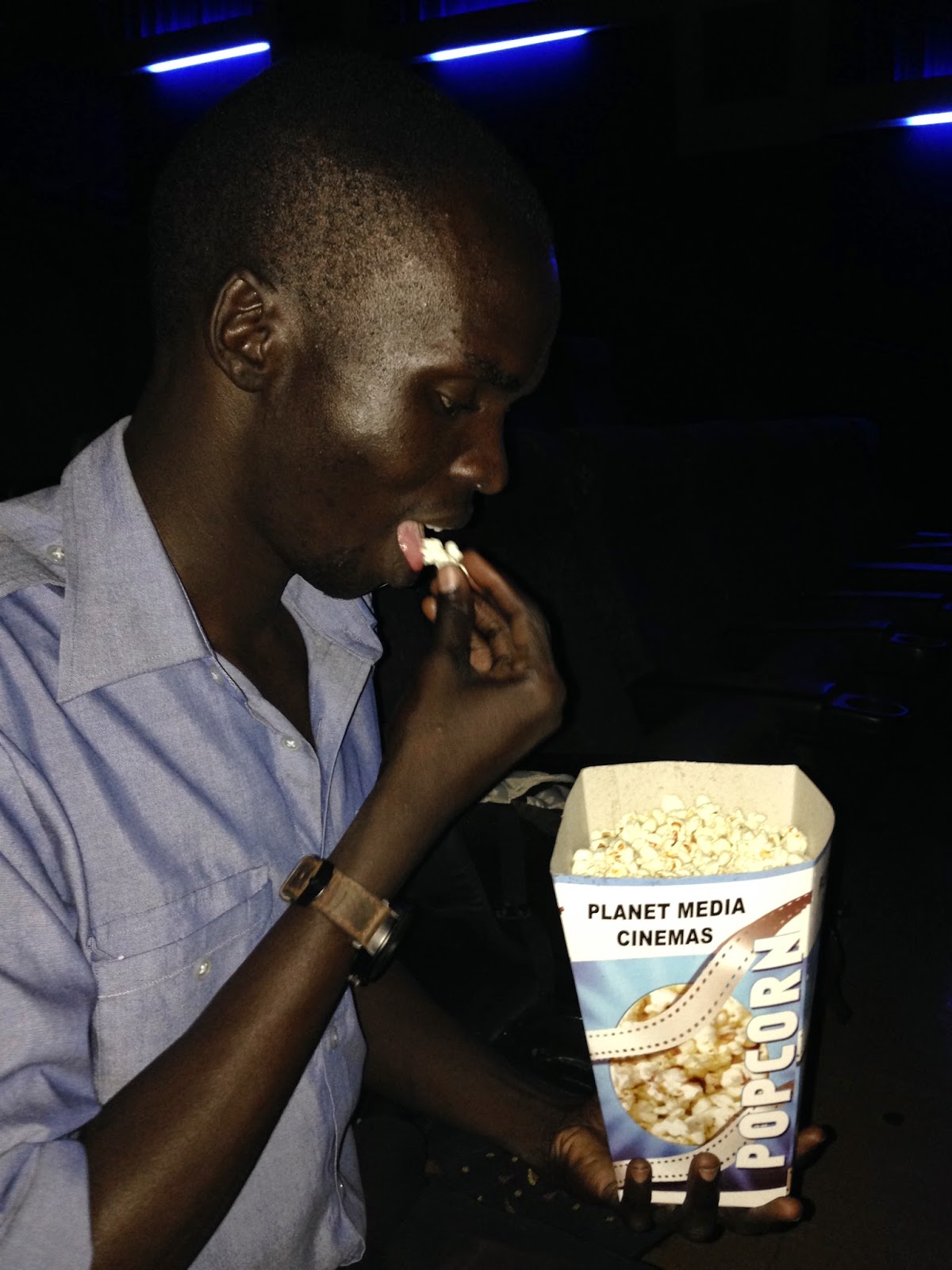 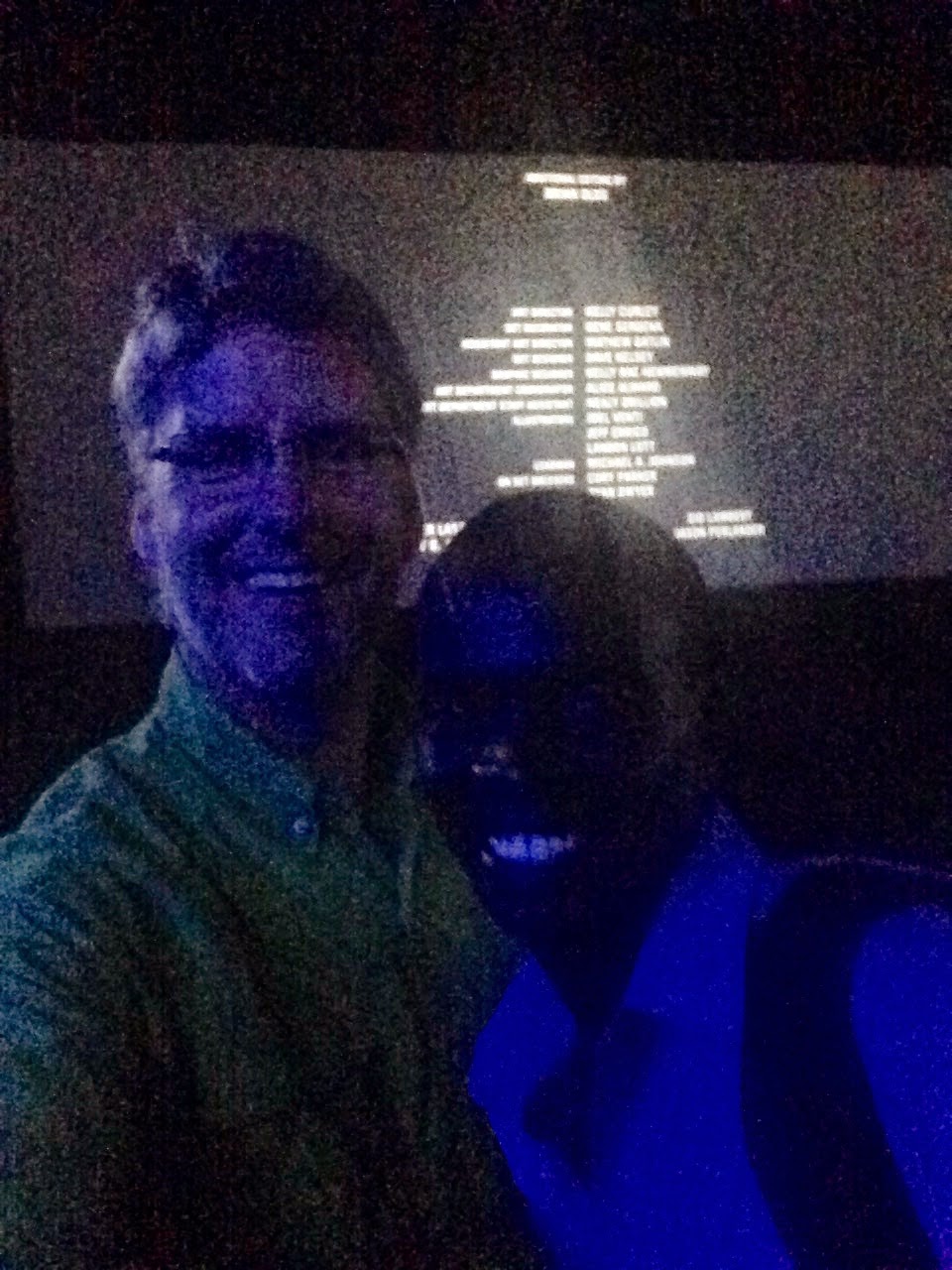 We then headed over to a restaurant for lunch.  Job had tilapia and i had kuku.  Then back to the hotel.  Although the ride between Chuolembo and Kisumu is on a paved road, it's not an easy ride.  The potholes are insanely dangerous (and I live in Rochester!).  Some of them here are over 1' deep and can be anywhere from 2' to 5' wide.  Then you add in the fact that there's only one lane north and one south, so everybody is driving into your lane to save their suspension.  They have some type of communication between drivers using flashing lights and blinkers, but I've never managed to figured out how it works.  All I know is that it's a good idea to look out the window... and keep looking out.  As we began driving up into the hills, the clouds had already begun stacking up.  "Tonight's going to be a doozy," I thought to myself. 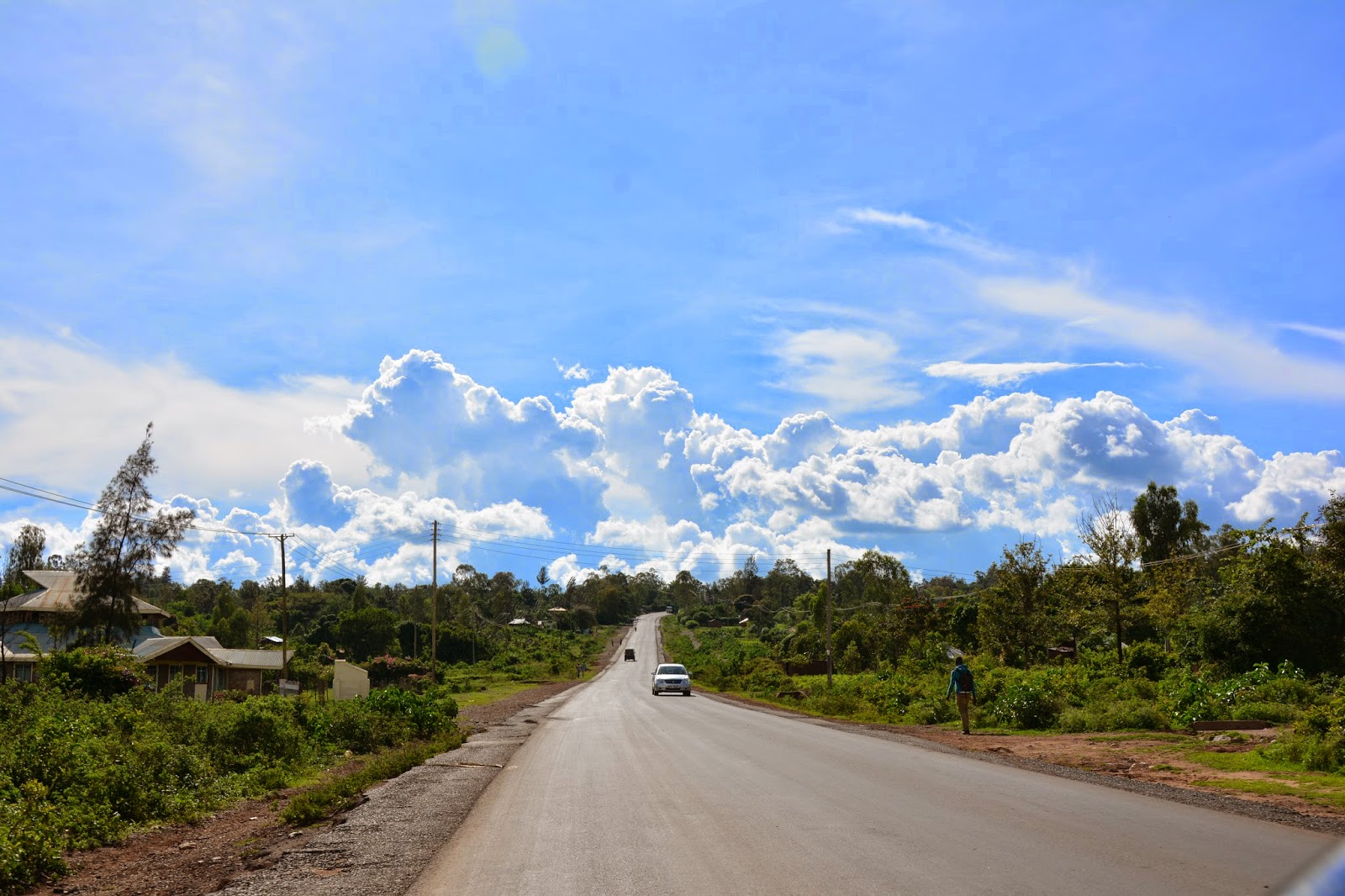 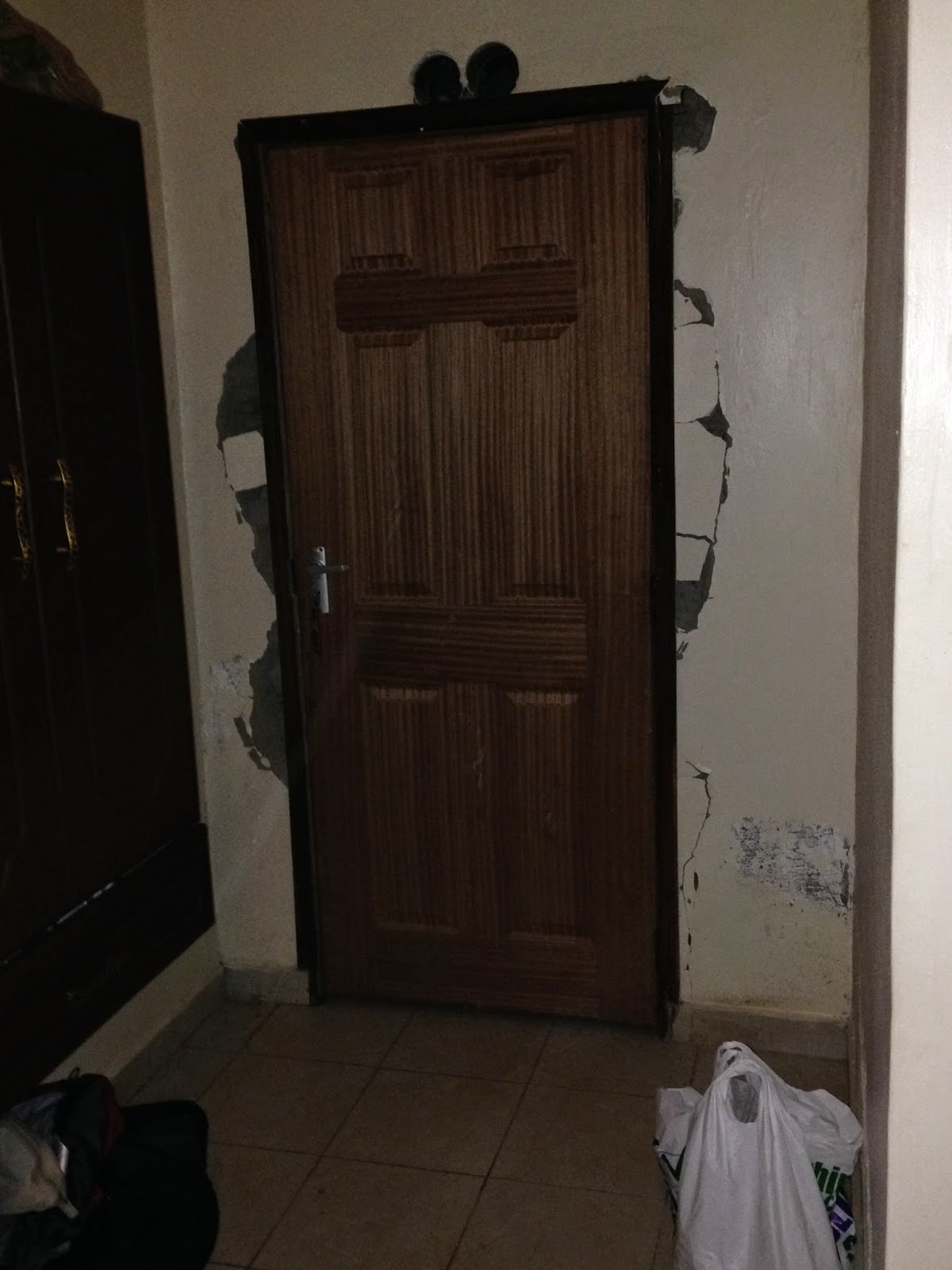 We got back to the hotel and headed for my room.  When we turned the corner there were 2 fundis (workers) infant of my door.  The only catch was, the door wasn't attached.  They were installing a new one, and planing it right there in the doorway. Shavings were everywhere.  I clearly couldn't wait in my room, so I took my computer, went outside and had a cold Tusker.  After about 45 minutes I was able to return.  It's a beautiful door, but I would have thought that they'd fix the wall first.  I guess the door was easier.  In case you're curious, that's a picture of the INSIDE of the room.


At about 6:30, the rain started.  Thunder, lightening, and buckets of water!  It's 8:30 now, and it still hasn't stopped.  I'm going to get some shuteye before I get up to watch mass at 6pm (EST).
Lots to do tomorrow, so the extra sleep will come in handy... assuming I get it.
I sent a text to Job about some changes in plans for tomorrow the week.  Here was the end of the exchange. 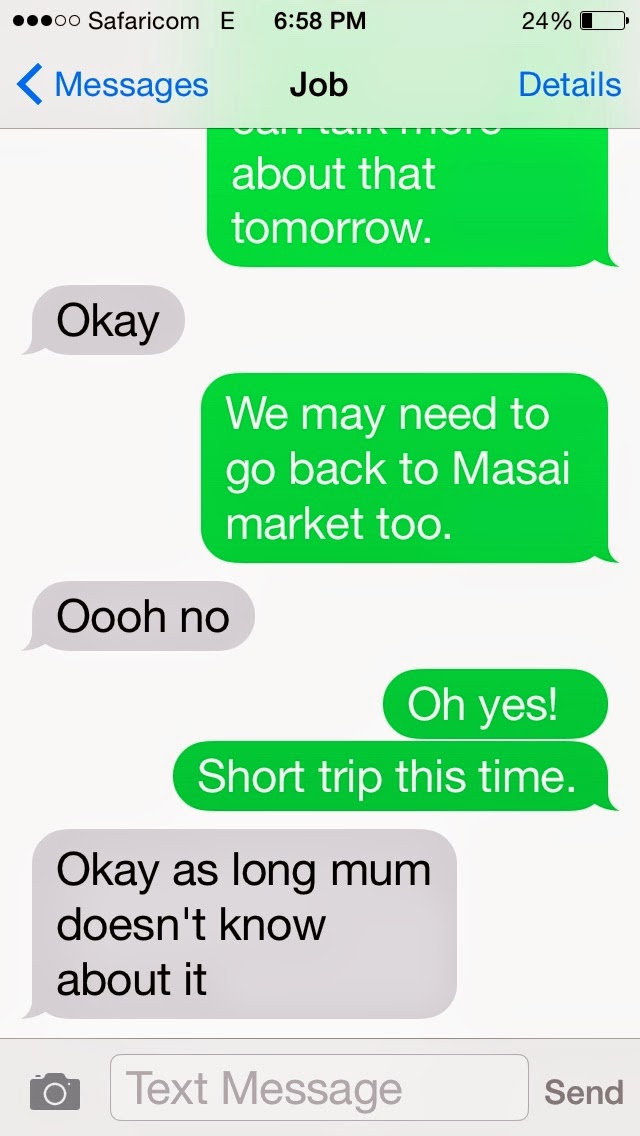 Job does NOT like the Masai Market as much as I do.
Posted by Adam Jablonski at 8:51 PM