Another night of heavy rains, but that didn't prevent us from getting our work done.  We started at Chuolembo Hospital; just a short walk from where I'm staying.   The hospital's primary function is treating HIV/AIDS.  Tom Odeni has worked there for quite some time, and now, Hilda Ayeko has an office there (although she still works for the government).  They were the two individuals that were so helpful in getting the clinic started. We sat with Tom while Hilda was finishing up with a  meeting.  She was only able to join us for a short time as there were other meetings she needed to attend.  They have always been very supportive and have been keeping a watchful eye on the clinic to ensure it's success.  They informed me that there are other government officials that would like to meet us and thank us forthe help that we have provided.  If that is meant to happen, it will happen.  We next headed for Huma Girls Secondary School where they were finally able to level their old laboratory.

Just before construction began, the government decided that there wasn't enough space for the previously approved site.  The school was in the middle of constructing a new lab and the original plan was to build them both at the same time then bring down the old lab.  Plans change, as does the government's mind, so this is what we're left with.  "You've gotta dance with the girl that brung ya."  I'm not sure who said it, or where I first heard it, but it's appropriate.  Within the last week, the lab was finished so the demolished the old one.  It's also helpful that the students are on break right now.  It will take 4-6 weeks to complete the project.  Once finished, the building will be used as an incentive - the best performing students will reside in the new dorm.  This is a very successful and competitive school so that formula should work out well. Merab Nayapola, the school principal, was very upset that the work wasn't done and terribly apologetic.  Hakuna matata.
The ride back into town was nice.  The red earth is always a nice stark contrast to the lush green vegetation that engulfs this region.  Again, the added water keeps the dust down.  Judging from the sight ahead of us it would appear that we're in for more of the same today/tonight. 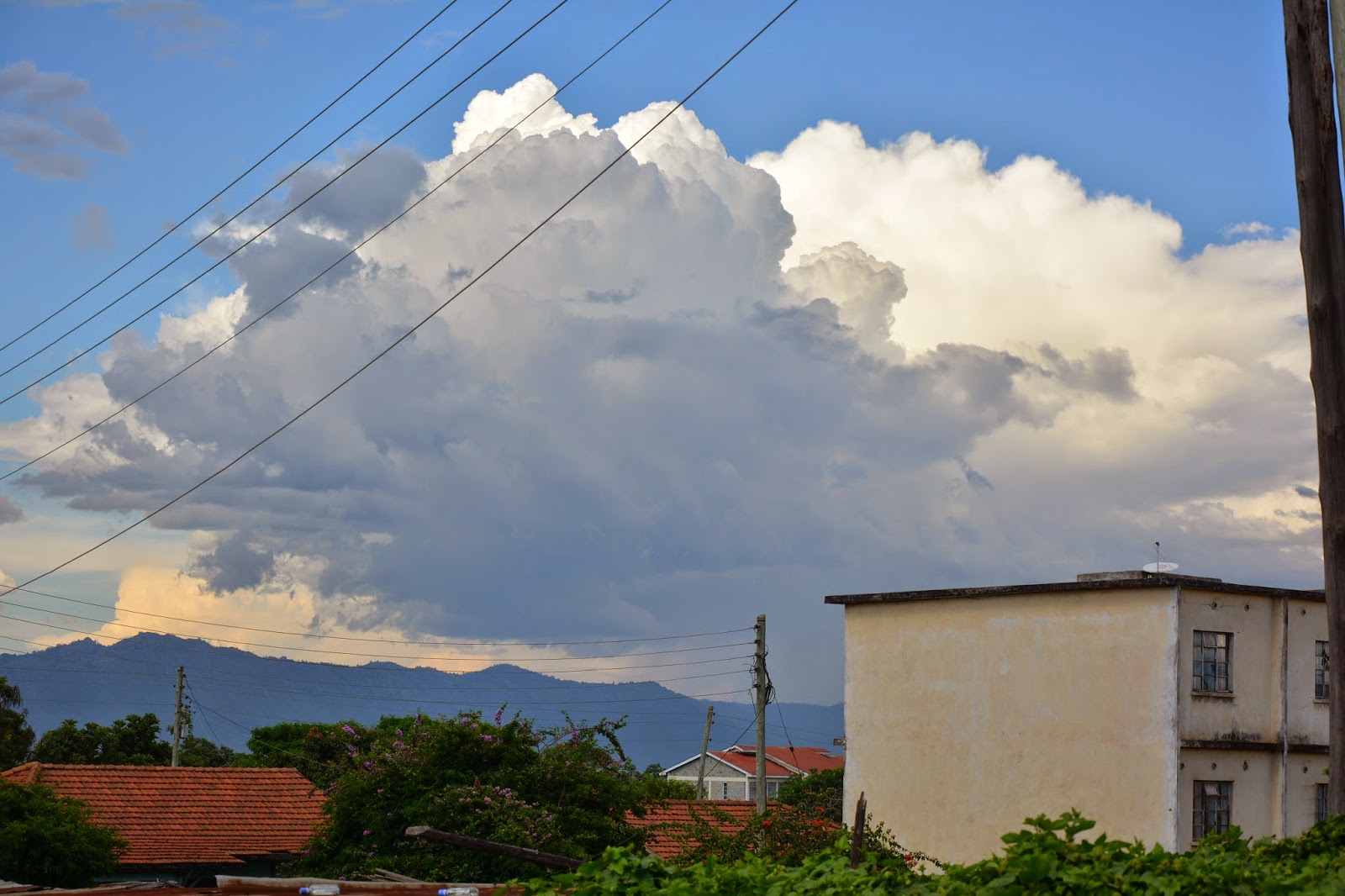 I took the time to take some photos of the sights as we drove.  I sometime see some of the most amazing things.  Some of the shots are pretty self explanatory on their own.  Others need brief description to grasp the gravity of the situation.  Regardless, driving in Kisumu (or anywhere else in Kenya) can be a harrowing experience.  I've mixed in some other pictures that just struck me for one reason or another.  We decided to head back into town today because the president will be there on Tuesday and we didn't want the extra headaches.  It was interesting to see how they were "sprucing up" the city.  The curbs were being painted with black and white squares.  They were hanging Kenyan flags on every corner; despite many of them being tattered and worn.  Pictures of the president along with his cabinet members were hung from light posts.  You'd never know that these people can't stand him.

The roads were in horrible shape.  We passed dump trucks dropping piles of crushed stone and the

movers that were smoothing them out... and the vehicles that were getting stuck in it.  It was like watching an accident happen.  They're spreading stone that's about 1 1/2 feet thick on a hard dirt surface, then they're directing cars to drive over it.  Who can't see the potential problem with that?  Apparently they can't. 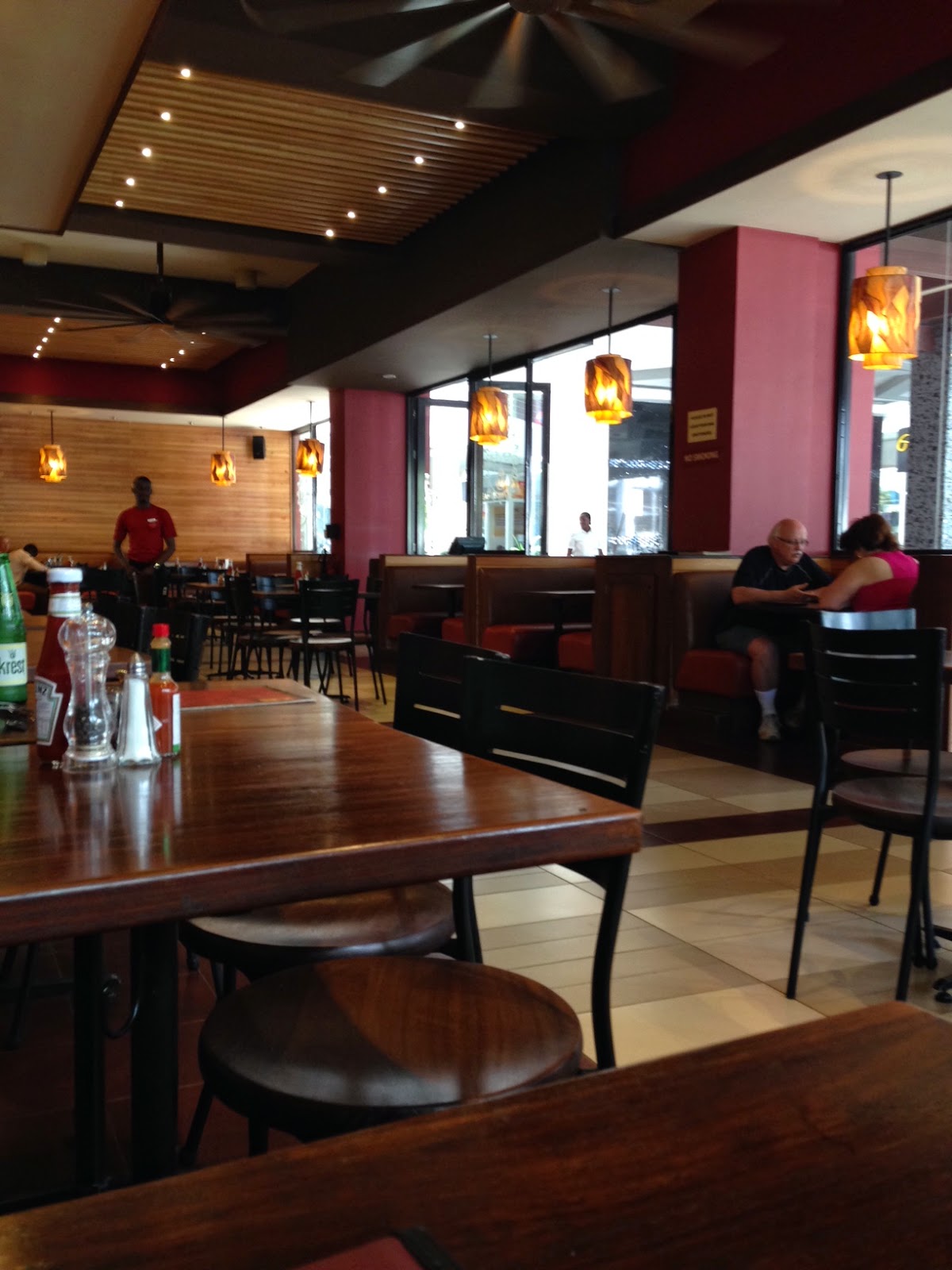 Today we decided to try a new restaurant called Java (on a recommendation by our driver Elly).  It's located in a relatively new mall in Kisumu called the West End.  It was quite nice.  Job and I had smoothies, but only because the waitress suggested them instead of the shakes we originally ordered.  We should have stuck with our first instinct, but they were pretty good.  A shake
definitely would have been better.  Elly had chicken, Job tried the pork loin and I had the beef (although it was called "flank steak" on the menu, I think I could have argued that point).  The food was very good.  The salad that came with it was phenomenal!  It's seems like forever since I had one and the simple combination of lettuce, cucumbers and tomatoes was perfect.  They also had free wifi which was a nice surprise.  With our bellies full, we headed back to the Masai Market to pick up something that I forgot yesterday.  I couldn't help to grab a few other things as we walked by the shops.  I did manage to grab one of the "toilet angels" I spoke about yesterday.  It's a terrible name, but it describes it pretty accurately (although it's really a candle holder). The skies to the north were really getting dark, so we started our journey back.  I made a bet with Job (1,000ksh) that he'd fall asleep on the ride back.  I thought it'd be easy money since he has fallen asleep every time.  He told the driver he'd give him 200KSH if he helped him stay awake.  I offered him 500 to help him fall asleep.  He had a wonderful laugh, and that last line really got him going.  His phone went of twice during the trip, and that was enough to perk up Job.  I lost. 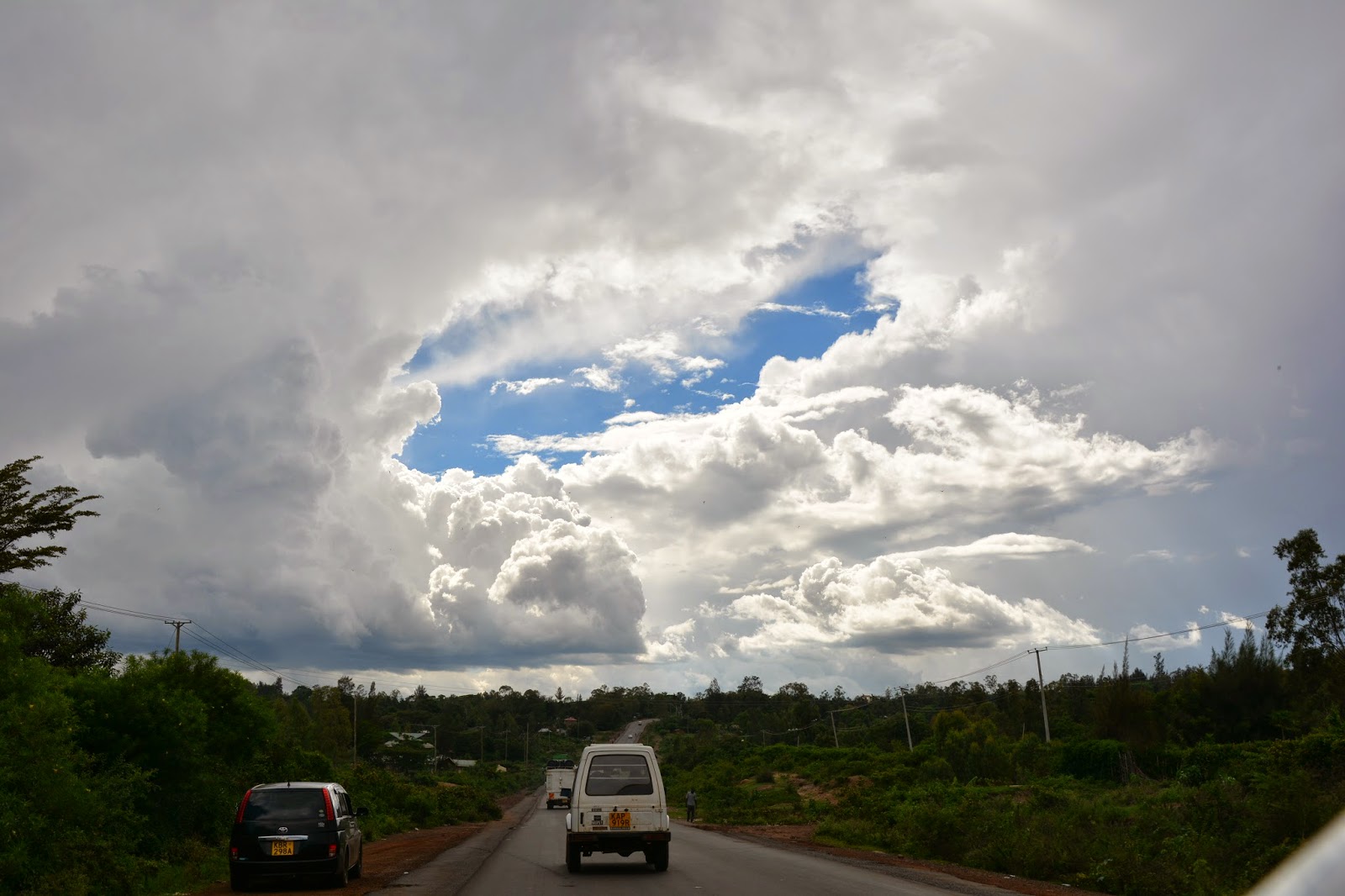 More construction on the way back with more sights to see.  The clouds were actually getting worse as we watched this large patch of clear blue sky slowly close up.

We were dry when we got back, but the rains started promptly at 6.  It's been on again, off again ever since.
I'm sure we'll start the whole process again tomorrow.  This time, however, they'll be no driver... we're walking!
Posted by Adam Jablonski at 1:35 AM