My first full day in Kenya followed a very active first evening in Kenya, and I wasn’t the active one.  Before turning in for the night the stars had disappeared.  Well, they didn’t disappear, but they were hiding behind some very thick clouds.  Those clouds decided to introduce themselves at about 11:30pm.  The rain was incredibly heavy and it lasted quite awhile.  You may have never had the pleasure of sleeping underneath a tin roof (let alone one without insulation) during a rain storm.  Here’s an easy way to simulate the experience.  Hold a cookie sheet over your head and have someone dump buckets of pennies over you.  Seriously.  Unlike the penny scenario, the rain eventually became some melodic OR I was so exhausted that I was hallucinating and eventually passed out from exhaustion.  I prefer to think the former, but the latter is more likely.
I woke up after about 7 hours of sleep and I was thankful for every minute.  I flipped on the switch to begin the warm of the heating coils for a shower and “tidied” up my room.  20 minutes later I hopped in the shower (sans shower curtain) and turned on the water.  Nothing.  It was perfectly logical for me to repeat the process of closing and opening the knob several more times expecting something to change.  Alas, it did not.  I got dressed and was about to head back outside when Job knocked at the door.  I greeted him and he asked, “So, how eeze yoo-ah moaning so fah?”  I showed him the shower.  He too repeated the same process of closing and opening the spicket… clearly that means I’m not crazy.  One of the workers came down to turn the  OTHER spicket just outside my door that permitted the water to flow freely through the shower head.  With all the rain we had I was sure there would be water, and now I know it was merely being prevented from escaping.  Problem solved.  Thank you Jesus.
We ate hard boiled eggs and bread along with a cup of tea while we talked about the days events.  The eggs must have just come out of the water because the shells burnt my fingers.  Job had no problem with them, but mine sat there lifeless until the cooled off some more.  It was already 81 degrees so it took a little while.  No matter, they were delicious.
The only thing on the schedule for today was to visit Sam’s home.  This was the custom of the Luo.  The week(s) before the burial, everyone comes to the home of the deceased following a very specific set of rules.  We were no different.

As we walked toward Sam’s home, Job filled me in on what we were going to encounter.  We had very few interruptions as we walked.  Two are worth noting.

A couple of Job’s friends saw us walk by so they hurried to catch up with us.  They spoke very little English so Job translated. “They wahnt to hahve a peek-cha weeth yoo.”  “Shoo-ah,” I said (I have a tendency to speak English like a Kenyan… it makes it much easier for them to understand me).  They stood on either side of me; each of them about a foot away.  I’m not sure how many white people they see, but it didn’t appear that they’ve ever been this close to one in the wild.  I stretched out my arms and pulled them both against me at the same time.  They immediately began to laugh as Job snapped off some photos.  I may have pulled a little to hard because they almost collapsed into me.  They continued to walk with us for a bit until we stopped to say hi to some friends from Mbaka Oromo.  We then came upon a woman who was working.  She also asked for a picture.  Job told her that we would do it on the way back.  “I weel task heem weeth that.”  She responded.  Job replied,  “Why don’t you make some tea for us, too.”  (Here comes the haymaker) “You don’t drink tea, you eat dogs.”  WHAT?!  Where did that come from?  A rather lively discussion between Job and I followed.  Apparently, Kenyans have their own set of stereotypes based on a person’s nationality.  Despite my height, I was placed into one.  Job said, “She must think all you mzungo look alike.”   I told him it was his fault and he was ruining my reputation (Job has been known to harass Karen about hunting our dog Sox when he comes to visit).
Time passed quickly and we found ourselves at Sam’s.

His entire family was there.  His sister Anne, all his sons and daughters, as well as some frineds were there, all helping prepare the grounds for the ceremony.  His first (that was news to me) and his second wife had returned as well.  The property had changed significantly since I was here in January.  Two small homes were being finished where part of his cornfield used to be.  I saw our friend Caleb among the workers.  As custom dictates, we said nothing as we followed the foot path to Sam’s house.  We entered past Sam's drums that were sitting on the ground outside the doorway.  Job said a short prayer before we sat down on a couch in front of a wooden table.  This was the same seat I took in January, only Sam sat ironing his robes for church.  I can still hear his laughter bouncing off the walls. On another table sat Sam's drumsticks.

Once seated, people slowly entered to greet us.  “Pole sana,” (So very sorry) was the most common phrase.  Everyone that entered was quiet but smiling.  His son Alex (who is probably around 20) was the only one who was visibly shaken.  I put my arm around him as I held his hand  and gave him a firm hug.  He shook hands with Job and Caleb (who followed us in and sat) and then went back outside.  I haven’t seen him in several years because of boarding school.  He looks like a smaller version of Sam.  He’s grown into a man… a very strong frame with broad shoulders and sharp facial features.

After about an hour, we went outside where there were several small groups sitting in resin chairs talking (presumably about Sam).  We were no different.  The stories continued until a couple of men joined us.  The stories were only interrupted by unscheduled moments of silence between them.  It was then that you could hear the leaves rustling above our heads in the avocado trees.  A hen wandered by with 5 or 6 chicks in tow, peeping quite loudly.  The occasional “moo” from cows is always present, too.  Surprisingly, the children from the primary school next door weren’t making a sound.  Frankly, I didn’t even know they were there until Job told me later in the day. Eventually, someone else would begin talking.  Then those stories changed again when John Oguso and Dan Otieno arrived.  Dan is Samuel’s older brother and John is Sam’s neighbor and very dear friend.  They both hugged me and said, “hello.”  Dan was walking with a cane and a mild limp – he had fractured his ankle last month and his cast was removed last week. It’s not really accurate for me to say, “he was walking with a cane…”  The cane spent most of the time in the air next to him.  The limp was the only reason you knew the can was his, otherwise you would have thought he was bringing it for someone else. 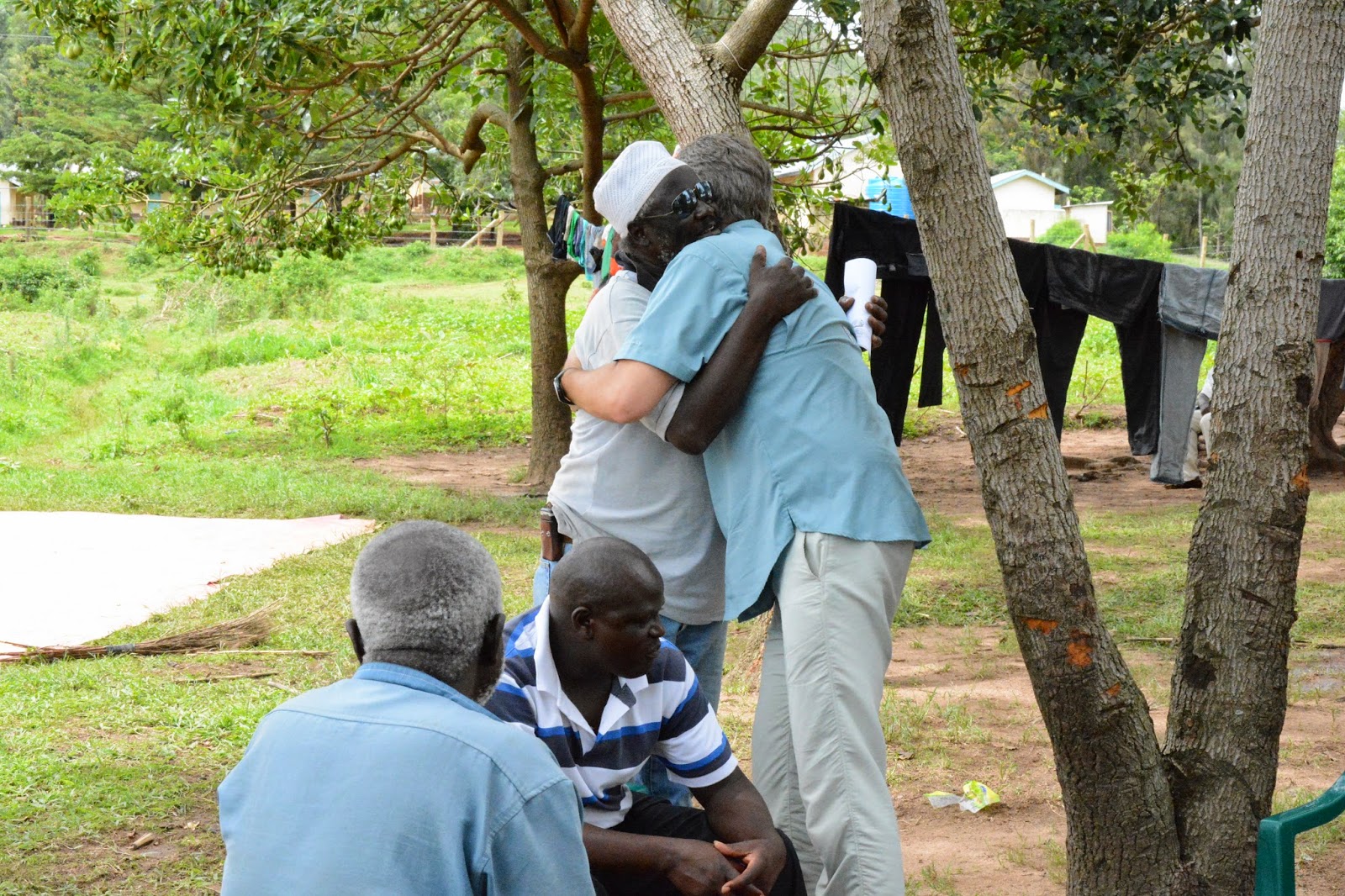 He brought the funeral programs with him and handed me one.  I was deeply moved by it’s contents.  I won’t provide you with those details until after the service on Saturday… I know that some attendees will be reading this.
They asked about each family member by name, Andrea, Kevin, Katie and Karen.  I inquired about their families, too, and they’re all doing well.  It is very rare to hear something to the contrary.  It’s part of the reason why we love these people so much.  I don’t know if the word “complaining” exists in Kiswahili or Doluo.  Dan was kind enough to give us a ride back to the hotel.  It wasn’t much above 85, but it felt warmer.  It was a late lunch – close to 3 o’clock.  We brought an avocado from one of Sam’s trees and I ate it with my chicken.  Sam was known for enormous avocados.   This one was quite small – Job said it was due to the lack of sun (it’s been raining a lot for the last several weeks).  Regardless of the size, it was delicious. 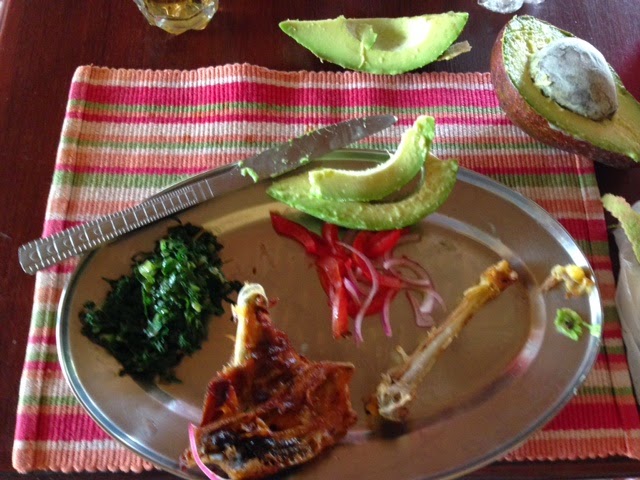 Caleb and Job left soon after eating.
Job returned a few hours later, but neither of us ate.  We talked about the procession tomorrow as the bring Sam from the mortuary to his home.  We will meet them at the church and accompany them to his house.  We’ll spend the entire day there with his family and friends before heading back at around 7pm.  Then, at the service on Saturday, it will be another full day.  We’ve said “goodbye” to friends here during two of our trips here.  That’s two too many.