Today was a good day.  It was a fun one.

It started out with a meeting with Hilda Ayieko.  She's the District Public Health Officer that oversees the area where the clinic is.  Her office is just beyond Rock City.  That's a national park that shows off some of the larger stones that seem to be "planted" in this area.  I've never been to the park because you can see the stones all over this area.
Hilda hasn't seen the clinic since it's been finished, so fortunately I had plans with me.  She and Jim made some changes that weren't reflected in the plans but she was very happy that the project is continuing.  We talked about placement of the living quarters (BTW, we need two, not one), latrines, a septic tank, cisterns, gutters, and an incinerator.  It sounds like a lot, and it is, but the only complicated structure is the house.  Everything else is quite simple.  The only thing I haven't mentioned... "You will need a placenta pit."  I should have known better than to ask, "I know what a placenta is, but what is a placenta pit?"  In my defense, I thought she orginally said, "pitch" not "pit."  Kevin was kind enough to correct me, and later said, "I had no idea there would be so many placentas."  Again, he's a funny kid.  They need a 15' deep hole.  I don't need to tell you the rest.  A friendly reminder that we're in a very rural part of a 3rd world country.

Hilda then introduced us to her boss Monica who was a very charismatic lady.  She took us over to their maternity ward (their offices are in a hospital), to show us what we should have in ours.  As we entered the ward, I turned to Kevin, "You ok?"  He said, "Yeah, as long as nobody's naked!"  Thanksfully, nobody was.  Here's a picture of Hilda with Kevin... I didn't realize that her eyes were closed, and I've been trying not to take so many pictures.  This was one of those times when I should have taken two. 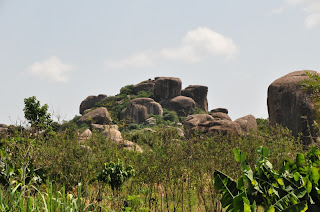 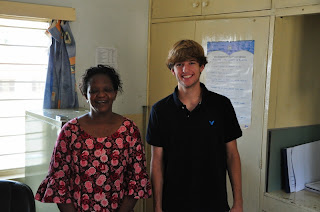 We returned to our car and headed for Huma Girls Secondary School.  I called Merab (the Headmistress) to make sure it was ok.  "You are welcome!" was the response, and 20 minutes later we were greeted with smiles and hand shakes.  Unlike Hilda, Merab greeted us more traditionally.  You shake hands and tap temples.  That's the easiest way to describe it.  While you are holding hands, you first touch each other's temples on their left side, then their right.  Her deputy was with her, so it was much the same with her.  I can't remember her name as I type, but hopefully it will come to me.  She is not as vibrant as Mareb, and is often shy when she smiles, and she smiles a lot.

We talked about building a dormitory for the girls.  The quotation she handed me was high, but before she turned it over, she said, "This is too high.  We can make changes to get it to 3 million ksh."  That's about $35,000 for a dormitory.  Not a bad deal.  The best part is, all I really need to do is wire the money.  She is VERY sharp, and her PTA is very active and supportive of the school.  The get girls all the way from Mombasa (opposite side of the country on the ocean)!  We talked about the dormitory and the girls, and she asked Kevin a lot of questions.  THey have a beautiful flat field that they share with Huma Primary School, and it's perfect for baseball.  Merab's team rocks!  I don't think they've ever lost a game.  Merab asked Kevin if he will come back  to play, "Oh, no.  I don't play baseball."  Merab immediately said, "Only Karen plays?" She then said, "Please tell her and the rest of you're family that they are always welcome here."  Here are some pics of Mareb (she's on the left), Kevin, and the deputy. 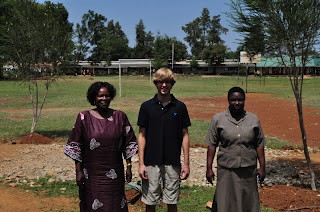 We then went on a tour of the school.  Merab explained what each of the buildings was used for, and Kevin listened intently and asked questions as we walked.  We showed them the dormitory that we supplied with a solar panel for electricity.  150 girls, triple bunked in a 36'x60' space.  They were packed in like sardines.  This additional dormitory will give them much needed space.  It is needed for the safety, as well as providing these young women with room to move. Here's the space that the dormitory will occupy. 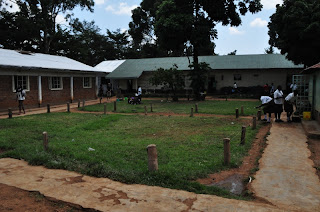 We returned to Merab's office, and continued to talk and tell stories.  We each had a soda while we chatted, and suddenly it was getting late.  The girl that brought in the sodas was wearing a blue Rochester Lady Lions t-shirt.  It made me smile.  We said our goodbyes, and were on our way.

We stopped into Kisumu for lunch and some last minute supplies - batteries for the small fans that we brought to keep our room cool, and a comb.  I was more interested in the comb, actually.  I don't shave when I'm here for fear I'll cut myself, and the water is not clean.  At all.  You don't even want to sing in the shower for risk of getting some in your mouth.  Anyway, my beard's getting to the piont where the hairs start to stab me, so I use a comb to teach them who's the boss.  We actually had pizza for lunch, and I have to say it was quite good.  Another stop at the masai market for some last minute items and we were done.  I probably didn't explain the masai market yet.  Picture a dirt road with little "kiosks" on either side of the road.  They are one after another, and they each have similar items... rosewood carvings, soapstone carvings, native masks, necklaces, earings, artwork... it's really pretty neat to see.  The one catch, however, is that inside each of these little huts are 1 or 2 people that do everything in their power to get you to come into their shop.  As soon as you touch something, the haggling begins.  And haggle you must!  We went right to Beatrice who has the second "shop" on the left hand side.  She's a fast talker, and looks to be in her 50s.  She sits in this shop all day long.  She was very fair with her prices before, and today turned out to be the same.  We picked out a bunch of small soapstone carvings and she charged us the equivalent of $1 for each of them.  You can buy the same ones in the Nairobi airport for $6.  We parted the shop and headed for the car when some additional things caught my eye in another shop.  Kevin got in the car (vincent was waiting for us), I dropped off my backpack and went back to the shop on the end.  I picked up another 4 items.  Yes, I haggled.  Quite well, if I do say so myself.

Now we're sitting in our room under out mosquito nets talking about how the day went.  We've packed (for the most part) so that we won't have to do much tomorrow night.  We start walking at 6:30 to beat the heat.  We'll meet with the Mbaka Oromo committee, play baseball (int he 95 degree sun) and then wakl the 5 miles back to Maseno.  Kevin's hoping to do what he did last time - hit the ball over the classrooms so that all he has to do is walk around the bases.  I'll let you know how that turns out tomorrow.

We head home on Saturday.  Looking forward to seeing Andrea and Karen.  I miss 'em tons.

Just hung up with karen.  She and Ann went to see harry potter.  She makes me smile.  They both do.