The day started out earlier… we were out the door at 7:30. Our driver was a little late, so we sat out front and watched traffic go by for 10 minutes, talking about the day ahead. There was a strong breeze accompanying thick ominous clouds. Kevin was actually wearing a sweatshirt, and for the first time ever – I had a jacket on. Who would have thought that 74 degrees would feel this cold?

We drove to Layla Station to meet up with headmaster William Kabbis. He, too, was running on Kenyan time, so we were delayed another 15 minutes while we exchanged stories. He’s been ill since our last visit… ulcers, malaria and pneumonia all in the span of 5 months. I hurried them (yes, his wife Priscilla was there) along, and exited his home to find that Vincent’s car battery had died. It took another 10 minutes to find another car battery for a jump. And yes, it was just a battery. They didn’t have cables at first. The plan was to rest a tire iron across the positive ends, and a metal rod across the negative. Kevin took a giant step backwards as we watched this disaster unfold. Thankfully, someone emerged from another home with wires. Although they didn’t appear to be heavy enough to do the job, they did. One person had to hold the ends tightly against the heads of the batteries, but it worked… and nobody was injured.

We made it to Chulembo at 8:30. The bus was supposed to pick up the choir at 8, but it ws nowhere in sight. Smiles fell across everyone’s faces when they saw us in the back seat. When Kevin emerged from the vehicle, applause broke out! It was wonderful to watch. We walked up and greeted the 76 students as they waited shivering in the cold wind. It was a typical elementary school scene… boys on one side, girls on the other, but keep in mind that some of the students are in their late teens. Duties at home often prevent them from going to school. This is much more prevalent among the girls, but boys fall victim to it as well. It would be another hour and a half before we continued on to the school. Kevin played with the boys while we waited. The girls would watch him until he raised his gaze their way, then they would giggle and turn away. I don’t think he had a clue. The local butcher shop got a delivery of meat, so that was a learning experience for him. A motorcycle pulled up with an icebox on the back (minus the ice). It was bungee chorded closed with 4 cow legs (hooves and all) under the chord atop the box. The butcher emerged, removed the legs, opened the box, and began removing a slaughtered cow. He hung the pieces on a hook in large locker so that patrons could see what they were buying. No window on the box, and no refrigeration. I asked him how long it would take before all the meat was sold… usually not more than two days. Usually! Yikes. Kevin stopped watching when he began weighing the cow’s innards. I won’t post that picture. 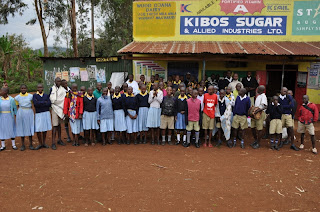 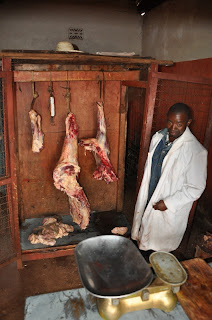 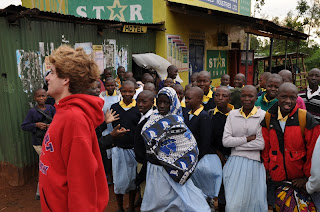 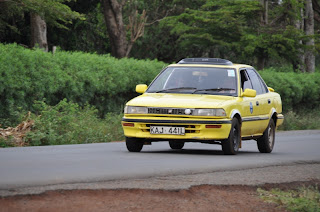 Despite the bus not arriving yet, we really needed to get things done at the school so we headed out. Despite exams ending last week, and most teachers going to Nakuru with the choir, there were still over 200 students there. No classes, but there they were in their uniforms playing with each other. We emerged from the car and greeted the remaining teachers while William called the students for assembly. William spoke of our return trip before asking me to speak. I wasn’t aware that Kevin was snapping pictures while I talked. It probably helped that he was busy, and didn’t give him an opportunity to think that he might have to say a few words, too. He dodged that bullet. 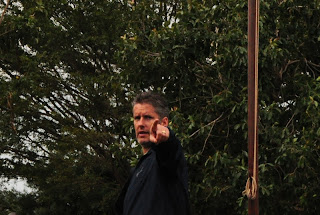 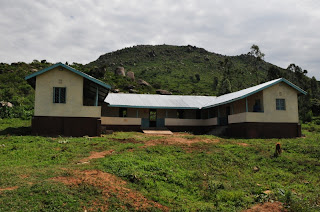 The chairman of the school board, Lawrence, arrived and he joined us as we walked to the clinic. Kevin and I photographed and cataloged the rooms so that we would have that information when we went to see Hilda Ayieko, the regional Health Minister, later in the week. We then inspected the building top to bottom. I showed Kevin the difference between a good foundation crack and a bad one, and we proceeded to go through each of the 16 rooms carefully. We then went outside and inspected the foundation for signs of erosion. We decided that 2 cisterns should be place at the ends of the building, and gutters installed to catch the rainfall and prevent further damage to the soil against the outer walls. After we finished, we stopped my Jim’s monument to say “hello.” The once flowered wreaths were reduced to dry dark petals. I could tell that additional things were brought to the site, but these are poor people, and flowers are not easy to come by. I removed the dead leaves and petals and slapped the monument on the shoulder as if it were Jim’s. Emotions snuck up on me quickly, so we continued back to the administration office in silence.

Here's a picture of Kevin between John (left) and Lawrence (right) 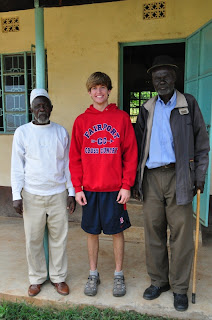 Once there, we returned to talk about the clinic and scheduled a Clinic Committee meeting for Friday. William’s predecessor, John Ogongo, arrived and he and Lawrence began an engaging conversation about his community service. It then turned into questions about college, courses of study and government “support.” That led to questions about assistance on this side, and thus began the history lesson. It started with Jomo Kenyatta (Kenya’s first president) and carried on straight through to the current regime. It was quite interesting, actually. Once we finished our scalding chai, we went back out to play with the children and visit with some families. One in particular was a very poor family. The grandmother was raising 6 grandchildren and caring for her mentally ill husband. We brought the two younger girls (Susan and Emmah) and the youngest boy (Danton) presents from Andrea and Karen. The sun had returned to the sky, and the temperature had risen to 90. We removed our jackets and sweatshirts before walking to their house. Susan was sitting outside on the steps of her classroom. I took her hand and asked her to take me to see her sister. She held it loosely as we walked. Susan is always more guarded with her smiles, but the other two were beaming when we arrived. We handed them their gifts, and nothing could stop the smiles. Sadly, when I took off my jacket, I had left my camera in the car. Their grandmother informed me that the girls wanted to sing a song for us. It was beautiful. Susan did most of the singing while Emmah mouthed the words. She mentioned Karen and Andrea by name as she swayed back and forth to the rhythm of the song. Her soft voice hung in the air. After many thanks from both sides, we went back to the car, grabbed the cameras and returned to find the girls already dressed in their new outfits and Danton playing with his ball and the watercolors. I snapped some quick photos of everyone. Susan would smile, but as soon as I grabbed the camera she would stop and shy away. I managed to get some of her anyway. They’re both adorable. 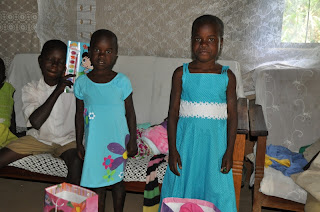 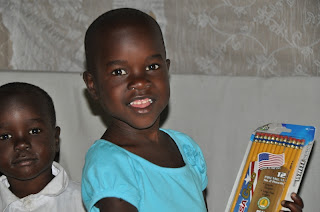 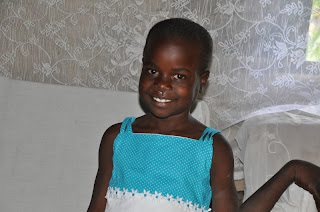 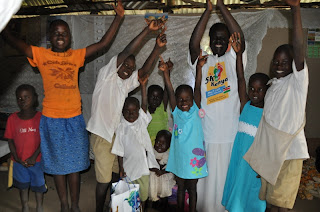 We then stopped at Samuel’s for a quick lesson in Kenyan agriculture. Kevin marveled at the size of his avocados, and his corn stalks were at least 9 feet high. The corn itself was the size of my forearm. Samuel’s a great farmer… I’ve never seen crops like his. 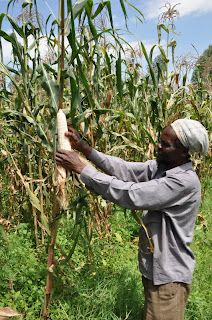 We then set off for Kisumu for a kuku (chicken) lunch with Vincent and our friend Fina. We had a great conversation reminiscing about our times with Jim, our families, and what we’ve been doing for the past 5 months. The chicken was delicious, and it made it hard to stay awake during the ride home. Before that, though, and after we dropped Fina off at work, I took Kevin back to the Kibuye Market. It usually less crowded on weekdays, and wanted to show him what it looked like. Thankfully it wasn’t jammed with people… we walked leisurely as I pointed out all the different shops and items for sale. We bought three oranges and a carpenter tried to sell us a stool on the way out. Kevin said he understood how intimidating that place could be if it were packed.
This is two pictures of the market. 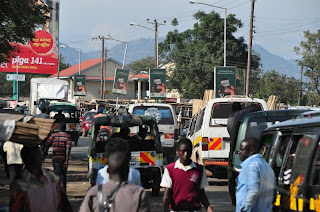 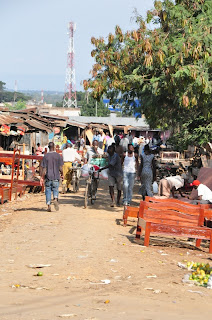 Back in the car, and we headed home. We passed by the new airport that they continue to build. Already 1 year later than they expected and not even close to being finished. It’s the Kenyan version of the “Big Dig” in Boston. The shoulders of the road were busy with people walking, or working. One of the hardest jobs that I see are the guys pictured here. They make little stones out of big stones. All day long, they take a rock the size of a watermelon and break it into stones the size of strawberries… while sitting on a hot rock under a 90 degree sun. All this for about 200 ksh per day (the equivalent of $2.50). There’s no minimum wage here.  And nothing says, "Third world poverty" like a cell tower in the skyline! 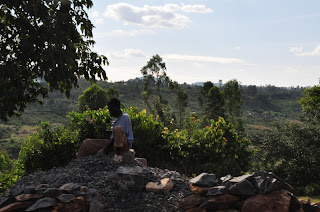 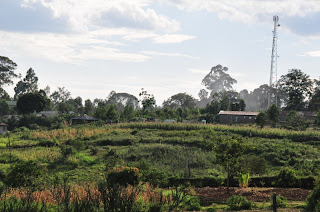 We got back to our room and Kevin immediately wanted to hop on facebook to check in on friends. I changed into shorts and sat on the bed patiently waiting for the computer. Once in my hands, I hopped on Skype and managed to talk to Andrea and Karen in Toledo. It was great to see and hear them. After that conversation, I started this blog entry. I’ve fallen asleep 4 times, with the heat coming off the computer waking me. I’ve been trying to upload pictures, and some have gone smoothly, others were problematic, but at least it will give you a taste of what we see.

Tomorrow it’s off to Nakur to see Springs of Hope orphanage and the choir sing in the national competition.

PS Before I forget, for those of you who wish to see our lavish lifestyle, here's a picture of our room, and next to it is the critter for the day... the only other resident at the guest house so far! Kevin caught this guy outside trying to leave without paying his bill... and he had his twin brother with him. 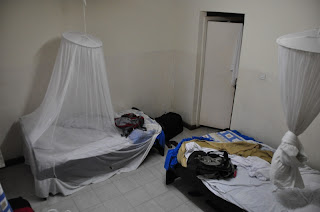 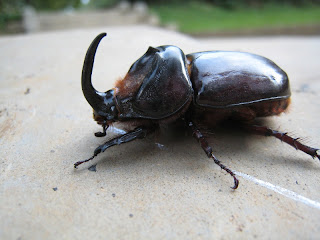