We got maybe 300 yards into the Maseno University campus before we saw Benson - a former student at MBO, now attending tailoring classes in Sereba - the town across the street.  He asked us to walk him to class, so we did.  He refers to it as "college" and I'm not sure if that's what he was told when he enrolled, and/or they refer to any specialty schooling as "college."  No matter, he was glad for the company and asked about our family as we walked.  He beamed with pride as we entered the non-descript tailor shop with his two wzungo friends from America.  3 women sat in front and one man in back.  We greeted them all... even Kevin has gotten comfortable enough to say "Habari."  We stayed for only a few minutes to talk to his mwalimu (teacher), encouraged him to work hard, and returned to the path.  Benson has several disabilities working against him, but he always has managed to persevere.  His hope is that one day he will become a tailor.  I told him I'd like him to make me a shirt when he's ready.  He smiled as we disappeared from sight.

Back on the path again, we encountered Mr. Washington, owner of the local hardware store.  We've known him for 6 years, and he's always been fair in dealing with us.  He was happy to see me, and glad to meet Kevin.  We stepped into his shop and I introduced Kevin to Katherine... one of Mr. Washington's 4 wives.  We talked for a bit, then back to the path.  Again. 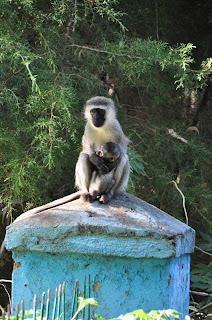 The remainder of the trip was uninterupted.  Much like my walks with Jim, Kevin and I talked the entire way.  Most of it was about the events since we arrived in Kenya.  We takled about Kiswahili, the children from the orphanage in Nakuru, and Vincent, our driver.  We talked about how we were spending our remaining days in Kenya, and we talked about the weather.  It was close to 10:30 now, and the sun was rising quickly.

We arrived at MBO soon after, and stopped to see Momma Helen.  We came with sweets for her - cadbury chocolates.  She was delighted.  She showed me the corn that she had grown with the 500ksh Andrea gave her in February.  She wanted us to, "Thank her for me, and tell her I did not waste the money, look!"  The corn covered a 10sq ft area, and was piled 2 feet high.  Not bad for a woman in her late 60's.

We coninued on to the school.  Exams were last week, so the courtyard was empty.  There was nobody in sight, except for Samuel, busy working in his "office."  He was cutting down the cornstalks after having harvested all the corn.  He worked in long pants and a short sleeved shirt.  No shoes.  He swung his panga (machete) at the stalks as he walked through the field.  He cleared a 100sq ft area in no time.  Did I mention it was already 90 degrees?

We went to the steps of the administration block, and gather our thoughts.  Kevin and I inspected each of the classrooms noting any damage or badly worn spots in need of repair.  There was a lot to write.  We took notes on each room, and photographed them as well.  One of the students came by and was watching us from a distance.  We called him over... Kevin recognized him as one of the boys that climbed the hill with them in February.  He remembered Keving too.  His little sister joined him later, and Kevin gave each of them some hard candy.  Their smiles spoke volumes.  They each opened one piece and immediately began enjoying it. 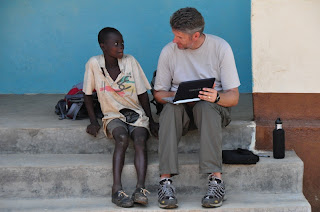 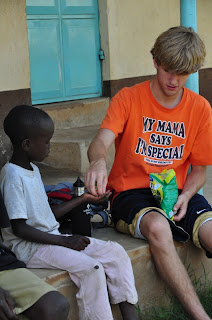 We moved up to the clinic again and took some notes on the rain-eroded areas, and plotted a solution.  Kevin like the idea of sisterns and was ready with thoughts on where they could be placed so that they wouldn't detract from the beauty of the clinic itself.  We headed back down to the school, and sat in the shade eating our peanut butter sandwiches (I had jelly on mine). 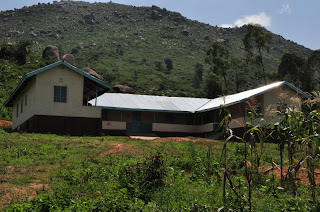 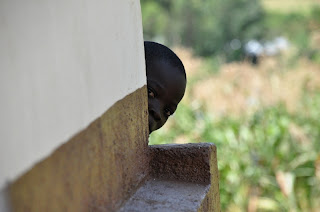 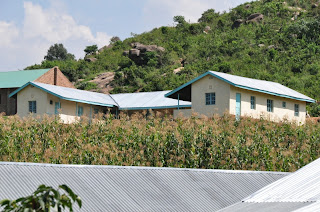 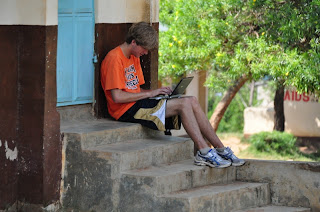 We returned to Samuel who stopped working as we approached.  When I left him in February, I asked him to keep an eye on things.  He always was part of any construction being done at the school, and never asked to be paid, so I know he would be able to tell me if something wasn't right.


We talked for over an hour, and the conversation was very enlightening.  He told me some things that I suspected, but there were some surprizes.  I was greatful for the trust I had put in him.  He walked us out, and returned to his cornfield as we began our walk back.

The sun was still beating down on us as we walked.  Despite the later hour, it was still 95 degrees.  I asked Kevin to look at the thermometer attached to my pack, and a heavy sigh said it all.  We walked briskly, and most of the way was uphill... it took us closer to two hours to walk the 5 miles, and we were exhausted when we arrived back at the guest house. 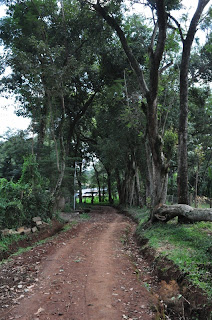 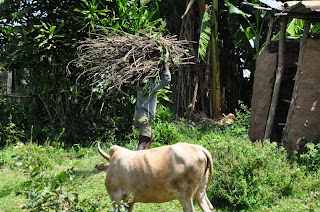 A quick nap, then we went to the Green Park Restaruant in Sereba across the street.  the food is always good, and ridiculously inexpensive.  The owner knows us and again, we've never been cheated there.  Two plates of fried kuku (chicken) rice and skumawiki (kale) along with two sodas cost 420ksh... the equivalent of $5.

We walked back to the guest again under very cloudy skies.  It began sprinkling lightly while we were eating, and we could see lightening in the distance as the clouds built up against the hills.

Nakuru has all the makings of a great place to work next, and the Bail's have a wonderful organization in place that we could help.  It's closer to Nairobi and Masai Mara, and the nurses would certainly enjoy working with the children.  Seems like a no brainer to me.  We'll see.  Let's see how far we get with the clinic.  One meeting at a time, and the first will be with Hilda tomorrow morning. 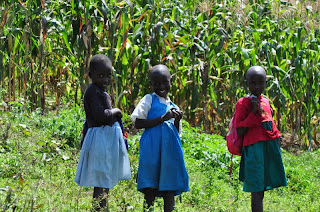 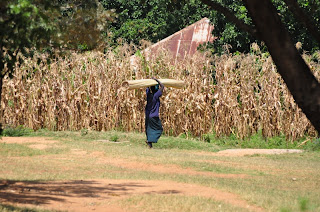