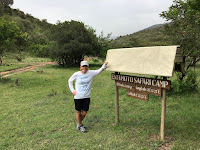 We decided to give up on the rhino, which meant that we could sleep in.  We did.  Breakfast this morning was at 9.  This morning we were headed back to the Masai village to distribute the pillowcase dresses, followed by a trip to the hippo pool at the Mara River.  It’s quite a drive, but something that youdefinitely don’t want to miss while you’re here.  Although hippos are the main attraction, you’ll usually see crocodiles, too, as well as some birds that stay closer to the river.  Unfortunately, if you want to see flamingos you have to go to Nakuru.  Don’t ask me why.  I have no idea.  I’ll try to remember to ask Isaac the next time I talk to him. 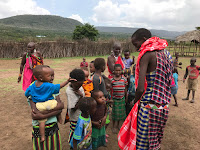 The village was close by, so after breakfast we packed up the duffel with dresses and headed out.  Because we only had about 40 pillowcase dresses, the plan was to go inside one of the fenced areas and distribute them slowly so that we didn’t draw a crowd.  More importantly, Andrea was really concerned about having to turn away children if we ran out.  We stopped in front of the fences gate and didn’t make it 5 paces until we were deluged.  Children seemed to be pouring in from everywhere.  I don’t know if word got out or they just sensed it, but it was like breaking a piñata in a elementary school courtyard.  They were spilling in from all directions and to say it was overwhelming would be an understatement.
Fortunately, some of the Masai men that were nearby came to assist and we were very grateful when all was said and done.  They helped thin the heard significantly once we showed them the size of the dresses.  This made a huge impact on the size of the crowd.  Next, I’ll tell you that it’s not easy to distinguish boys from girls when everyone shaves their head.  Fortunately, again, some of the younger ones weren’t wearing pants.  I think it’s a given that if you’re under 3’ tall and you’re not wearing pants, you’re a boy.  That might be universal.  Anyway, we finally started removing dresses and holding them up to the children to check the length.  Once we were sure they would go past the knee, we had a winner!  The dress was slipped on and every time the head popped through the top, there was a smile on the face.  This was all being done close to the truck, so Andrea wisely took a higher position inside to survey everything that was happening.  We asked them all to stay so we could take a picture afterward, but many of them took off running.  I think this might be why Andrea searched for a birds’s-eye view.  She spotted some mothers quickly removing the dress and sending the child back for another.  This wasn’t rampant – she only spotted two, but that was enough to keep a watchful eye on them.   Interestingly enough, I’m only just now realizing that those were the only mother’s I remember seeing, and I didn’t even see them – Andrea did.  I’m not sure that signified anything other than they were probably working; preforming chores or selling handmade jewelry and the Sekenani Gte (that’s the entrance to the park that ever visitor passes through).  For them, it’s like shooting fish in a barrel.  A truck full of foreigners pulls up and stops while pasports are checked, and the women surround the vehicle’s open windows holding bracelets and chains and earrings and necklaces.  Once you touch one, they have you… at that point, the hook is set.  We’ll get back to that later, though. 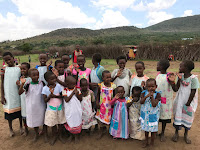 Karen, Sam and I continued to hand out the dresses until they were all gone.  Andrea continued to keep one eye on the surroundings and one eye on the girls.  It was easy for her to point out a girl that a dress would fit.  The men watched her and would bring the girl closer to the front for fitting.  She stuck the landing every time.  I don’t want it to sound like we picked girls for dresses and didn’t pick others.  It was always a manageable crowd that consisted of very young boys (who stood around like boys do) and slightly older girls who wouldn’t fit in the dresses.  That fact did not prevent them from blocking the path for their younger counterparts.  All the same, we managed.  It took all of us to do so.
There was a small group of girls still milling around.  I’m guessing they may have been related (in one way or another) to the men that were helping.  We snapped some quick photos and thanked them for their help.  They seemed genuinely grateful for our visit and the gifts we gave their daughters.  The young girls ran alongside the truck as we pulled away.  All-the-while cheering and waving.  Another great start to the day. 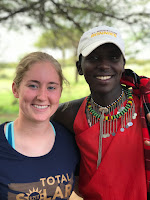 Off to the hippo pool!  First, though, we had to pass through the aforementioned, “Sekenani Gate.”  We stopped the vehicle to get out and were immediately recognized by John (Karen’s suitor/husband from before).  We stopped and said,”hi” and chatted a bit.  Andrea had an entirely different experience.  5 women rapidly approached her with their “jewelery for sale” hanging off every inch of them.  I thought this was a well planned attack, but I was wrong.  They extended their hands and smiled saying, “Nalatuesha!”  They just came to say hello to the “rain bringer.”  If I didn’t mention it before, it’s been raining on-and-off since we arrived.  We had packages of underwear for little girls left over from the village so we gave them to the women to distribute.  Moma Maria was among them so we knew they would go where they were needed.  The lines in her face spoke kindness and honesty.  Her smile; compassion.  She’s one of those women we will always remember.

Once again, we were back in the truck.  It was a long ride, and I think this was where Isaac let Karen get back behind the wheel to drive.  I may be mixing this up with a different day and if that’s the case, I have nobody to blame but myself.  This blog is already 7 days late, and I’m still

trying to get back to Eastern Standard Time.  We spotted more animals that we were able to get closer to than on previous days.  We saw large packs of hyenas and a few large elephant herds.  Even the giraffe’s gave us some new poses.  When we finally reached the hippo pond, we found that all of them were in the water.  As if on cue, Sam once again called out the name of the animal she spotted, “Hippos!” with a wide smile.  That’s been the norm, and it never get’s old.  Her first sighting of an animal gets us all excited, but Sam’s is childlike.  That’s not a dig in any way.  It was just such genuine joy and “childlike” is the best way to explain it.  That joy makes everyone smile, too.  It makes you wish you could bottle it and give it to people who need it.

We got out to watch them from above the embankment.  Climbing down would have been a very poor choice.  These animals are very territorial and once your shoe hit the beach you’d have an enormous bull coming out of the water like an orca at sea world jumping to catch a fish held high on a string.  I’ve seen it happen first hand (the hippo scenario, not the killer whale) and it’s as terrifying as it is awesome.  They made their baritone gurgling noises while they rose and sank in the water.  There wasn’t a lot of action, so Isaac decided to up the ante.  He lowered himself onto a fallen tree that Andrea, and Sam were standing on, then grabbed onto a large bush that was growing on the bank.  He began to make the noise of a male lion while shaking the life out of the bush.  Mission accomplished.  The hippose rose much higher out of the water, often climbing on top of one another as the huddled closer, with mouths wide open showing their tusks.  Isaac is like the Rich Little of Masai Mara.  All of you under 30 may have to google him, but suffice to say that he can mimic any animal on the mara… including birds.  He will explain the species, then the sound, then what it means.  It’s very impressive… as demonstrated by the hippos.  Sergio gave it the college try, but the hippos weren’t impressed with it.  They just went about their business.  Karen pointed out something that we’d never seen.  The hippose that were deep in the water would not break the water with their heads to get a breath of air.  Instead, many would just barely poke their nostrils above the surface.  It looked like a couple tricycle tires floating in the water before they once again submerged.
We headed downstream, but it was too cool to spot any crocs.  They prefer to sun themselves, and although it doesn’t make any sense, they had retreated into a cave… where there’s no sun… and it’s probably cooler… in the water.  I’ll chalk that one up to tiny brains.

We started to head back and admire the landscape as we did so.  The animals were everywhere and usually in mixed heards.  We’d occasionally stop when we saw a herd of gazelles all staring in the same direction.  That usually means that there’s a predator coming from the direction their gaze falls.  There’s no telling how far away they are, though, so after a quick look through the binoculars, Isaac would let us know whether we should stick around or keep moving.  The few times it happened, we always kept moving. 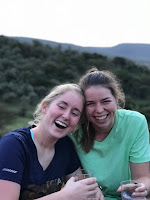 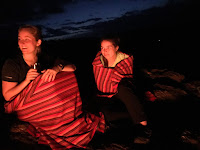 We got back to camp before dark and then managed to get to Entumoto’s version of “Pride Rock” before the sun set.  Isaac calls them sundowners.   This enormous rock (yes, it really does look like Pride Rock from the Lion King) is only a few hundred yards from camp and it’s a wonderful spot for drinks, a snack, and a fire.  We hit all three and clowned around for about an hour, telling stories and trying to get some portraits of Zachary and Sam.  Zachary is the young man who has been serving us our meals and drinks every day since we arrived.  He’s an incredibly nice man… and Sam is single.  Andrea and Karen asked if he could join us for the sun-downer and Isaac immediately said, “Shoo-ah!”  We took some wonderful pictures before heading back to camp for dinner. 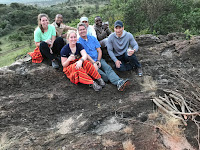 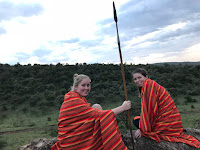 Steak!  Everyone was excited.  Not so much Andrea, because she doesn’t eat much red meat.  I am always the benefactor of that choice, so I split hers with Sergio.  It was delicious.  The group split up with some going to bed and others (myself included) heading for the lounge to type.  My head kept dropping in exhaustion.  The fact that I’m 7 days late with this entry tells you that I accomplished nothing.  Since I’ve been back, I’ve tried on several occasions to publish posts, and sometimes it works, and other times I’ve got to do it all over again.  A friend of ours is going to help redesign our website and help me with a better blog solution.  Sleep awaits, but it won’t wait for long.  Tutaoanana kecho.  Talk to you tomorrow.

Posted by Adam Jablonski at 6:23 PM No comments: