Andrea, Karen, Sergio and I don’t leave until 11:59pm tonight.  Sam leaves at 8pm.  We got up early to make sure that we had plenty of time to do some shopping before we freshen up at the Royale in Karen – that means a 7am departure.  As always, that’s the plan.
We left at 8am.
First stop was the Sekenani Gate.  Immediate recognition – Nalatuesha!  Mama Maria was the first to approach, and three or four women trailed close behind. Each of them was smiling and waving hello as they came forward for a hug.  It was nice to see Maria one more time before heading out.  She was the one who came and sat at Andrea’s side during the meeting.  She is a calming presence among these women and the same followed through to Andrea.  We snapped a couple quick photos of them before turning our cameras to Karen and John.  John was the young Masai that offered 25 cows for Karen.  He had dimples like Karen, as well as a wide smile, but it’s just not happenin’.  Karen and Sam clowned around with him for awhile before Karen gave up her St. Bonaventure baseball cap.  I’ll be sure to check if he’s still wearing it when I return in the spring.
We all headed back to the car and Maria was still wearing her smile as we pulled away.  We were in a different vehicle this time, with a different driver.  Paul was behind the wheel of the big Land Cruiser.  This vehicle will certainly handle the bumps much better than our first foray down the Mara Road.  Having an extra body in the car, however, did not help with the luggage space… though we managed.  Karibu Kenya.
The ride down the Mara Road was  like driving on the Audobon compared to the trip when we arrived.  Paul was quite adept at navigating the larger potholes, and the grooves in the road that loosened your teeth on the way in were virtually nonexistent.  There was one pit stop along the way.  It was at the only curios along the Mara Road, and it was a nice one.  They had some beautiful pieces that I wanted to buy while everyone used the restroom.  I finally got them to agree on a price, so I went out to the car to get some cash.  When I returned to the store, the price had tripled.  I simply turned and walked out making sure that the shop owners could see the cash in my hands as I took larger strides toward the vehicle.  Before I closed the door, they were both next to me with yet another price.  They had come down a bit (not enough to consider), but remained nowhere near the agreed upon price prior to the baitand-switch.  I said, “Ah ah, Tokeni!” as Paul started the car.  “No, Move!”  They did. 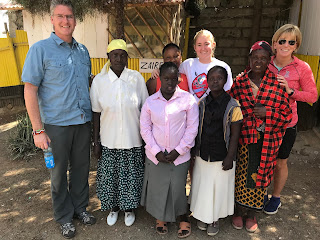 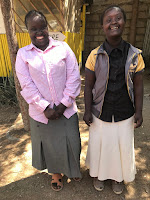 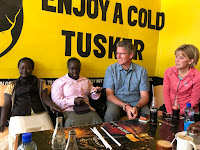 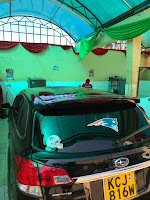 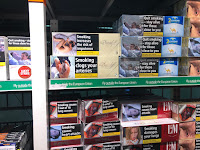 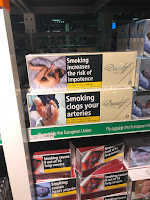 We left a modem and phone with Sam so that she could keep us updated with her whereabouts as we travelled. We caught up with her (at least her messages) in Amsterdam.  Traveling was going well for everyone.   I snapped these two pictures in the gift shop at the airport.  The Dutch believe in "Truth In Advertising."

We sat and had a coffee/chai at Starbucks in the Schlipol Airport while we waited for our next flight.

The bags were already tagged through so all we had to do was drop them at the appropriately marked, “BAG DROP AREA.”  Then through security one more time and the waiting began.  We waited longer than we wanted to but we had no choice.  Flight delays.  We knew we were in trouble when we weren’t called to board 30 minutes before the flight.  I quick peak outside showed us why – no plane.  That’s kind of important.  Karen fell asleep and I was incredibly punchy.  Sergio had his nose in his phone.  Andrea was holding strong.  Don’t know how she does it.  She held Karen’s head in her lap and waited patiently for the plane to arrive.  I went up to see how much longer.  The Delta rep was incredibly helpful.  “It won’t be long.  The plane is in range.”  I’d have felt better if he wasn’t spinning around in his seat as we talked.  I expect that from a 6 year old seated at a bar (yes, unusual scenario but you get my point), not from an adult customer service rep.  “Very informative,” was the only thing I could muster as I walked away.  It would seem that “within range” means “about 20 minutes.”  You know, like “a few” means “3.”
We finally boarded and I’m pretty sure I was asleep before the door closed.  Andrea updated me when I woke up as we landed.  “Yes,” she said, “you were snoring.”  I didn’t care a bit.  Still exhausted, we texted Kevin who was already here in Rochester waiting.  As we passed through the exit, there he was.  There’s something about seeing a loved one when you come off a trip.  It’s especially nice when they greet you inside the airport.  I could have cried.  He hugged his mom first, then Karen.  He gave a firm handshake to Sergio before I was able to drop my bag and give him hug.  We then ventured downstairs and waited for our bags before stepping out into the cold night air.  It felt wonderful!  Thankfully, he drove home.
We’ve been back for quite some time, and I’m sorry that it’s taken so long to post the last day.  I know that you’ve grown accustomed to me typing these daily.  Frankly, so have I.  I’ll blame it on age and my ability to deal with fatigue.  I will continue to try to improve on the timeliness of these posts, as well as posting things that we learn about the ever growing list of projects and friends that we meet along the way.  TTFN.  Tata for now.  Happy New Year, everyone!

Posted by Adam Jablonski at 6:32 AM No comments: