First of all, I'd like to thank everyone that has sent me a note to say that they look forward to reading this blog.  I actually enjoy writing, although yes, it's at the expense of sleep.  I know that my family back home enjoys it, and I'm glad that you do, too.

Now, back to business...

Our plan was to set out by 6:45am to surprise Wendy at home before she left for school.  Last night Dedan (Job kept telling me that his name was Duncan, but it's not) insisted that he make me breakfast this morning, so I told him I would be out front at 6:15.  I got up at 5:45 and it wasn't easy.  It took a ridiculously long time to upload pictures last night, so I didn't finish the blog until after 1am.  I knew he was waiting and I didn't want to disappoint him.  Sure enough, the table was set up with mango juice and chai... for 4!  I was the only one that ate, as the other part of the plan was to stop for something in Kericho... but that didn't happen either.  We loaded our bags into the car at 6:45 and headed for Wendy's.  She quite a distance from Mbaka Oromo, and we could only drive within about 3/4 of a mile.  We walked the rest of the way zig-zaggin between corn fields and banana trees.  When we finally arrived at Wendy's (it was about 7), the surprise was on us.  She left 5 minutes ago.  Her mom went running for her and suggested we meet closer to where we parked the car.
W got back to where John was parked, but no sign of Wendy.  We waited for what seemed like an eternity.  No sign of Wendy.  Then, you could see stalks and tall grass moving when there wasn't any breeze.  She must have sprinted the entire way, because she was huffing and puffing like she just ran a marathon.  There was no way we were going to leave without delivering her presents from Amie and saying "oritii" (goodbye in Luo).  I handed Kevin my camera so that I could take a knee next to her and show her the gifts.  She's got the greatest smile!  This girl is a sweetheart.  She went through the bag, and then I gave her a hug for Amie and one from us.  She dashed back to her home and we got back into the SUV. 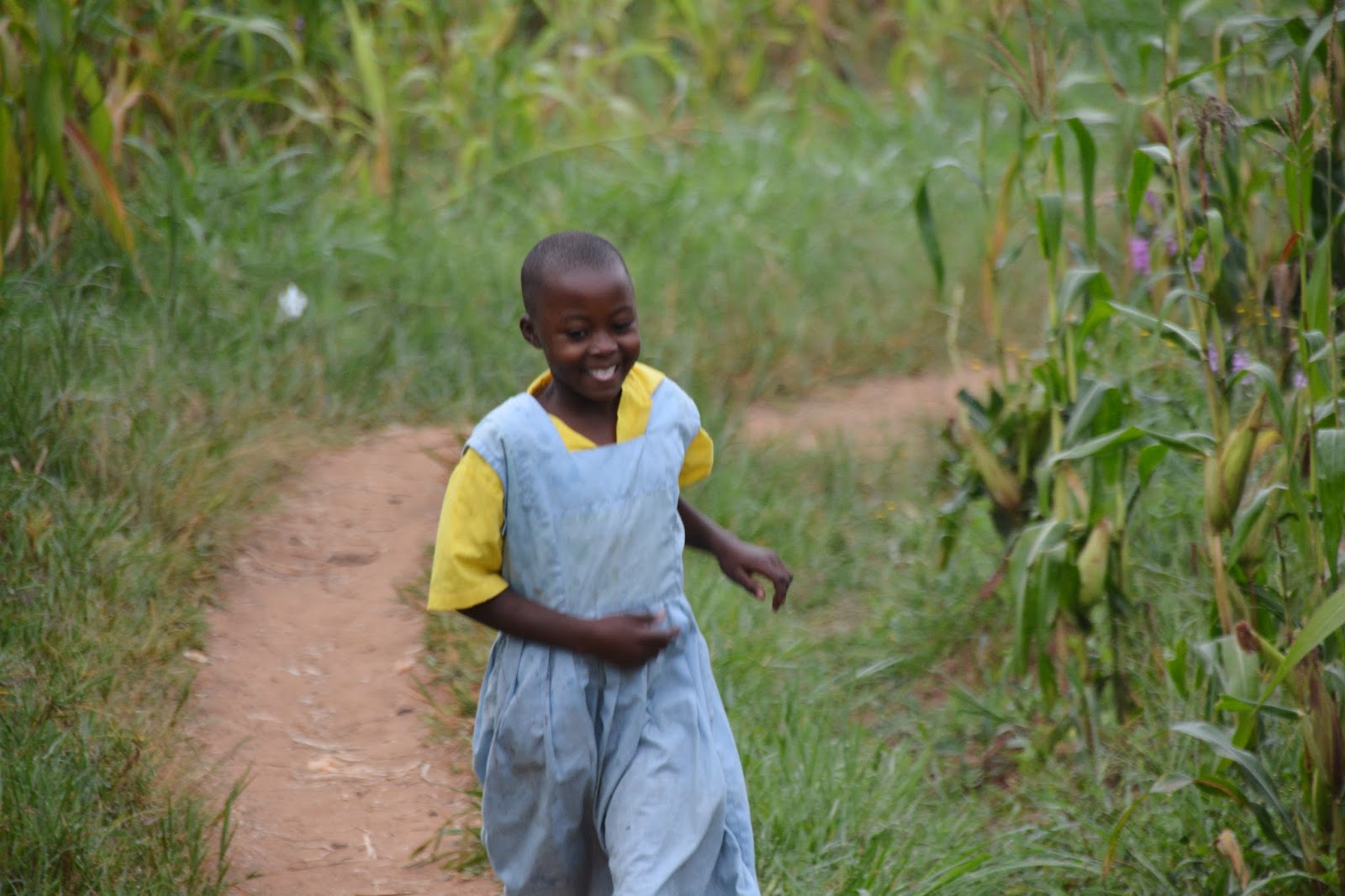 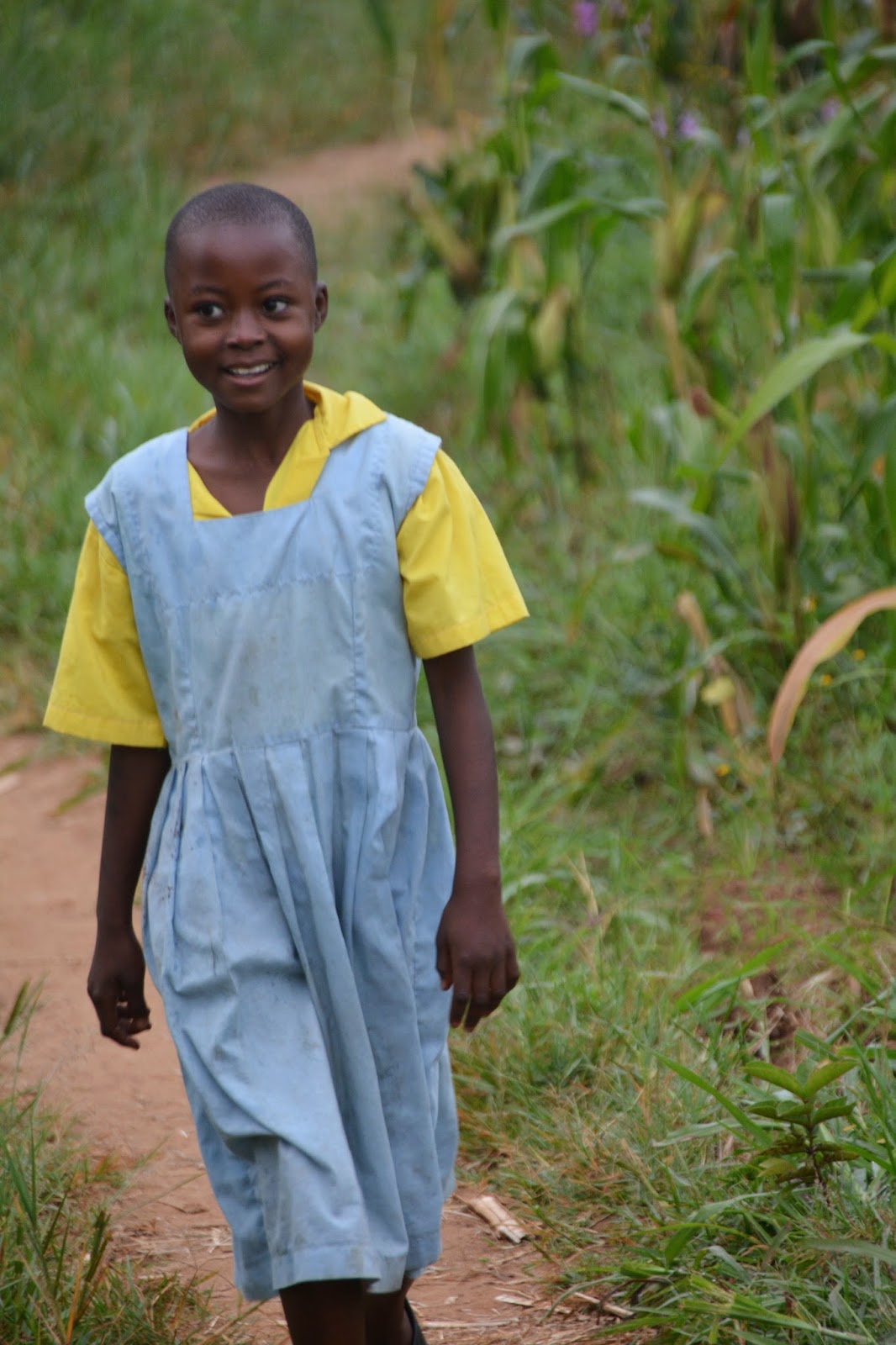 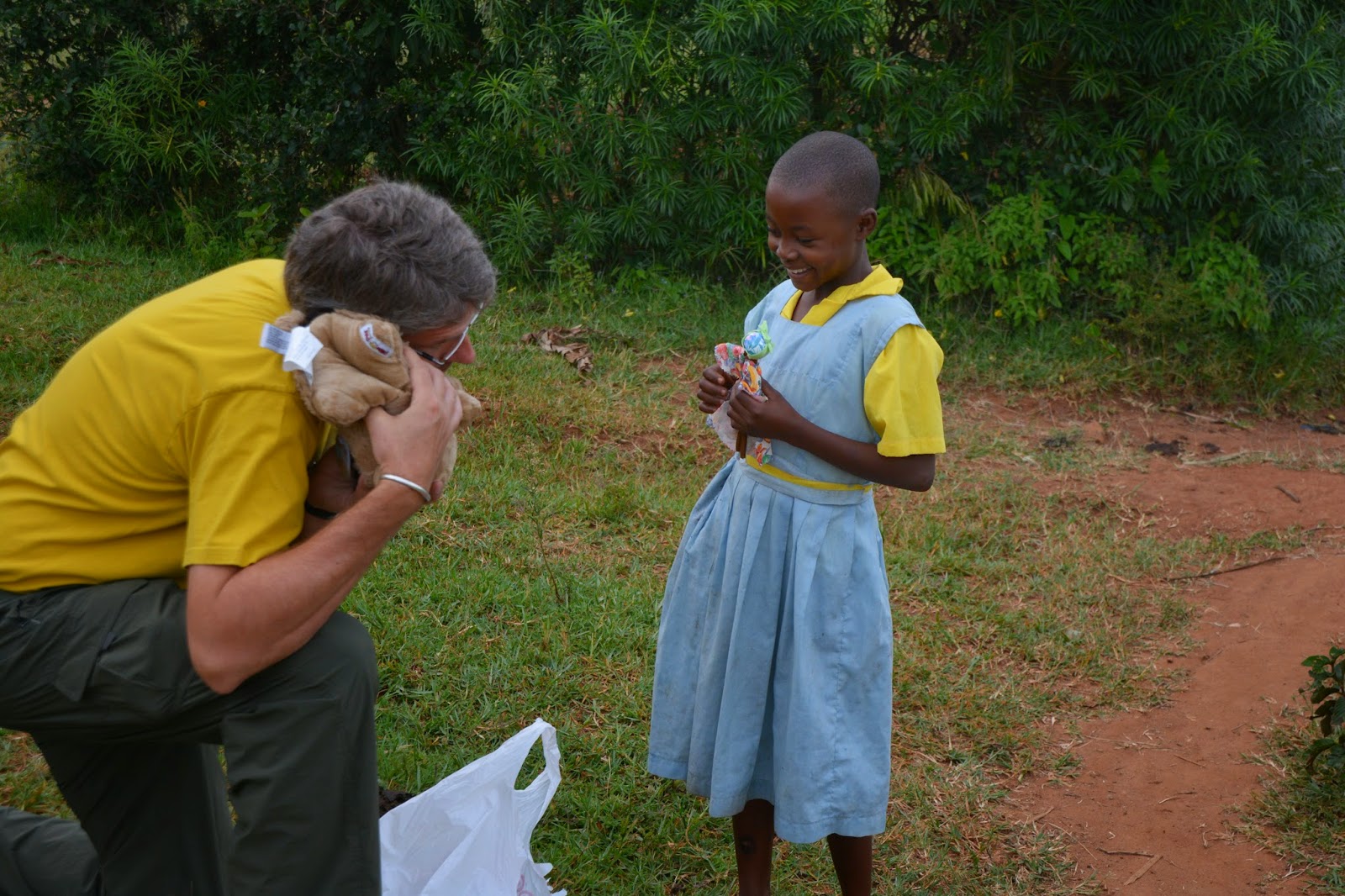 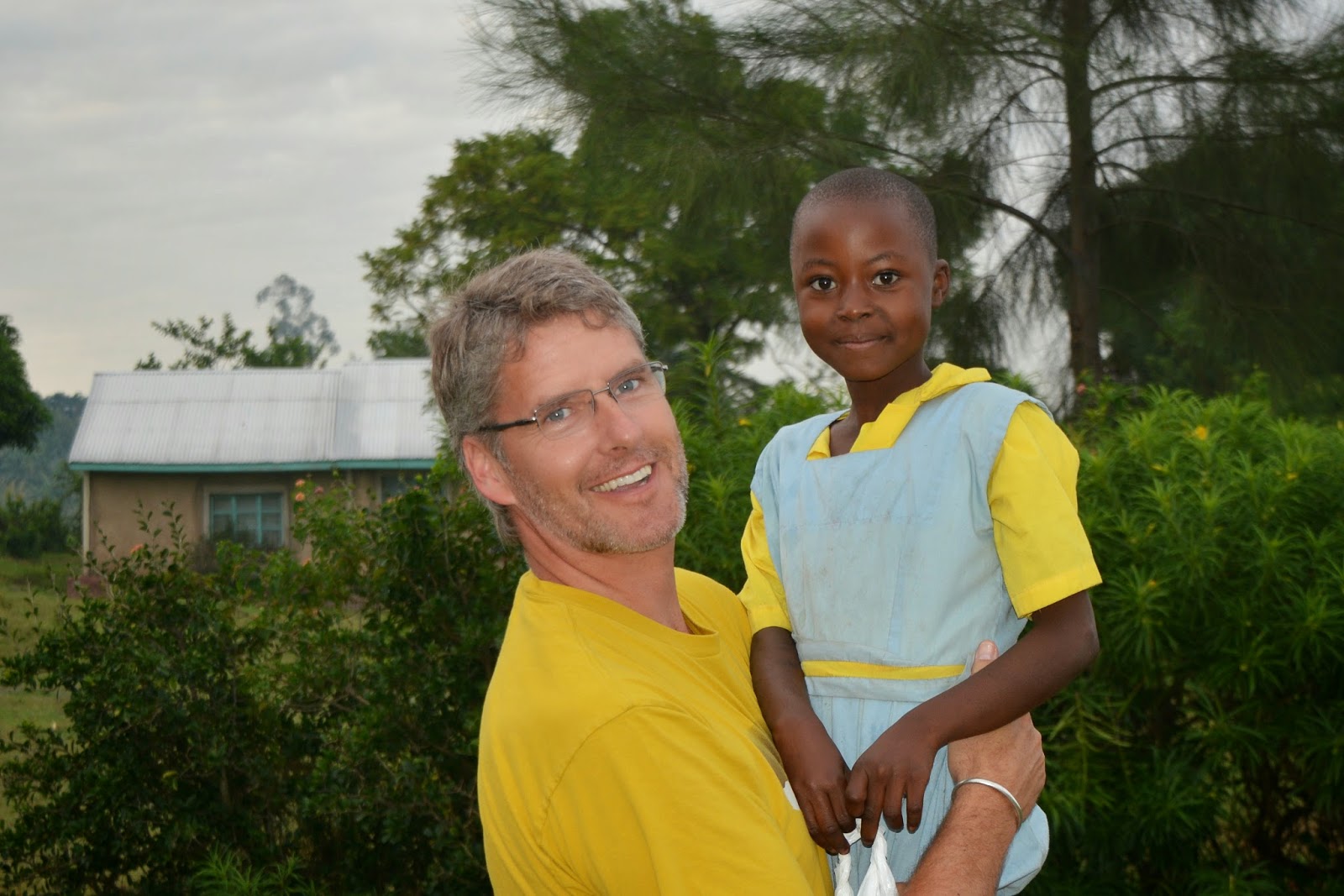 We went to Job's house so that we could drop off some things - it would prevent him from carrying them to Nairobi and back.  They call it a "house" or their "home" but it can be anything from a free standing house to an apartment.  Job's was an apartment, and even more like a bachelor pad.  Actually, he's not really a bachelor anymore, I think he may just be messy.  In his defense, there's a lot to put into a small room.

For those of you playing at home, a tuc tuc is a covered 3 wheeled vehicle that looks like the things they drive around in India.

We were on the road to Nairobi at 7:30am.  Based on projections, we should arrive there by 1:30pm.

The road was pretty good.  While there were some detours (here they say "diversion" or "bypass") we were asphalt most of the way.  We moved quickly, passing slower tankers and trucks, and climbing hills like a pro.  It was nice to be able to see the changing landscape as it passed by.  When we left Nyanza Province and Maseno, the corn was over 6' high in most places and people were in the streets of Kisumu selling bananas.

We eventually came upon Kericho where the brilliant green tea fields went on forever.  The workers were out picking in plants that looked like they were up to their shoulders.
Although I can't remember the town, it was clearly known for potatoes.  They literally lined the streets.

Next was carrots.  It was easy to spot the bags filled with the bright orange vegetable.  The contrasting colors are really a sight to see.  Vibrant orange or green against a pale earth tone makes the items look almost fake... like there in
front of a green screen.  Next came Narok - beautifully large sweeping wheat fields as far as the eye could see, and corn, too, although this corn was already being harvested.

Here's the way it works.  When you come into towns, there is always a series of speed bumps.  Because I think it's illegal to have a good suspension in this country, every vehicle has to come close to a complete stop before climbing over the 6" high hump that stretches across the entire road.  There's usually a series of 3 or 4 in each spot.  The ladies line their wares along the road next to these speed bumps and as soon as you slow down, they are next to the car with the items they are selling in their hands, shouting out prices.  They do it all day long, and as we drove east the climate changed significantly.  It was actually getting cool.  That explains why the corn in Maseno was still growing while the corn in Narok was being harvested.  I was thankful for the cooler breezes, too.  It made the trip much easier.

We made a 20 minute stop in Narok where Job was getting a document for a lawyer that will help with his visa application.  We're heading to the embassy tomorrow morning so that I can tell them that we'll be his sponsor in the US.  I also had the opportunity to meet John's wife and sister, although only briefly.

We were still two hours away, so I broke out the PB&J sandwiches that I made while I was at breakfast.  Andrea got it for us before we left, and because she's a choosy mother, she chose Jiff, reduced fat Jiff.  I wonder if anyone even remembers those commercials... Kevin and Job weren't hungry so it was down to John and I.  The bread I bought when we first arrived was already too hard, and I noticed that the bread they served at breakfast was always soft.  You can't make a PB&J without soft bread.  Dedan gave me 8 pieces so that I could make them.  They tasted so good I had to fight every urge in me to consume another one.  John smiled and said, "Very tasty."  Peanuts (called "ground nuts" here) are everywhere, but you don't see a lot of peanut butter.  In Kenya, jelly is a luxury, and grape jelly is unthinkable.  Damn that was a good sandwich.  I'm staring at the other one that is only 2 feet away.  I'll finish the blog first, then I'll eat it.

This was the only traffic we hit...although we did encounter some baboons shortly after these cows crossed the road.

We made it into Karen close to our schedule... 2:30.  They've done a lot of upgrades since we were here last.  It's a really nice resort in a beautiful town.  Karen is the most affluent Kenyan neighborhood I've ever been in.  On our way to our rooms we passed the swimming pool, the fitness center (with updated equipment) and the children's playground.  We weren't in the main building this time, rather, we were taken to the back of the compound where a series of motel-like rooms were located.  Inside, again, really nice, and yup, hot water.
Kevin and Job went to use the gym while I went into town to an ATM with John.  When I got back, I took some photos of the duo.  Job challenged Kevin again, and as you can see by the picture, he lost again.  This one wasn't fair, though.  They continue to be great friends. I have to remember to send this picture to my friend Steve who works for Victory Brewing (makers of Thunderhead). Tomorrow is legs and arms at 6:30am.  I'm hoping to get the first good night of sleep all week, so I won't be joining them. 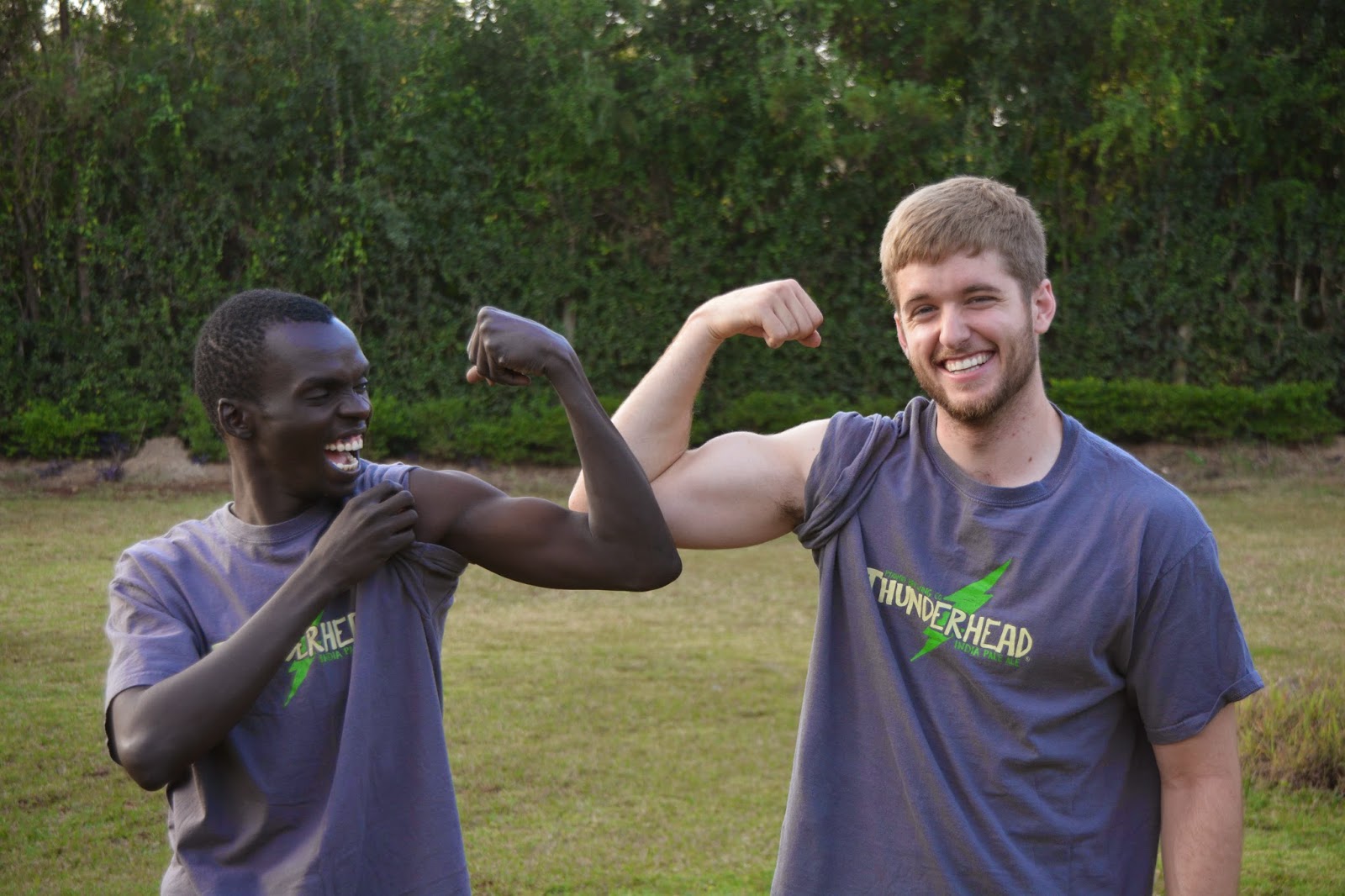 We're waiting for Isaac to join us before we have dinner.  Hopefully he'll be arriving soon.  It's almost 7pm and I'm sure everyone's hungry.
If I don't post another piece tonight, I'll post one before you wake up.  We should be out of the embassy by noon, and that's 4am on the east coast.
See ya!

Katie, I saw your cat through an open door! 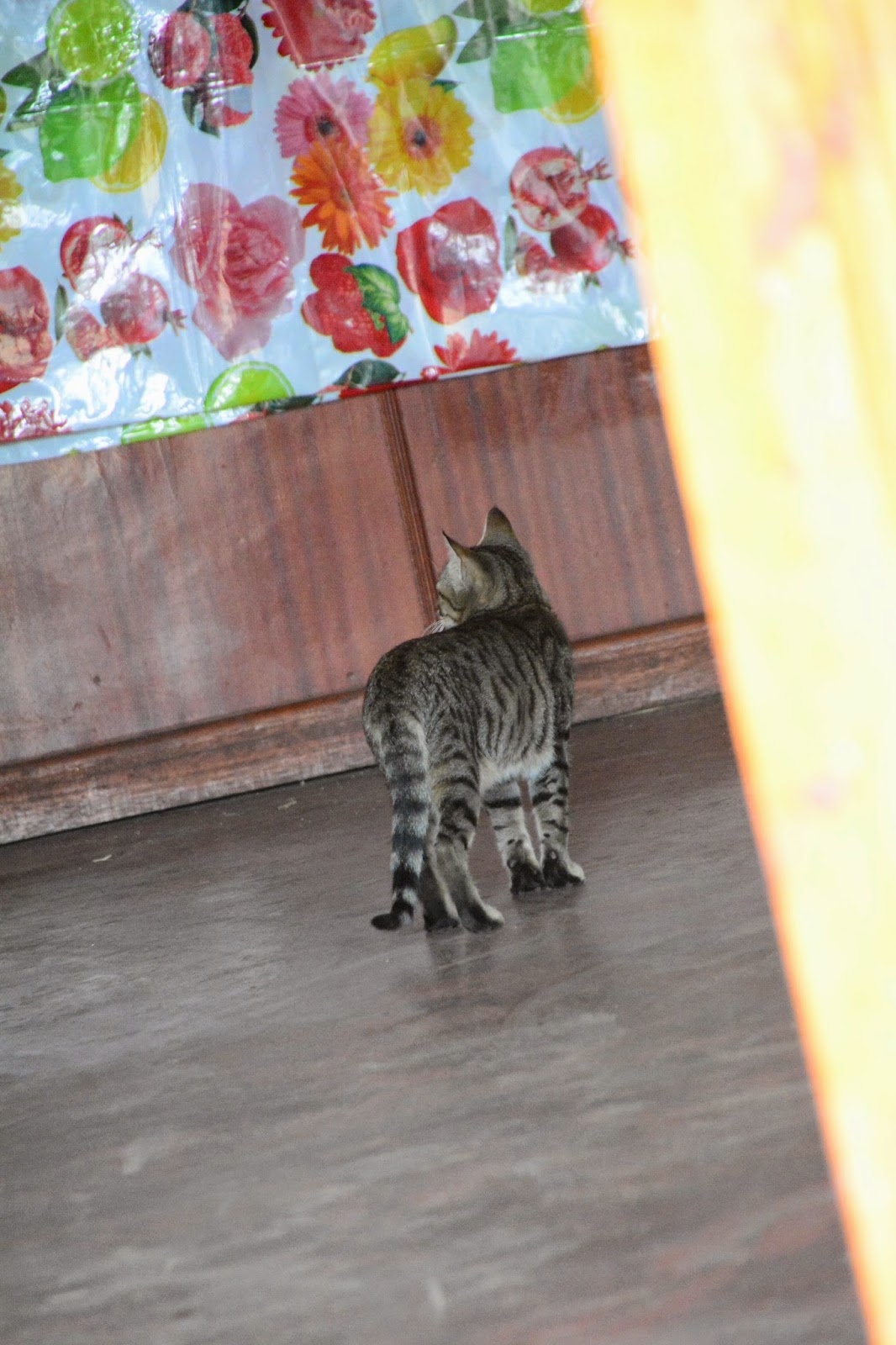 Posted by Adam Jablonski at 7:40 PM