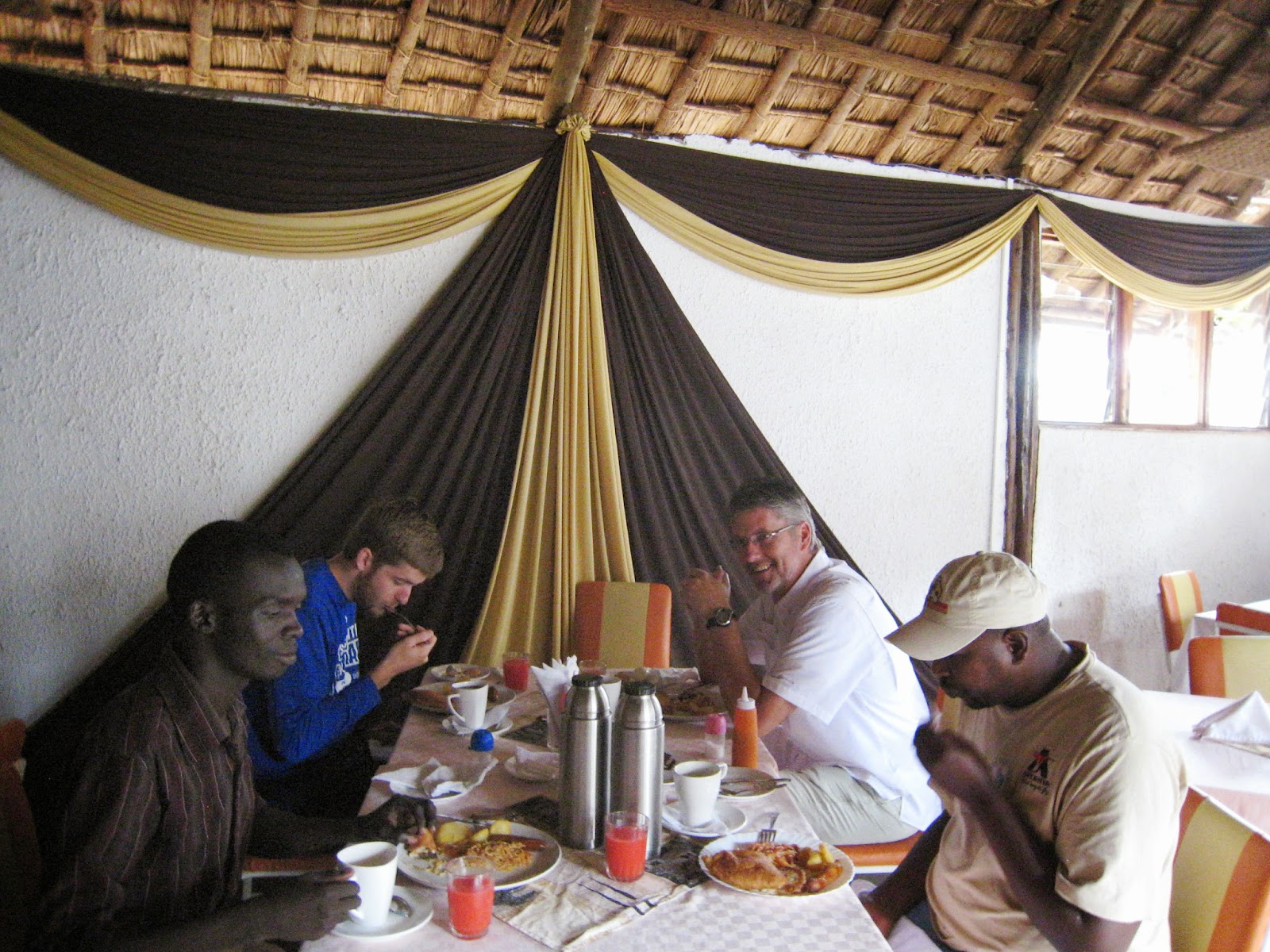 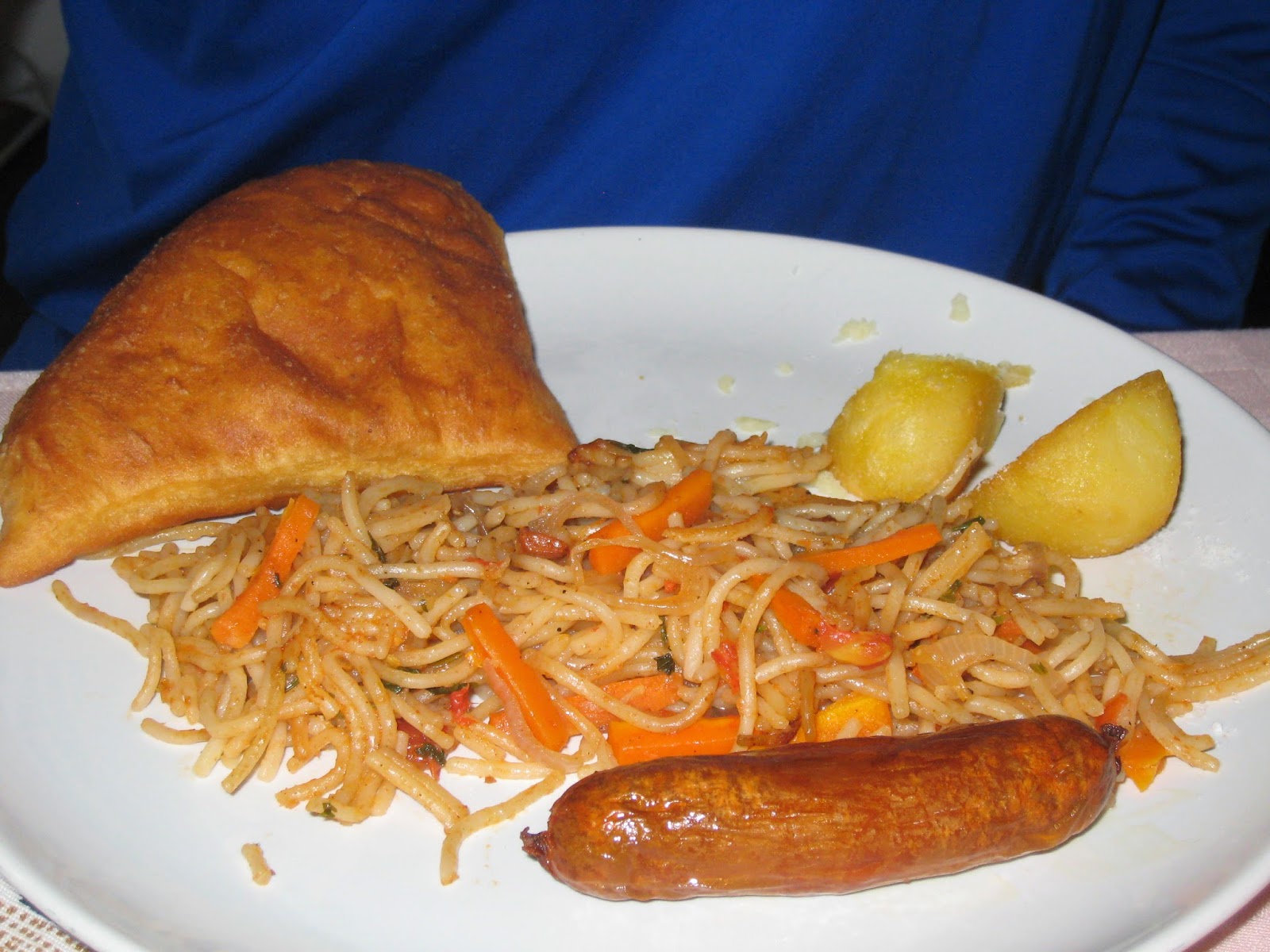 I’m not sure where to begin.  I fell asleep for a little while after posting the last entry.  I probably got another 1 hour under my belt.  Breakfast was being served at 9, so we left our rooms and meandered over to the breakfast are.  I was happy to have something other than a fried egg – the breakfast of choice for anyone in a hotel in Maseno.  Instead, we had potatoes, mandazi (that’s the fried cake), a sausage with the main course (insert drum roll) a carrot and pasta dish.  It was pretty tasty.  The mandazi was made with some kind of spice that more than likely came for India… it just had that taste to it.  The potatoes were cooked perfectly.
We finished breakfast, checked out of the hotel and began our drive to the embassy to help Job get his Visa.  Isaac has already applied and been accepted so I was very disappointed that he was not here to help guide us through the process.  Instead, we were flying somewhat blind.  Isaac said that we wouldn’t need an appointment (mistake #1) and we just needed to ask to speak to whoever was working the visa desk at the time (mistake #2). Again, I’m not a big fan of Nairobi so I usually avoid it.  This was a special circumstance.  According to John, we were only 25km from the embassy and we’d be there in 30 minutes.  Wrong.   The traffic in Nairobi is absolutely insane.  Seriously.  I managed to see my first Kenyan traffic light, which had a timer next to the light so you knew exactly when the light was going to change.  Neat idea. 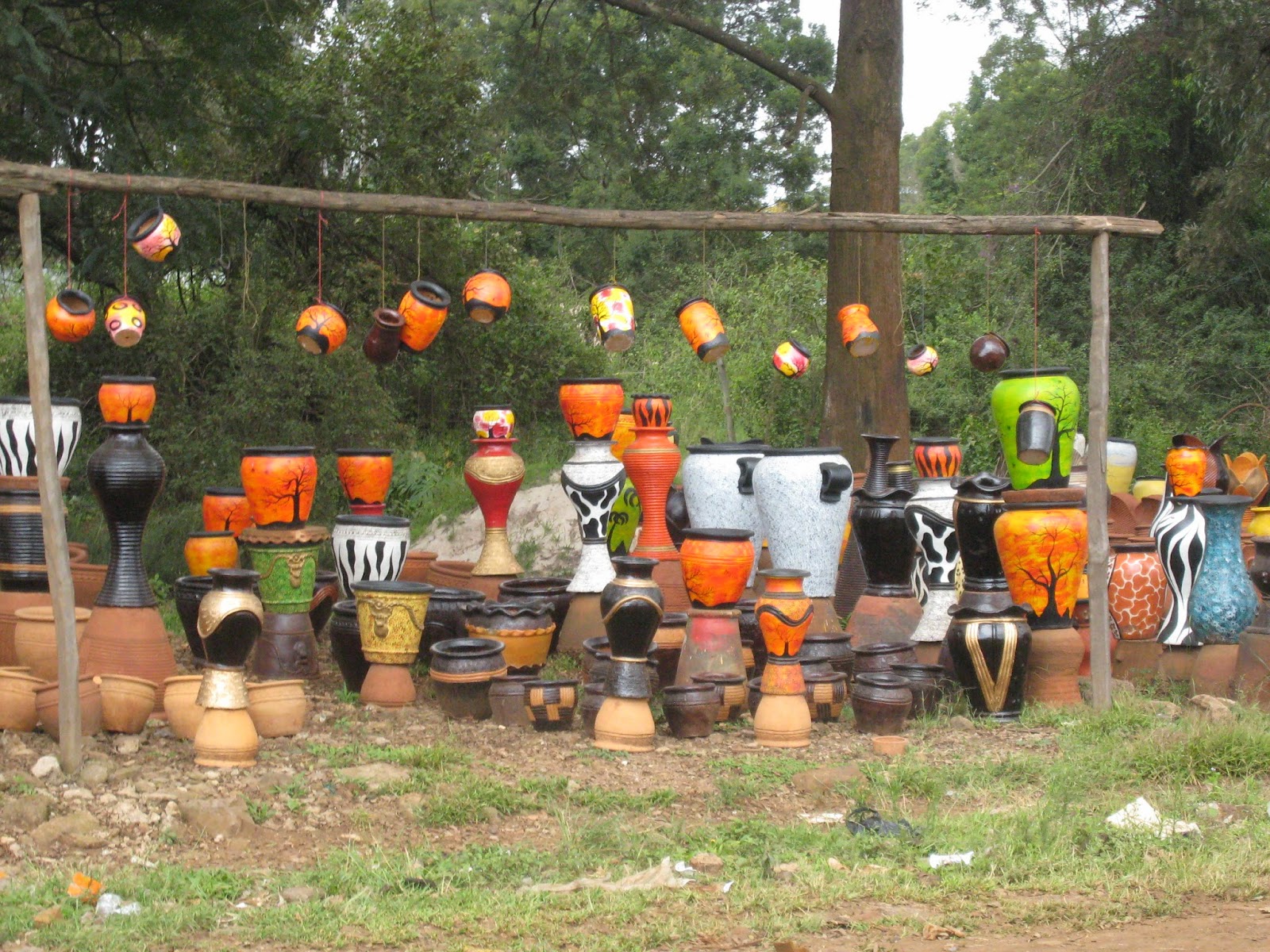 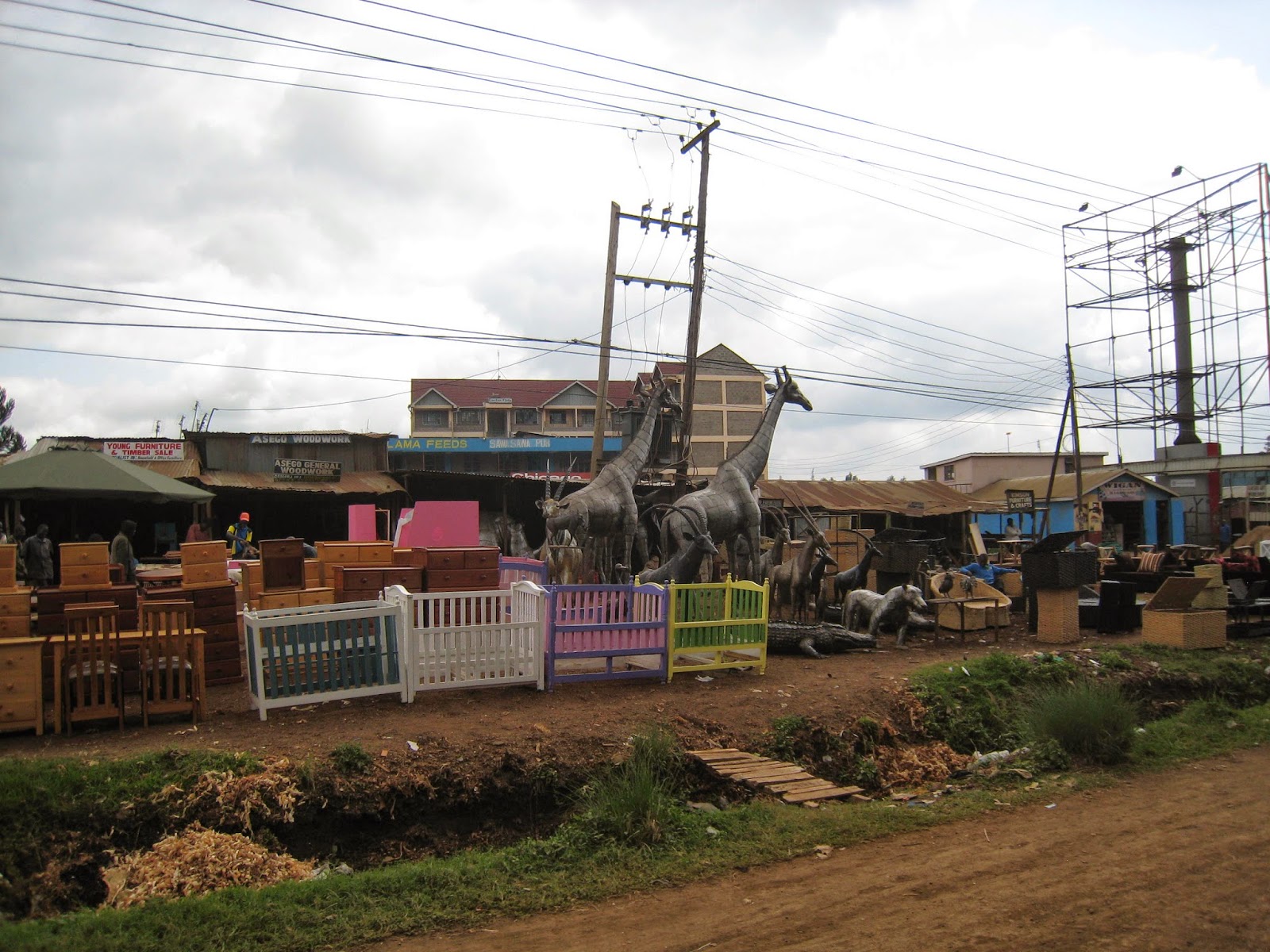 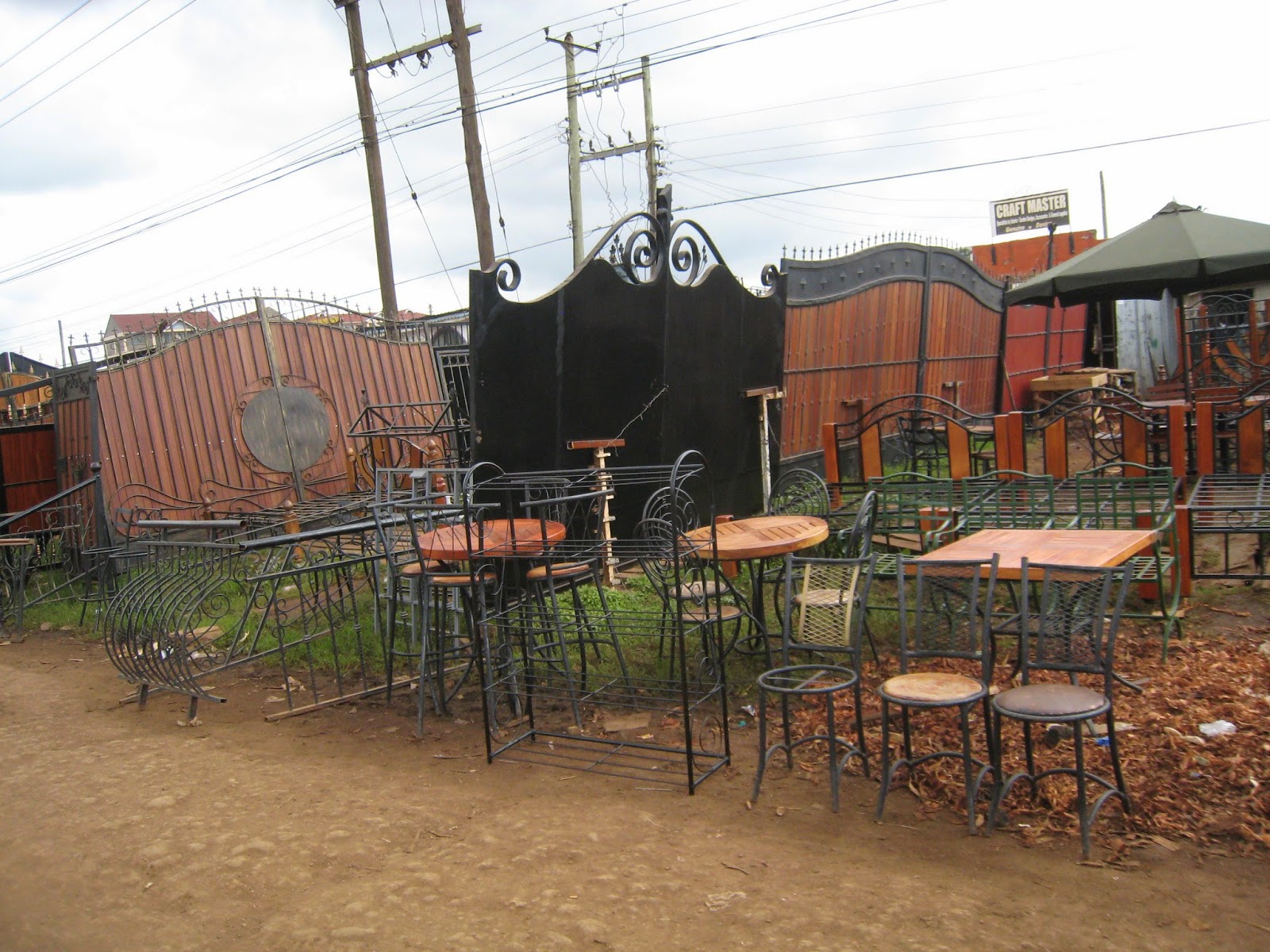 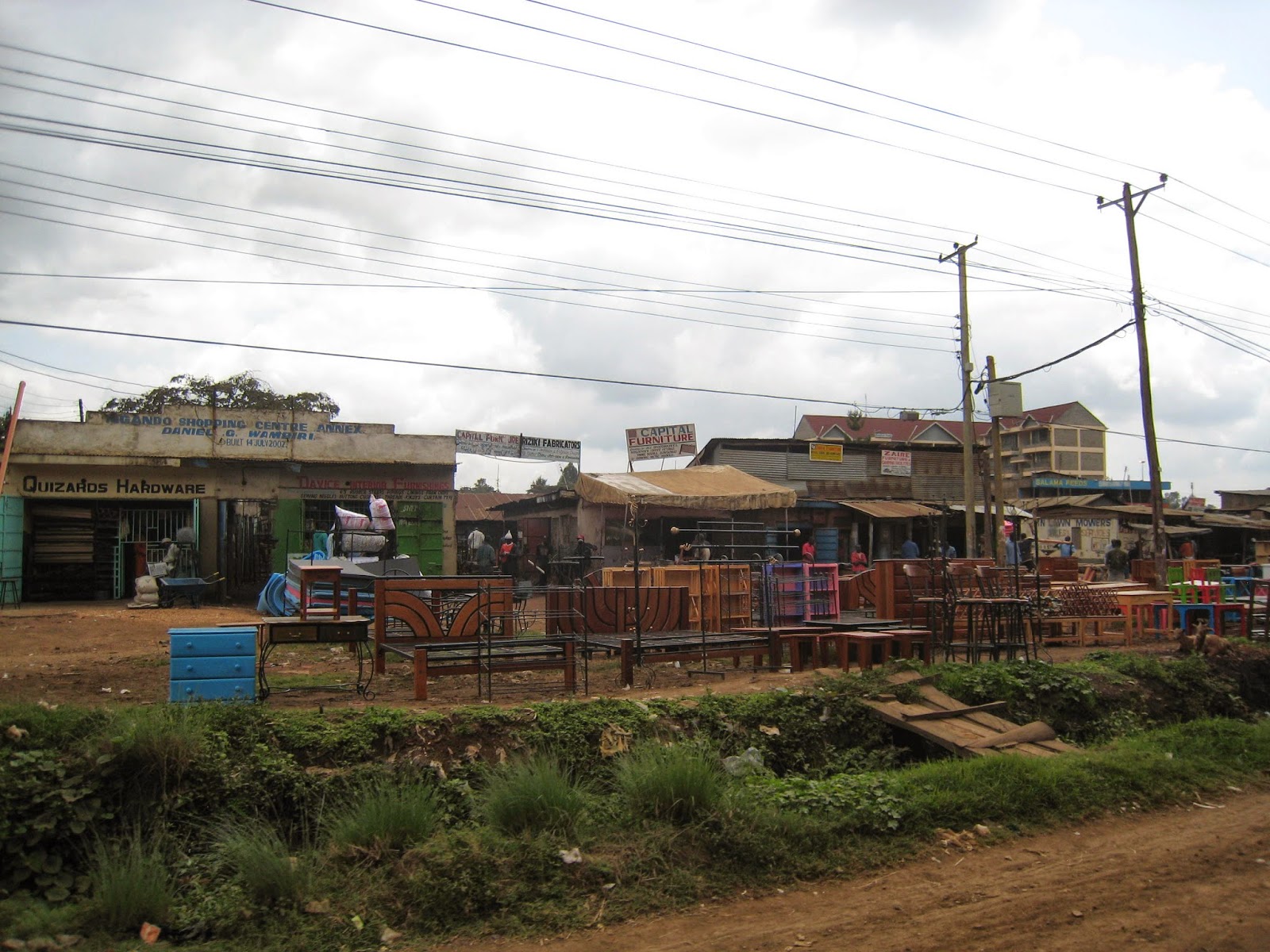 There were many similarities between Maseno/Kisumu and Nairobi.  You can tell that the people to the west are on a completely different economic rung, and a much lower one at that.  While I’ve seen iron works and carpenters as well as shirts and pants being sold, Nairobi had an entirely different feel.  To the west, they’re more concerned function and price, so appearance and “curb appeal” might not be that important.  In Nairobi, it’s like giving all those things a shot of steroids… maybe several.  The furniture on the side of the road was downright gorgeous.  There were metal sculptures, places to buy flagstone, the nurseries contained flowers that were in full bloom (yes, plenty of orange flowers) and potted trees waiting to be sold.  Ornamental flower pots were everywhere.  There was a lot of construction, too.  I’ve got a picture of one building, and if you look closely, you can see that the scaffolding is wood.  It’s actually a blue gum tree with the branches cut off.  Seriously.  Those trees grow ridiculously high, and the leaves are predominantly found on the top 1/3 of the tree.  They cut 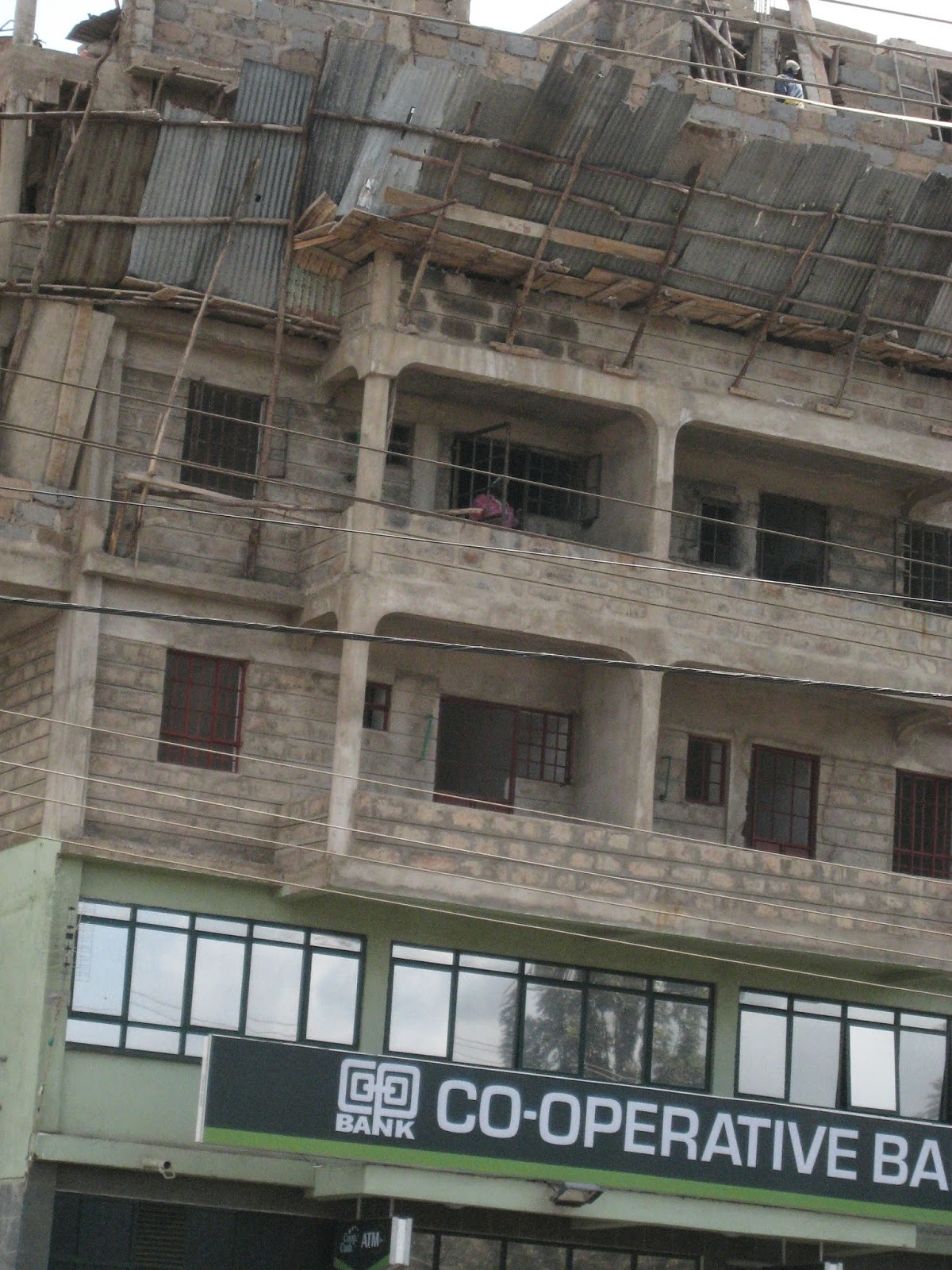 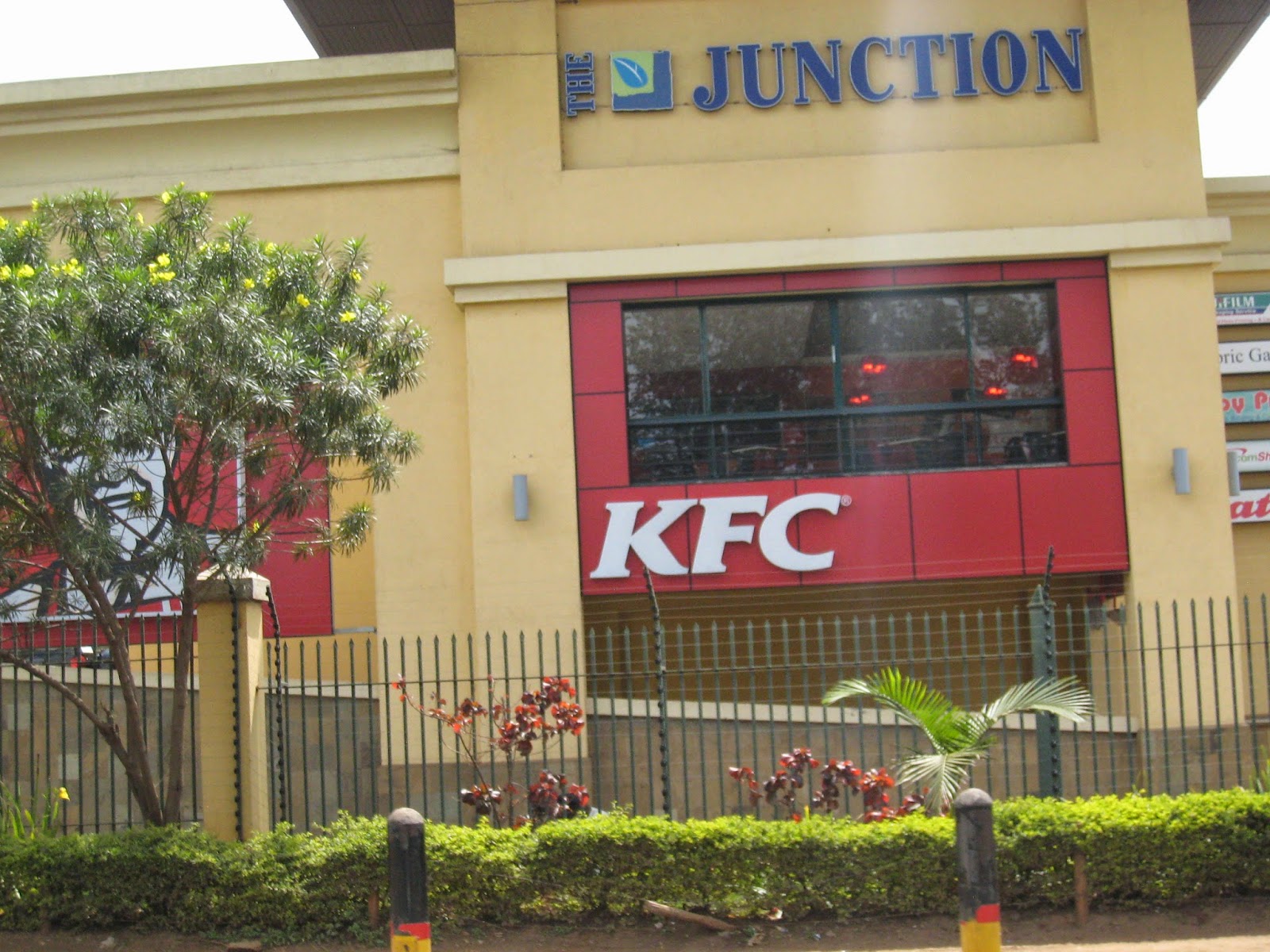 them down and use them for everything.  Another instance of OSHA staring in disbelief.  And  there’s the KFC.  There’s the true sign of a metropolitan city.  Kevin and I always wondered how it would taste.  Would it be tender like the colonel’s usually is?  Would they use all herbs and spices they were supposed to?  It doesn’t matter.  One, I’m a Popeye’s Chicken fan, and two, never try fried fast food in a third world country before embarking on 20 hours of flying.  I won’t bungey jump, and I won’t eat KFC before heading home.  The former may be safer, but both can end in absolute disaster.
Then we got closer to the city.  The congestion was horrible.  Needless to say, it took us over 2 hours to reach the embassy.  It’s this kind of ride that ensures that I will NEVER drive in this country.  The steering wheel on the left side is one thing, but dodging every manner of transportation along with pedestrians and salesmen is crazy.  When the light turns red or the officer directing traffic tells you to stop, you stop.  Then, almost immediately, men come from all sides selling you things from bananas to papers to skooters.  Yes, I said skooter.  Then you’ve got motorcycles wizzing in between the cars, stopping only to ask you to pull in the rear view mirror so they can pass.  Matatu drivers don’t help.  They like to change lanes for no reason and without regard for anyone else on the road, including the street vendors, who are literally in the street.  I was happy when we finally reached what I will call “Embassy Row” and were out of the heavy traffic.
First we passed the homes where the ambassadors lived, then we came upon the embassies themselves.  Most had high walls and a plaque outside denoting the country occupying that soil.  Then there was the American Embassy.  Lots of police, lots of metal detectors, then more police.  The embassy itself was significantly larger than most if not all of its counterparts.  We had to pass through two levels of security before we could speak through bullet proof glass to the person in charge.  She turned out to be the one in charge of all the police, and informed us that the office was closed unless their was an emergency with a US citizen AND we needed an appointment.  Two hours we’ll never get back.
They don’t let you park anywhere near the outside of the embassy, so John drove around until we called him to come get us.  When we got in, he said, “Now, only 30 minutes to airport.”  Not a chance.  More congestion, more insanity.
We did get to one spot where he said, “OK, now 15 more minutes.”  That was and a half after he said 30 minutes.  It would be another 45 minutes before we arrived at the airport.
We said goodbye to John and Job, both of whom insisted on hugging us, and we made our way to the international terminal entry point.  We made it through without any problems, we still had 3 hours before our flight.  We checked in, asked for an upgrade, and were quickly denied.  The flight was oversold and there were no seats in business or first class.  Yikes.  We got to immigration and Kevin said, “We never got exit row seats.”  Thank God he said something.  It’s only a 5 hour flight, but the leg room is invaluable.  We went back to the desk and got our assignments changed.  The manager on duty was very kind and accommodating.
We wandered around the terminal peaking into the shops before sitting down for a snack and a bottle of water.  The temperature here in the terminal is probably 15 degrees higher than outside, but it normally is.  I still wasn’t ready for it.  We finished eating and drinking and found a seat near the gate.  I got up and walked around some more while Kevin returned to reading A Game of Thrones.  When I got back, the gate was open so we went through yet another screening before being corralled in another seating area.  I tried calling Ann right away because I thought it would be easier to talk in here.  No such luck.  The world cup is on everywhere, and a large influx of passengers didn’t help.  We ended our phone call shorter than we would have liked, and are now waiting patiently to board.  There’s a man who has been coughing incessantly since he came in.  It sounds horrible. I’m afraid that a lung is going to pop out of his mouth!  I pray to God he’s not sitting near us.  Please feel free to make the same prayer.
The next post will probably be from Dubai but it will be short.  Not much excitement on a plane ride.  It will be just long enough for me to say, “We’re in Dubai.”


Here are some pictures of the Royal Resort where we spent the night.  I highly recommend it! 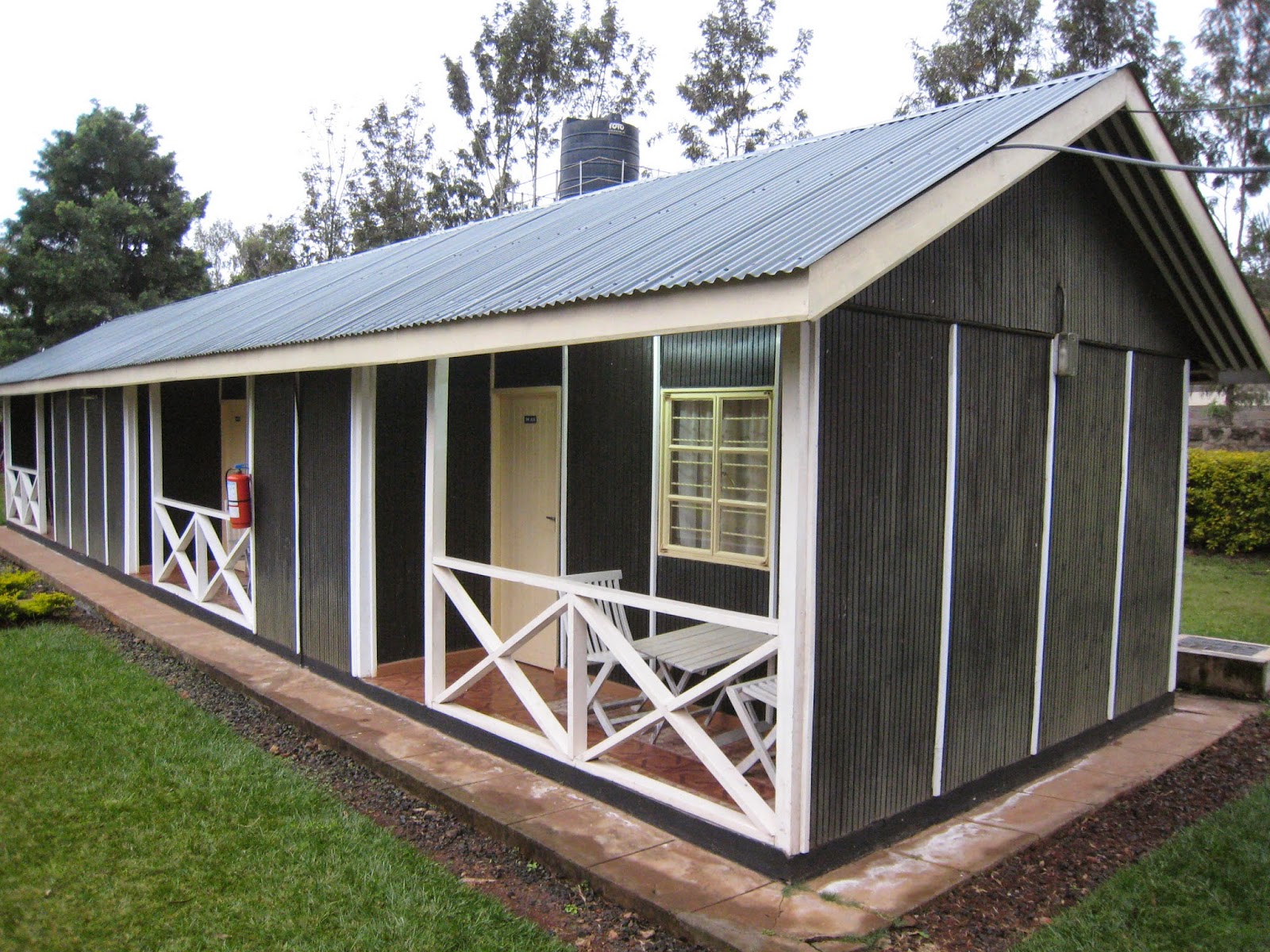 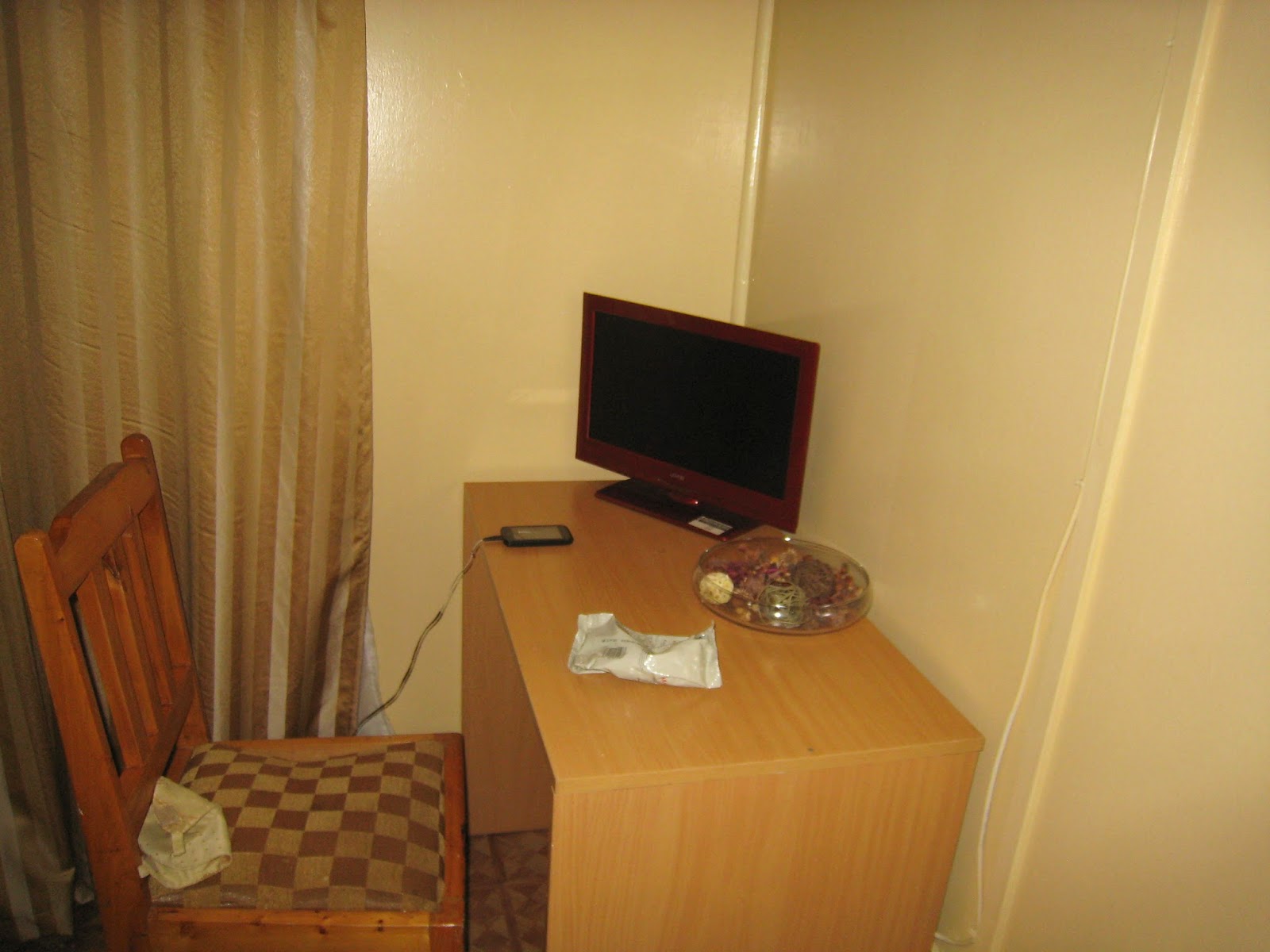 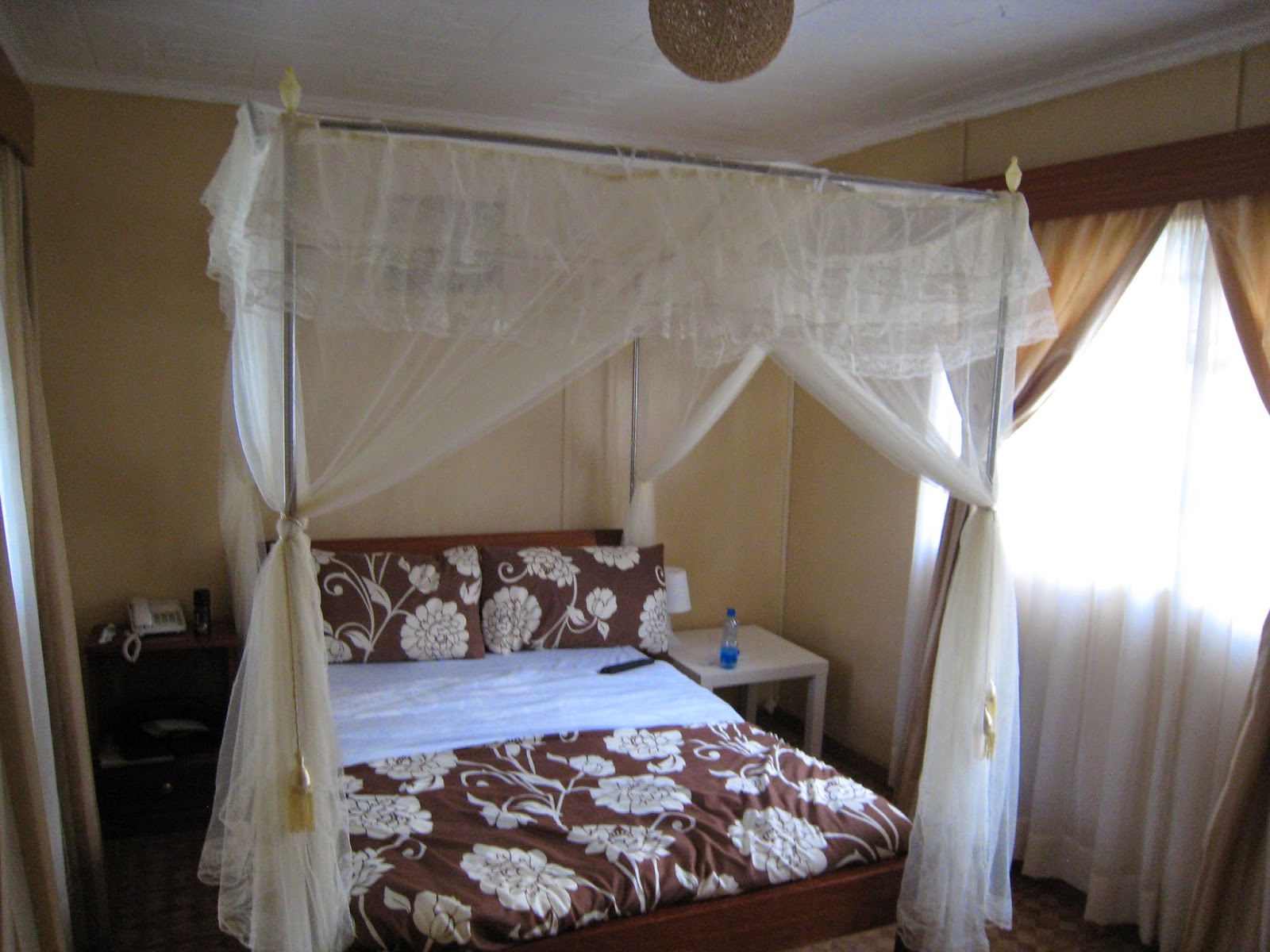 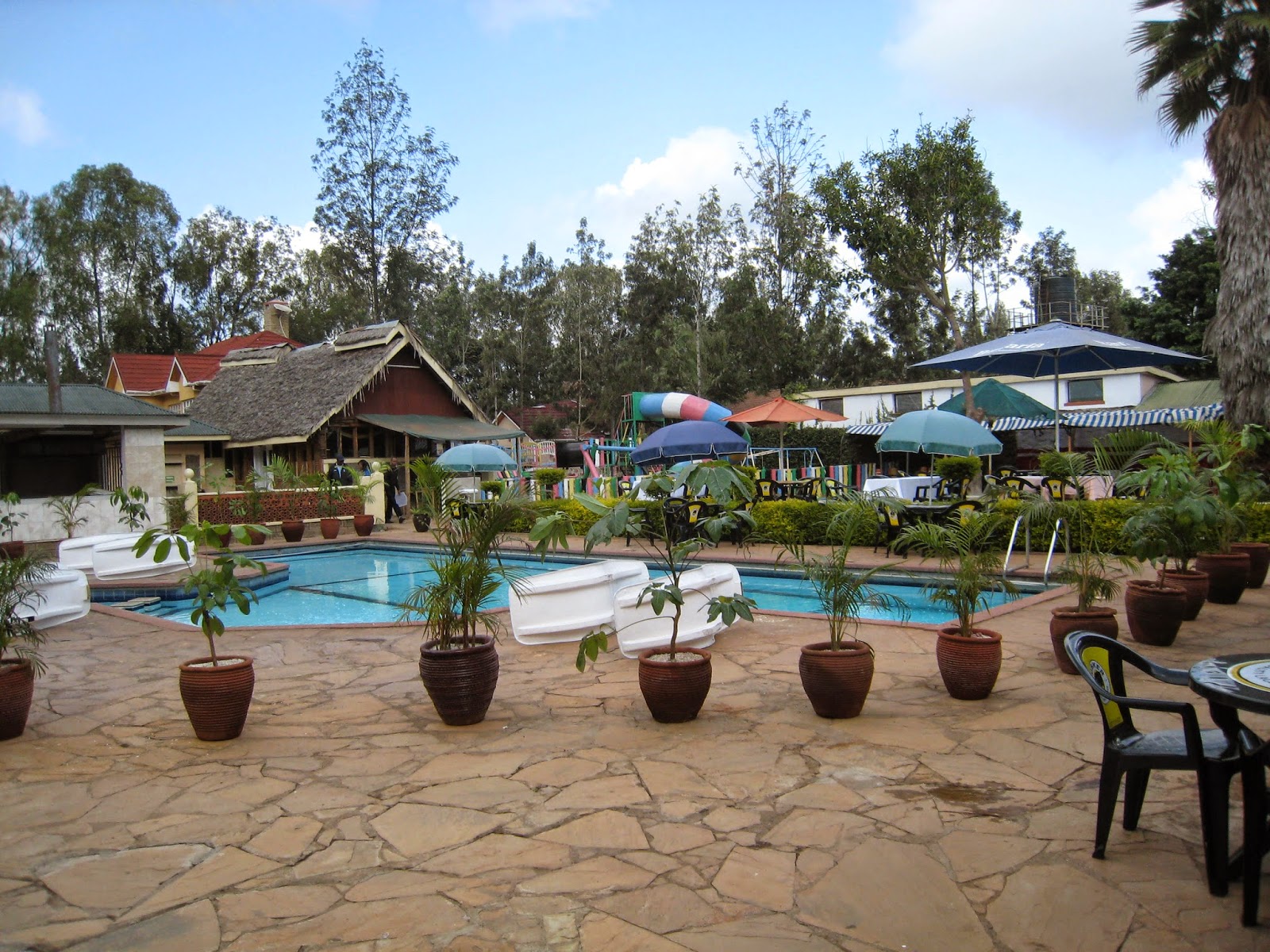 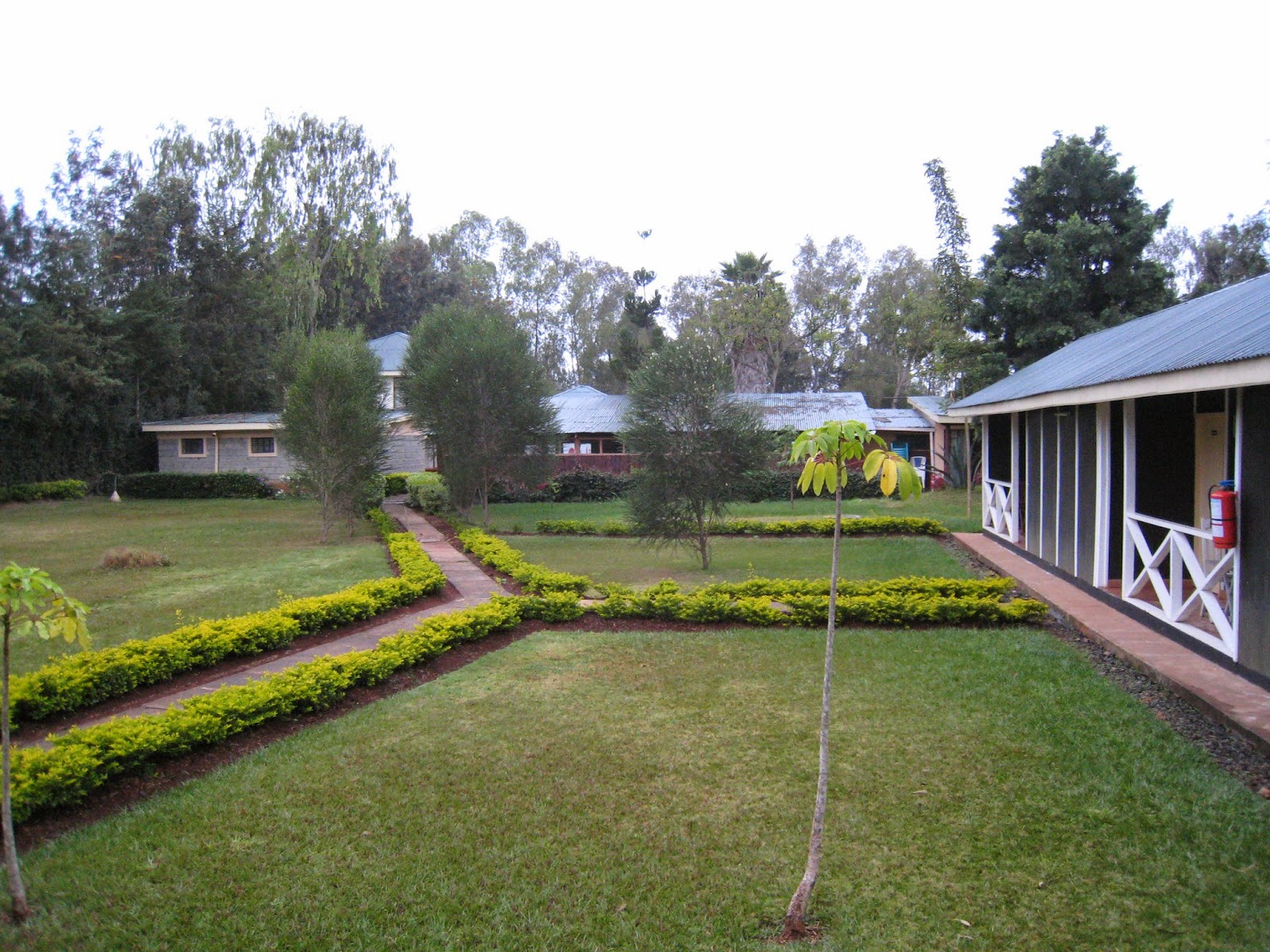 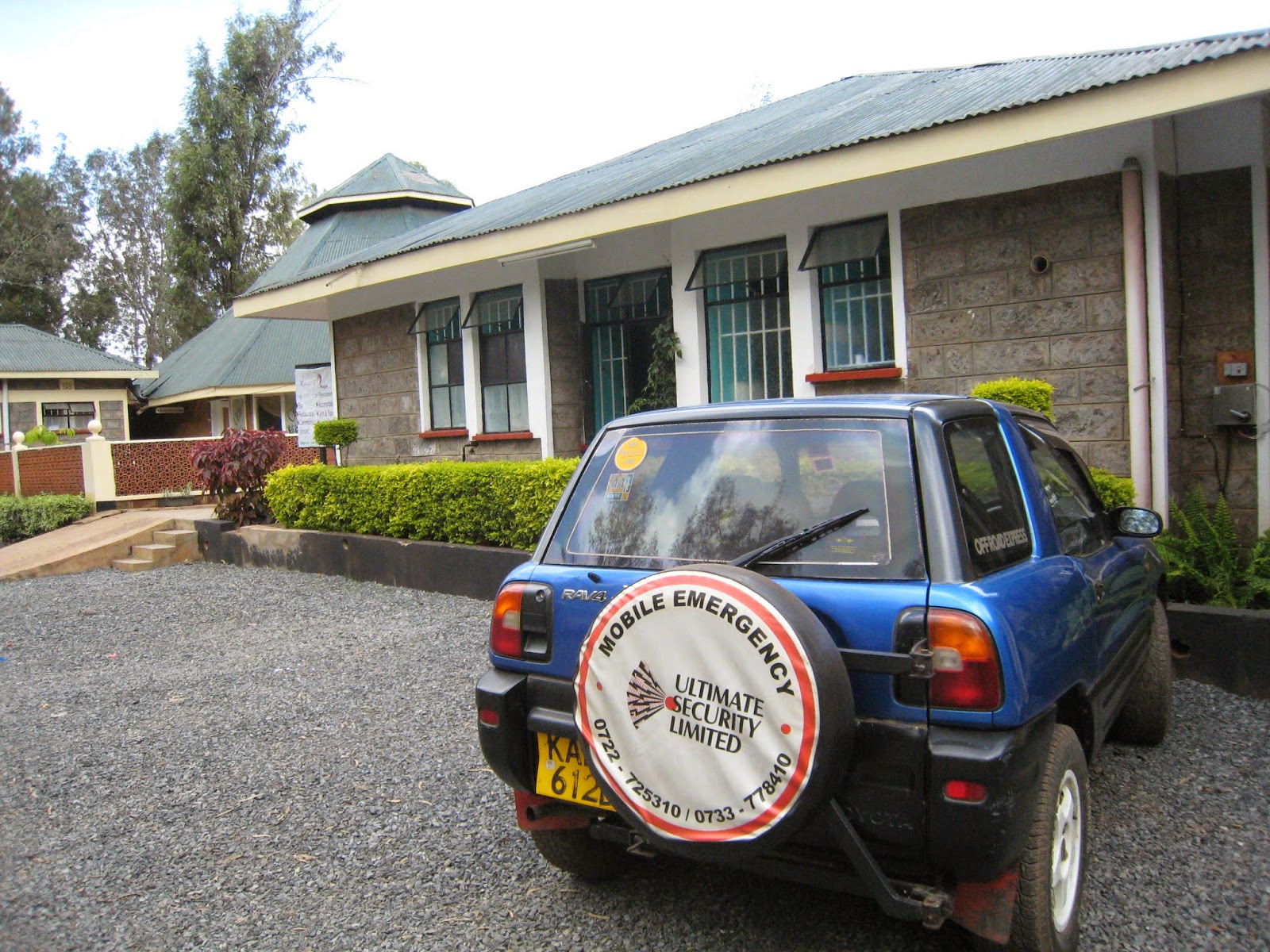 Below are jut some additional pictures we took while driving into Nairobi... some things I never expected to see... like a smart car?  Really? 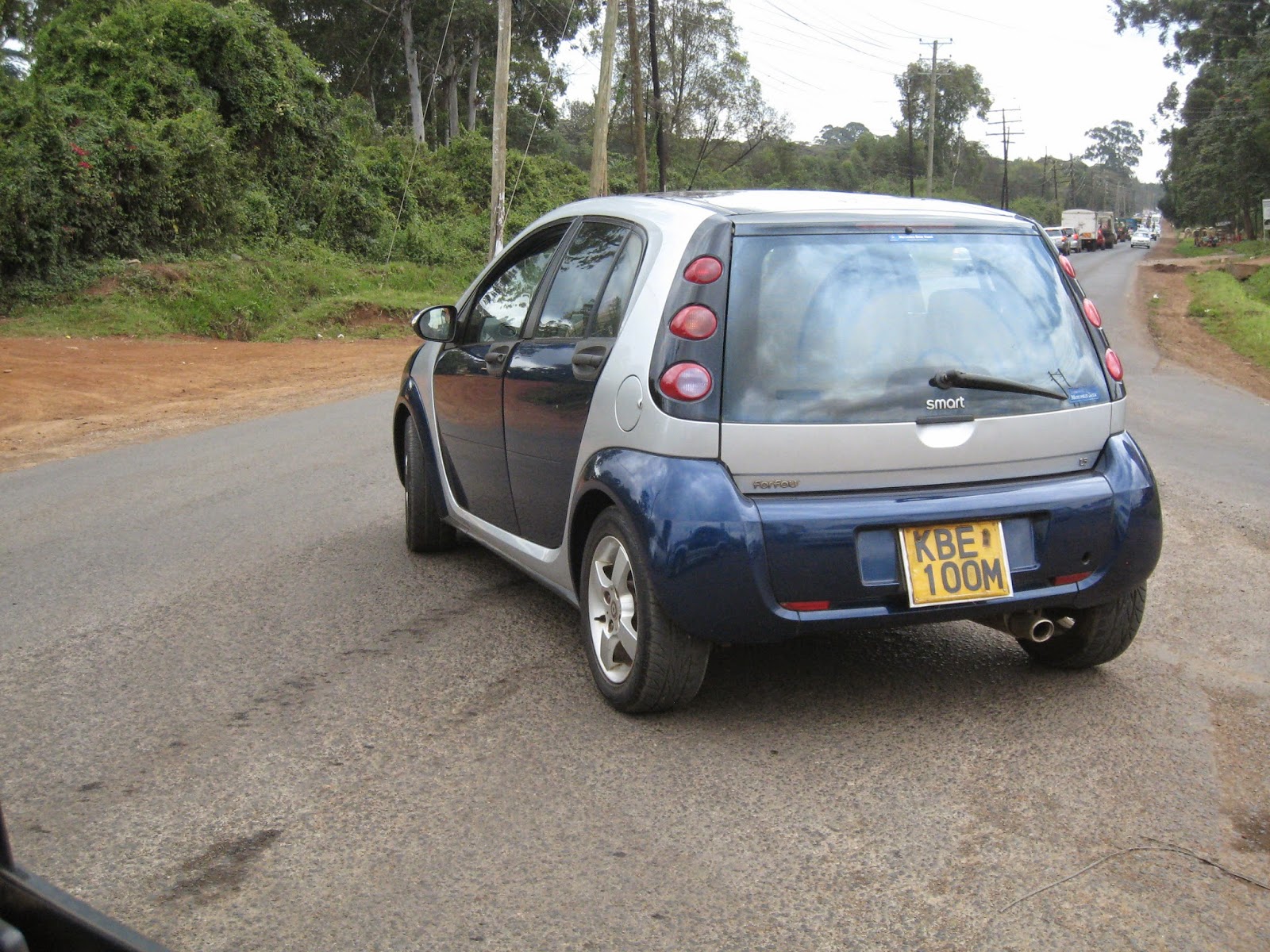 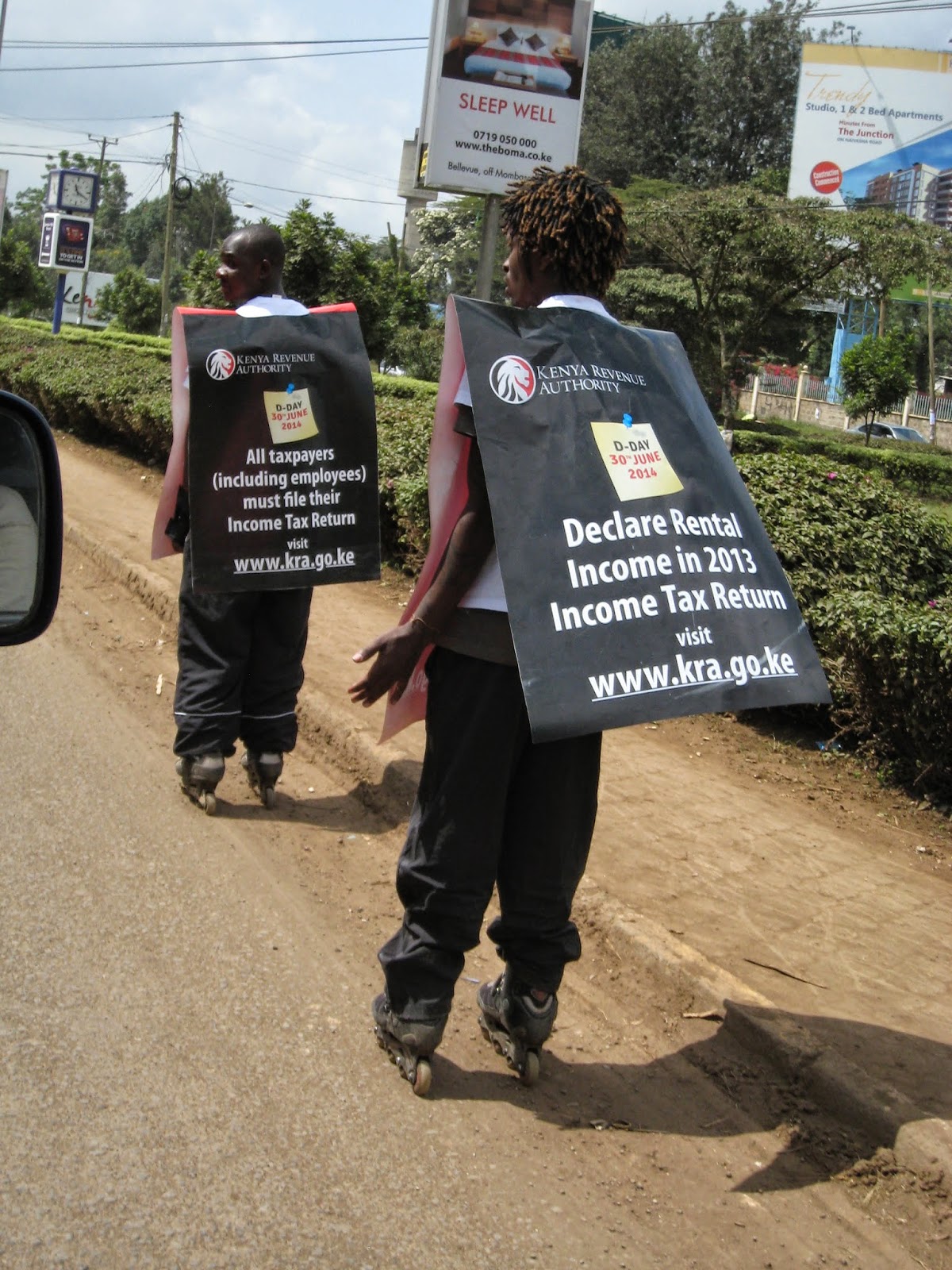 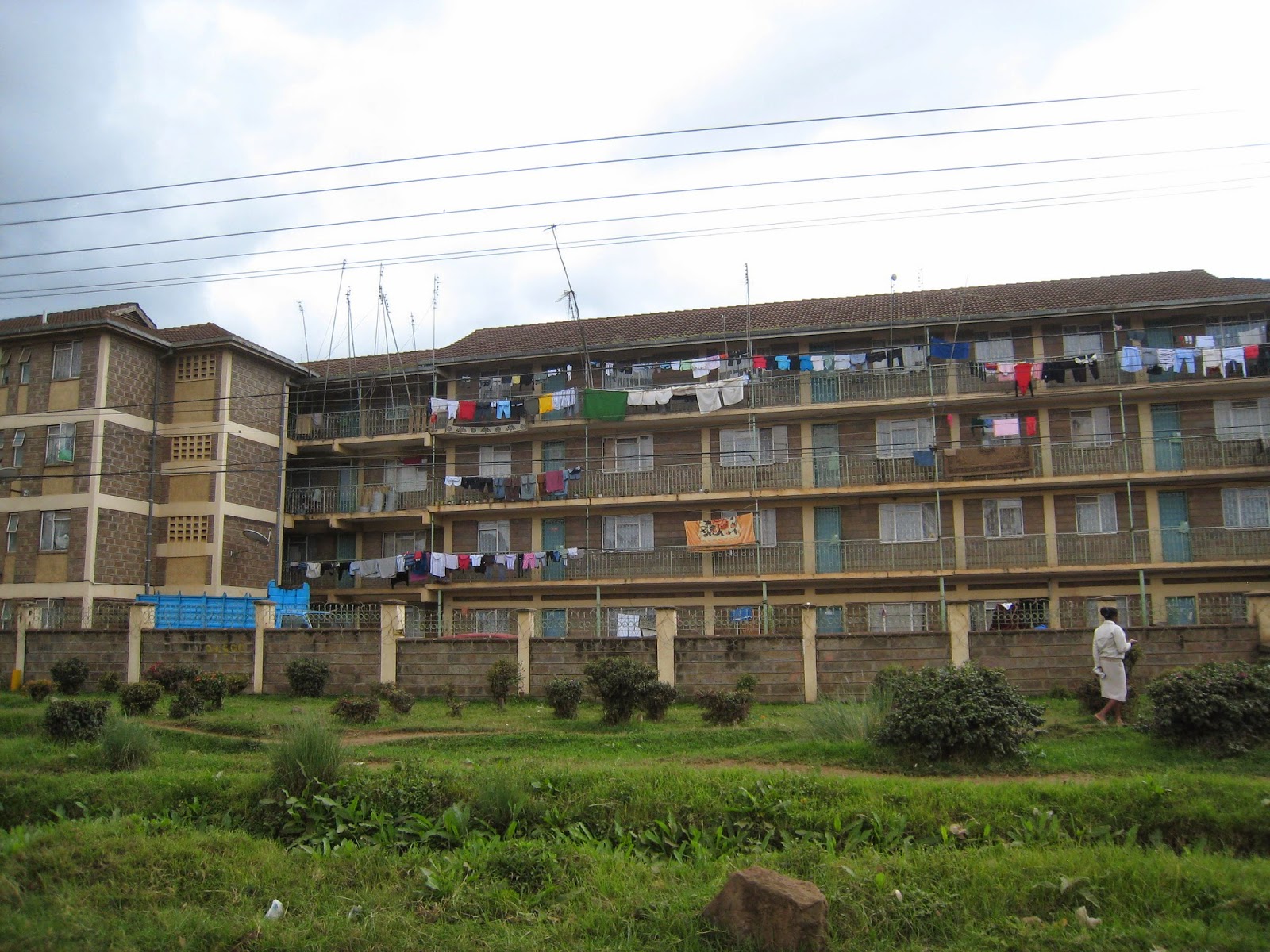 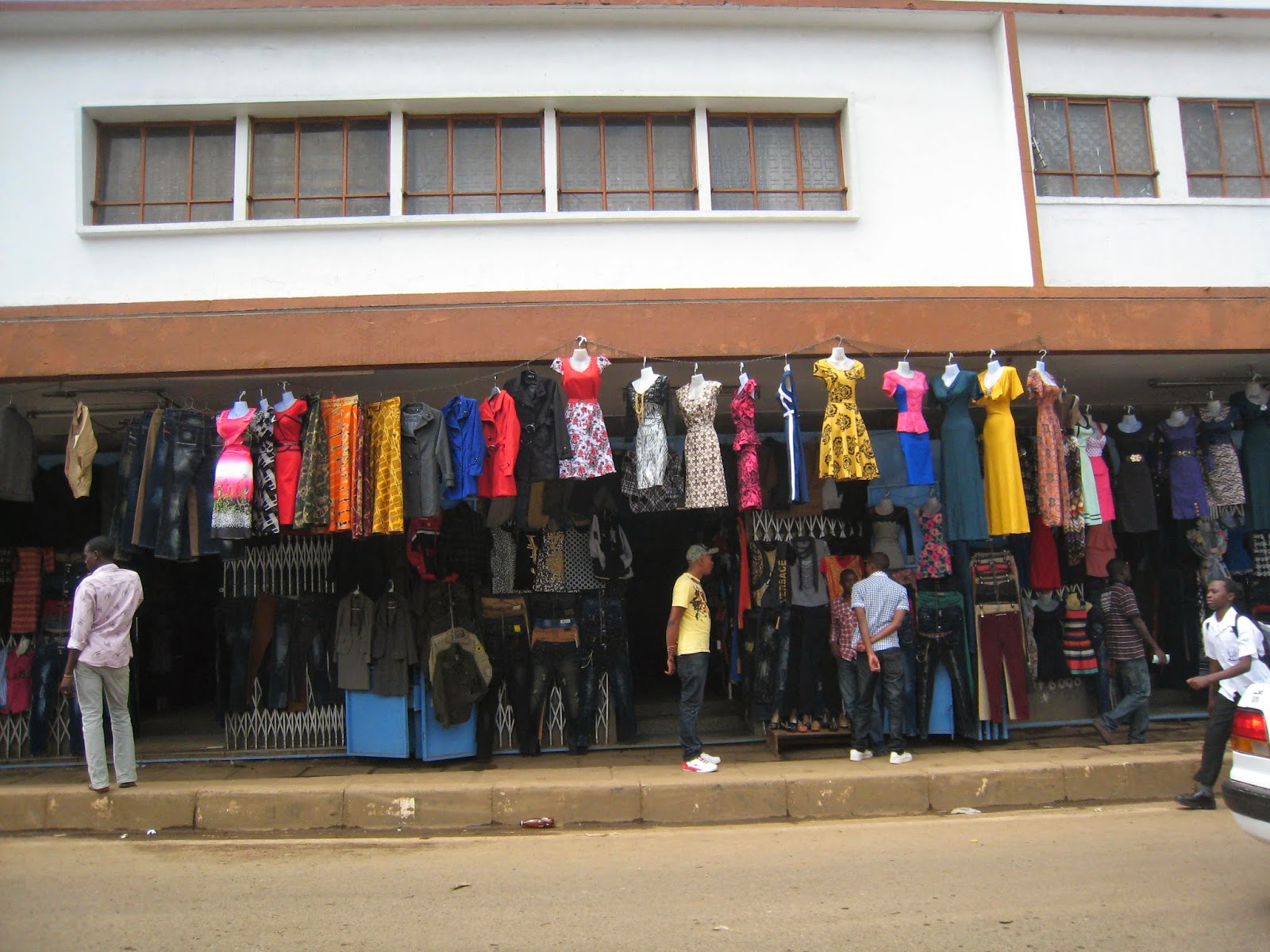 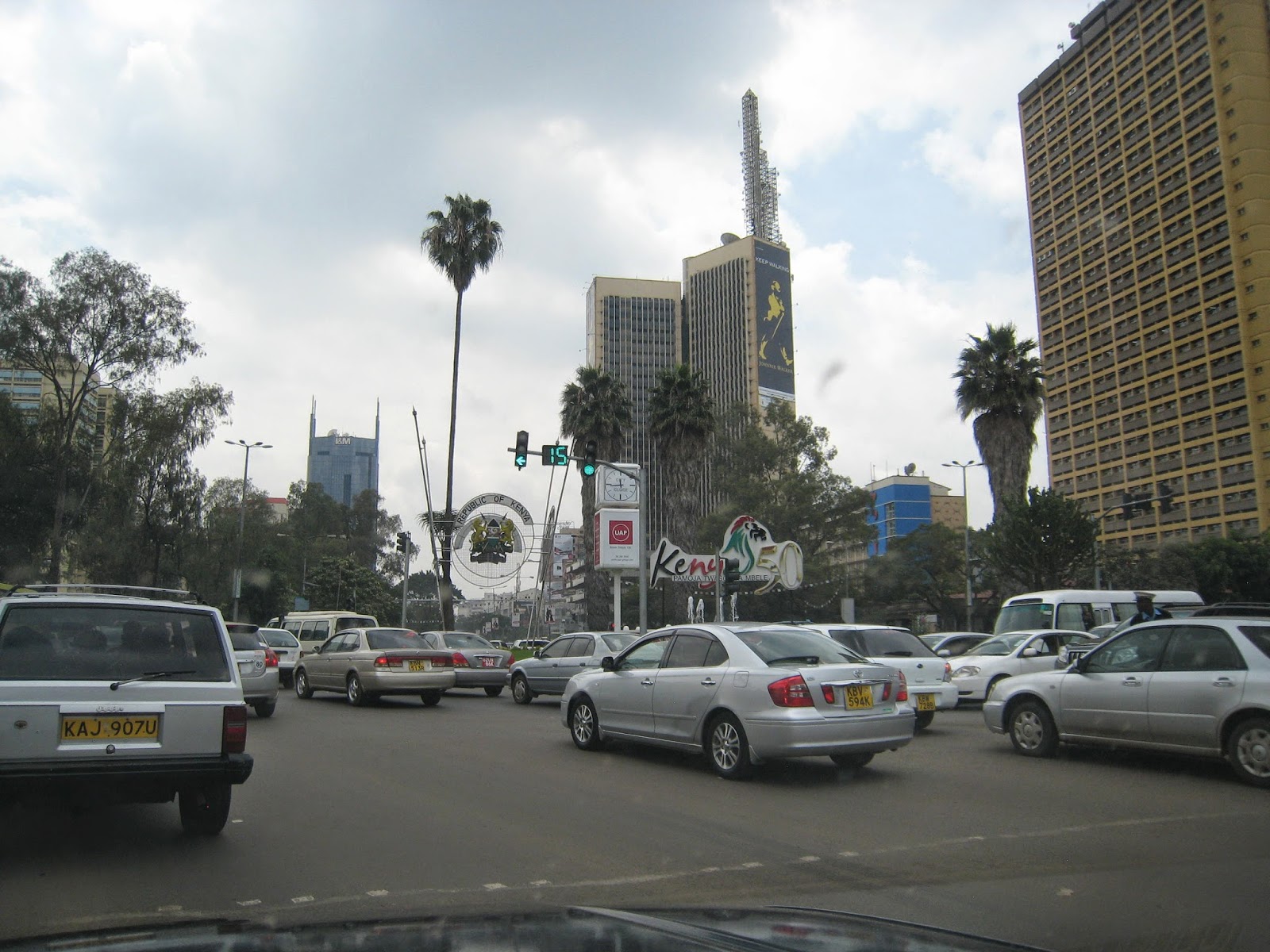 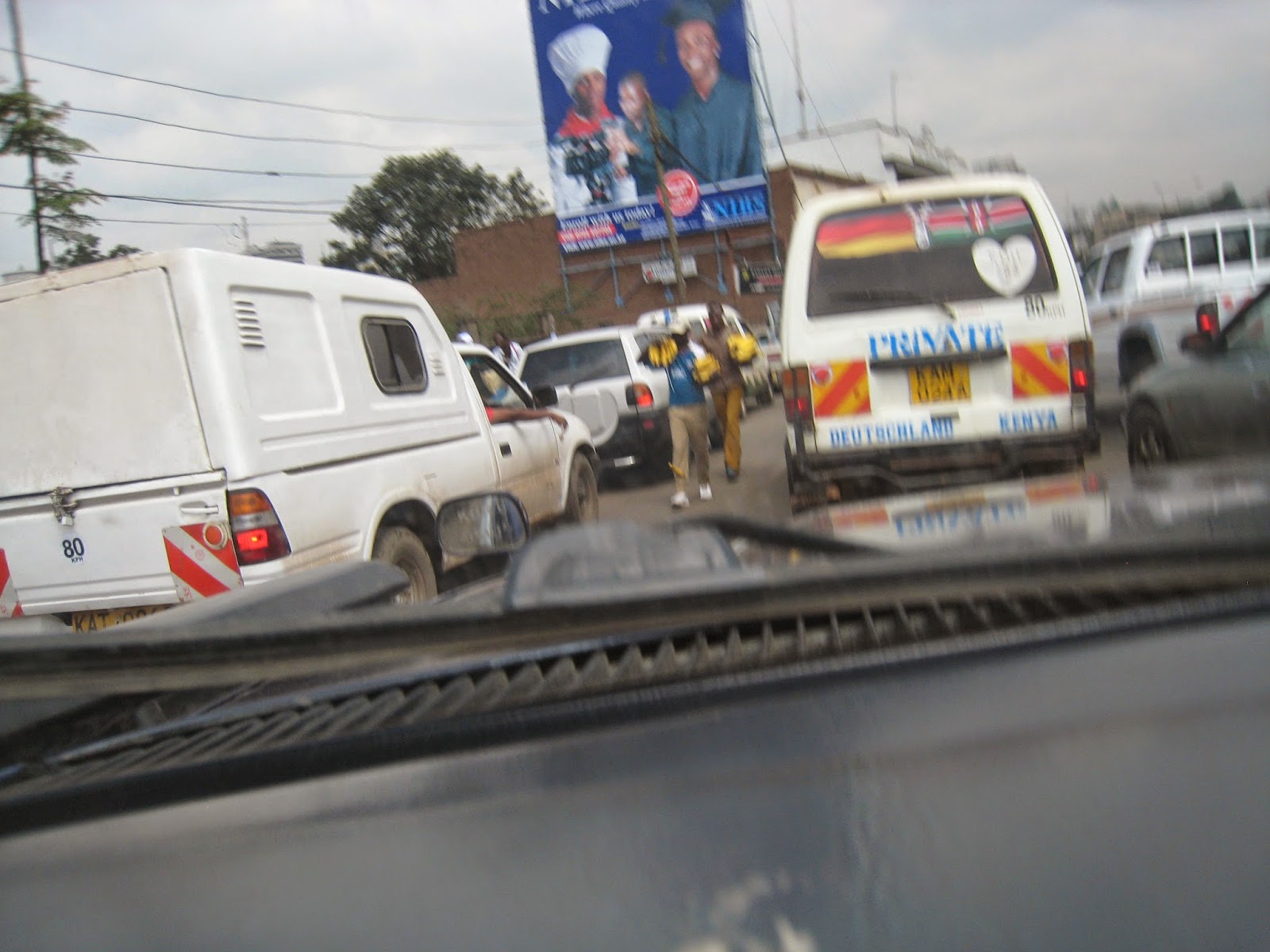 Posted by Adam Jablonski at 4:23 PM