Today was going to be a busy day.  We had a quick omelet for breakfast and headed for the Sekenani Gate at Masai Mara.  The Sekenani Gate is the entry point into Masai Mara Game Reserve and the Maternity Center is just outside the gate – which means it’s not inside the park.  There are some problems inherent with that, but we’ll be addressing them, too.  Being outside the gate means that those women transported by a vehicle inside the park have to pass through the security check to exit the park; often wasting precious time.  There is, however, a small entrance that you can walk through; not big enough for a vehicle.  Our plan is to close of the current gate and expand the walking gate to accommodate an ambulance.  No, they don’t have an ambulance, either, but we can all dream.  In actuality, we have a friend working on raising funds for an ambulance.  I’ll let you know when it’s up and running… if you’d like to help.  In the meantime, please continue to pray – everyone appreciates it immensely. 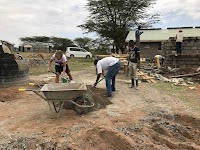 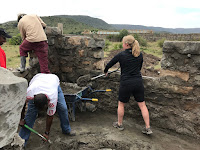 The center construction is moving along nicely.  They were 5-6 courses high when we arrived.  While we were excited to see how far along they are, we were only really able to mix cement.  There are no masons in our family, so we’re relegated to simply being a fundi (laborer).  That get’s old fast, so went into the Medical clinic that’s next door for a tour.  Moving the small very small ridiculously small maternity room inside the clinic is still small.  It’s actually broken into two rooms; a labor room and a delivery room.  Neither looks comfortable, neither is inviting, neither accommodates much more than the patient.  One of the other positive outcomes of creating a stand-alone maternity center is that it frees up even more room for the clinic.  Once the equipment is moved to the maternity, it opens up two additional examination rooms for general health issues.

After the tour, we went inside the park and checked into Entumoto – the camp that Isaac manages.  We were greeted by the stIt was uncharacteristically quiet, hosting two guests from Australia and now the three of us.  We walked up the long path to the tent, passing by water buck (kind of like a big, furry deer) grazing in the valley below.  Entumoto is a designated conservancy inside the park.  That pretty much means that they’re their own park, inside the park.  We’re staying in a family tent which has two rooms separated by a sitting room.  Again, don’t think tent.  Think, TENT.  We dropped our bags and returned to the dining room for a wonderful lunch that consisted of vegetable pizza, apple and carrot salad, and a quiche-like thingie that was fabulous.  Even more fabulous was the mango mouse that ended the meal.  It was served in a champagne flute with an angled layer of strawberry jello, and topped off with some whipped cream.  Not the typical fare when we’re anywhere in Kenya except in Masai Mara.
We jumped back into the van and headed for a Masai Rescue Center.  This is not for the faint of heart.  Palygomy is common among the Masai, and although it is unlawful to marry anone under the age of 18, it happens.  You’ll hear how frequently in a moment.  Wives produce children, who are able to tend to the father as well as the livestock.  When wife #1 gets too old, enter wife #2… and so it goes.  Once married, the woman, or girl, would potentially be circumcised.  I wasn’t aware that there were varying degrees of female circumcision, but there.  Sometimes, it’s a complete circumcision.  I’ll let you Google that.  Regardless of the degree, it’s all mutilation… and it is also against the law, but it happens.
Enter the shelter.  Started by a woman from Washington state, this facility is sanctuary.  A tall stone fence accented with an electric fence surrounds the 5 acre plot.  Girls are brought by their relatives or friends to save them.  Sometimes they walk their by themselves.  Either way, the older Masai don’t like it, and try to take the girls back.  An electric fence is an excellent deterrant.  James is the current caretaker.  He told us stories about his going into places to rescue girls himself.  Several years ago, he had heard of a 6 year old girl that got married away.  He went to retrieve her, and when the husband learned what happened, he came to take her back.  I’m happy to say that she is now 10 and happy with a bright future.  There is a school right next to this facility.  There is a fenced walkway connected to the school to further ensure the girl’s safety.  We’re standing in this place, and it’s completely unthinkable.  It’s impossible to wrap your head around some of these atrocious scenarios, yet here we are.  Standing inside the compound is surreal.  It is bright and warm and filled with caring and laughter.  There is no sense of the horrors that lie outside the high stone walls.
It currently houses 63 girls, each of whom either were married, or were about to be.  The average age was between 10 and 12.  That’s not a typo.  The average age was between 10 and 12.  You’re not a wife at that age, you’re an indentured servant.  These girls all look after each other.  There is a comraderie among these girls that is palpable.  The older ones who have been here for a while know what the younger ones are going through.  They know how they feel.  They are a constant reassurance of the safety of this place.

When we first arrived, a smiling little girl came closer, shook our hands and said hello.  She shyly receded back to the building she emerged from earlier, but by the time she turned around she was joined by 3 more friends.  They were among the group of 35 girls we met with as we handed out school supplies, soccer balls, jump ropes and sandals.  We also had plenty of underwear to go with the pillowcase dresses that were either donated by our friend Dansville Dianne, or made by Andrea and her friend Diane prior to our departure.  We have an army of women ready to make more for us to take over when the maternity is finished.  You see, when these girls arrive here, they have nothing but the clothes on their back.   The Rescue Center survives on donations.  Funds are used to provide food, clothing, shelter, schooling etc.  It’s simply amazing.  James is assisted by Ruth who helps to teach the children things they would learn in Home and Careers in the USA.  Sewing and cooking are top of the list, and to help those efforts, we also brought a dozen sewing kits.

As we fit the girls with dresses, the rain began to fall.  Then it began to pour.  The sound of the rain hitting the tin roof sounded like dropping a box of marbles on a tile floor.  It was deafening.  We were shouting just to be able to hear each other.  It was the perfect time to present James and Ruth with umbrellas.  They both opened them and stood as though they were Gene Kelly and Debbie Reynolds.  The part that made me smile the most was not their joy in receiving the gifts.  Althgouh they were certainly grateful, it was the children that impressed me the most.  They cheered with happiness to see that their caretakers were happy. 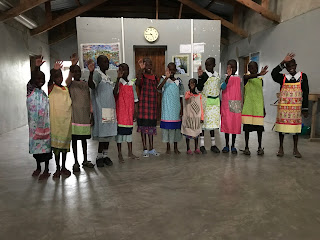 Again, palpable.  As we were celebrating and playing, a young girl appeared in the doorway, soaking wet.  Sanctuary.

The older girls quickly whisked her away to their room where they cleaned her up and fit her with dry clothes before bringing her back outside where everyone embraced her.  Literally, they gave her hugs.  It was beautiful.  This place is beautiful.  Agnes was 12 – same as the  number of miles she walked to get here.  She left her “fiancé” and her relatives, and at the end of that walk she became the 64th sister of this marvelous family.

We watched them baking bread and gave them a chance to play with Karen's hair (always a hit, and Andrea got in on the action, too) before exiting the compound and heading back to Entumoto.  The rain had slowed and we wanted to take advantage of the break.  We talked about the girls for the entire ride.  Although the animals caught our eye, it was the girls that captured our hearts and minds. 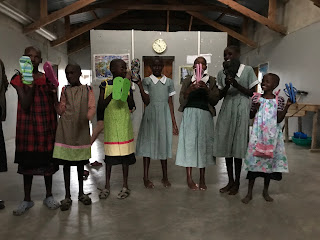 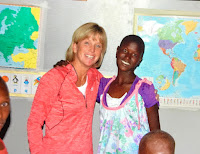 Dinner that night consisted of tilapia with rice and snap peas, and desert was “fruit with luxurious candy.”  The "luxurious" part was a spun sugar design that rested atop the fruit.  It didn't matter what they called it, we all thought it was fabulous.
We’ve dicided take a hot air balloon ride tomorrow morning.  When I say, “tomorrow morning,” I mean we have to be ready to leave at 4:45am.  Yikes.  Now you understand why my blogs are so late.   We’ve always seen them flying and never taken one, so this will be a first.  I’m not terrified.  Yet.  If there’s another post, you know I made it back alive.
Posted by Adam Jablonski at 2:05 AM