The day started out like any other, with the exception that everyone slept through the night.  The drive back from the Mara took it’s toll and we were obviously exhausted.  It also caused us to change our plans around.  We had originally planned a drive to Maseno to visit the clinic and meet with friends, but our minds were not ready for another 4 hours in the car so we decided to visit Isaac’s parents instead.  It was a good decision.  We left shortly after breakfast on the 45 minute drive to Kisiriri.  Unlike the lowlands of Masai Mara, the highlands of Kisiriri are plush with green produce and wheat fields.  Looking out the window you wouldn’t know that you were in Kenya… it’s could have been landscape from any farming community in the US.  The occasional donkey or roadside fruit stand reminded us otherwise; that, along with the children playing along the road.

We arrived at the house and were immediately greeted by Isaac’s father.  He gave us a wide smile as we entered the compound and I hopped out and gave him a big hug. “Sopa!” I exclaimed (“Hello” in Ma’a).  I smiled and hugged me back.  His 80 year od frame was so thin that I could have wrapped my arms around him twice.  His long gray hair was just as full as I remember and he had begun to show rounding shoulders.  The others hopped out and greeted him with Isaac translating.  I would pick up words here and there, but he (much like grandparents in the us) would speak in three different languages at once.  Ma’a, Kiswahili and Kikuyu were running off his tongue so fast that even Isaac had trouble deciphering. 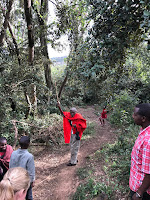 We stepped inside their very humble home and we surprised them with umbrellas.  The last time we were there it was raining as we toured the grounds, and I noticed that their umbrellas could stand to be refreshed.  They smiled and laughed with glee as they opened them… again, Isaac translated.  Although I know they have superstitions here, opening an umbrella inside is not among the list.  They then treated us to mashed potatoes, goat and chipati, all of which were wonderful.  The ladies have come accustomed to “no thank you” portions of goat and are comfortable enough to decline completely if so inclined.   Afterward, it was time for a tour.  Isaac’s father takes great pride in his accomplishments, as well he should.  This land was all forest before he arrived and he cleared it all by hand in the 50’s.  Now he grows all kinds of fruits and vegetables and pointed out some of the more unique aspects of the farm.  What looked like weeds were actually used to make insect repellent and smelled like a more robust lemon grass.  The next “weed” we saw was used to treat stomachaches.  The tree next to us is cut and it’s fibers are used to tie off umbilical chords after child birth.  Certain trees were used for timber, while others were used to make whips (Tatiana and Caleb smiled as Isaac gave a demonstration).  It’s like an outdoor Wal-mart!  Isaac’s father had no problem navigating through the fields, up and down some pretty steep terrain.  He never slowed and never seemed short of breath as he lead the group; picking up various nieces and nephews (and even a stray neighbor) along the way.
Several of his sons still have homes here and I was happy to see Isaac’s older brother David as we made our way back.  We had stopped at his home to use their long drop and ended up staying for tea.  It was served outside the main home where most of the female cousins had gathered to discuss their faith – sort of  a Kenyan Bible study.  I stepped inside briefly to say, “jambo,” and true to form they all grinned when I spoke a little Kiswahili.   Usually, people are surprised that I speak the language at all.  They do, however, seem glad to know that I’ve took the time to learn it.  Anywho, Andrea and I sat with Isaac in his sister-in-laws kitchen.  It was a mud and wood structure with a dirt floor, one window and one door.  The room was filled with smoke from the wood fire burning under the window – that’s the only reason Karen didn’t come inside… the smoke was pretty thick, and although she opened the door, it did little to help the smoke dissipate.  Above the fire sat a grate and atop the grate was a large pot of milk.  It’s customary to be offered something in every home you visit, and this one was no exception.  Chai is usually preferred because there’s always hot milk available in a Kenyan home, and it’s usually the shortest visit.  If it wasn’t, we wouldn’t accomplish anything – we’d be too busy drinking tea.
David came home while we were there, and smiled wide as he came to say hello.   We brought a utility multi-use tool for each of Isaac’s brothers, but David has been the only one to receive it in person – the others have been working while we were around.  The one I gave his father the year before was well received and Isaac told me his brothers were very interested in it. 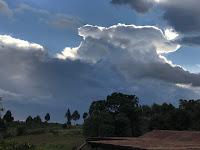 We said our goodbyes through our translator Isaac and took some photographs of the group.  The timer on my camera has come in very handy for moments like this.  The ride back home was full of laughter and joking and the sunset was beautiful as we drove past the wheat fields.  Our plan was for Karen to spend the night with Tatiana at Isaac’s house, but when we got home she realized that she had homework to do.  Ann, on the other hand, was still very tired and the thought of eating at 9:30pm was not helping.  We had arrived home much later than we had planned and restaurant food prep time here is less than favorable.  We often call an hour ahead of our arrival and still manage to wait up to 45 minutes.  The restaurants in malls are usually much faster and closer to what we’re used to back home.  Tipping here is also unusual; it’s more common around visitors but the locals just think it’s odd.
I had to call Isaac to let him know that they wouldn’t be joining us for dinner.  He understood and came to pick me up.  The restaurant was right down the road – probably 200 yards away.  It was set back off the road and I wouldn’t have known it was there except for a small sign that said, “Members Club.”  It’s a restaurant owned by the government.  It was rather non-descript on the outside, broken up into 5 areas consisting of 3 private dining areas that accommodated about 8 people, a bar room (including pool table) and a larger dining area with many tables.  We left the car and headed to one of the smaller rooms where Leia sat with Caleb and Tatiana.  Tati was clearly tired and looked like she was more asleep than awake.  Caleb was good, but he was starting to fade.  The food came another 45 minutes later.  I made the mistake of ordering a Tusker when we sat down.  Thankfully the food arrived just as the Tusker was taking effect.  Chicken, roasted potatoes and skumawiki (stewed kale).  The roasted potatoes were my absolute favorite meal.  We got some barbecued goat for the ride out to his parents that would have beat it in a contest, but the potatoes were wonderful.  They were the equivalent of small white potatoes that were pan fried.  You’d break them open to cool off.  The outside were crispy and they were pretty much really fat French fries.  I must have eaten 6 of them.  Once again, I slept like a baby.
Posted by Adam Jablonski at 10:15 AM