Interlude... or, "Some Stuff I Failed to Tell You Earlier"

So much is crammed into our days here that I often pass over some very important moments.  Because I am so far behind with these posts, I thought it was important to get them posted. 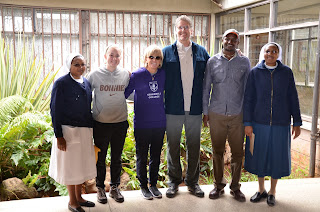 On day one, when we arrived in Nairobi and en route to Karen for our first night, we passed by Catholic University of Kenya.  Andrea asked, “Can we stop by there tomorrow?”  Isaac, as always, said, “Shoo-ahh.”  I think I may have already mentioned that we had 200 rosaries in our possession.  Andrea is always on top of her game, and saw the university as a potential recipient.  We returned the next day and enter the grounds.  We were looking for the church, but as we turned, we saw two nuns enter a building.  We followed them in and introduced ourselves.  We explained that we had the rosaries that were provided by Holy Cross Family Ministries and as we spoke, the young nun’s smile grew.  You’ll never guess what her name was… okay, maybe you can.  Mary.  She and her friends were their working on degrees in business and health care.  She was part of an order that only exists in Kenya and Uganda.  I’m waiting for an email with the correct spelling, but she is with the Danese order of sisters.  Sister Mary and her friend, Sister Agnes, graciously accepted 100 rosaries with the hope of crossing paths with us again.  They are very interested in education and thought it would be a nice fit to work with Building Futures, Inc in some of the rural villages where they serve.   Much like our encounter with Sister Mary, we watch for signs to see where we’re meant to go next… if it is meant to be, it will be.

Another story I missed, although of comparatively less significance, was in reference to OD and occurred on our first night during dinner.  Again, as a reminder, OD is very animated.  He was telling us a story about his youth, growing up with Isaac, and as he talked about their exploits and some of the trouble they got into, he also talked about caning – and both of them were laughing about the lashings they got.  I snapped a quick picture and said that I would post it on social media.  His response, “Don’t forget to hashtag danger!”  Apparently that’s his thing.  He asks everyone if they, “are dangerous,” but it sounds much funner when you hear him.  Phonetically it’s more like dane-ja-rus with a rolling “r.”  It’s also usually followed up with “seriously.”  True to form, when we saw him
again a few days later, his first question was, “ah yoo dangerous?”  “Not as dangerous as you, OD.”  This guys a nut.  He’s married to an American from Utah who helped him pay for a car that he doesn’t know how to drive.  Seriously.