OK, I was wrong.  Andrea and Karen didn't fall asleep at 1am.  Apparently, they were still eating chocolate and talking at 3am.  How they found the strength to get up at 6am and then walk 5 miles with heavy packs is beyond me, but they did... smiling all the while.

It was the usual breakfast at the Guest House - a fried egg with toast & olio.  We brought some more essentials - Starbucks Blonde instant coffee, peanut butter, grape jelly, cream-of-wheat, granola bars.  The jelly and peanut butter were a hit, and I was thankful for the cream-of-wheat. 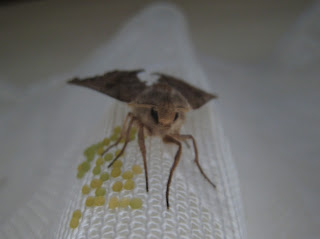 here's a roommate of ours

We said our goodbyes to Betti and started on the road around 7:30am.  We passed by the small daycare outside the guest house.  There were only about 7-8 children there, but they were still curious about us, although a bit more subdued than usual - there's strength in numbers.  They stuck their little hands throughout the chicken wire that bordered two sides of the area where they played to shake our hands, although it was more likely that they just wanted to touch our skin.  They called to us as soon as they saw us, "How ahhh you?  I am fine."  They put a lot of emphasis on the "you" so you can't help but smile when you hear it.  We would continue to hear from everyone we passed on our walk who was under the age of ten.

We walked through the gate of the university, crossed Busia Road and reentered the campus on the other side.  Sariba is the town across the street from the university, but the busiest part of the town is closer to the southern gate.  We passed by the piki piki drivers (motorcycles used to shuttle people between two points), and continued walking past the different areas of the university.  We finally came upon 4 story dormitory.  This was located right at the point where we leave the university through a narrow gate.  Girls were outside doing laundry in a basin before hanging the clothes to dry and climbing back up the four flights to get to their rooms.  The stairs were more of what we would consider a fire escape; external and made of metal, but this was a winding staircase... all four stories worth.  We pondered what college students back in the US would think of this set up, and then made our way to the gate.

Once through, we were in a town similar to Sariba, although I don't recall the name.  The women are sitting in front of their small huts selling their wares - everything from peanuts to mandazis to bananas.  Corn is cooked on the cob over an open flame, and sold the same way.  I said, "Oyaorhei" (pronounced Oh-yah-oh-ray, and it means "good morning") as I came through the gate.  The older women love to hear you speak Luo.  They are the predominant tribe in this area, and it means a lot to them that you try to speak their language, and not just kiswahili.  I know just enough Luo to get me into trouble.  They respond in kind, then I ask how they are, "Idhi Nahdi?" (ee-dee-nah-dee)  "Adhi amber!" they'd shout (ah-dee may-bear... with a rolling r at the end).  Then we'd all smile and laugh as they continued to speak Luo, and we would continue to walk.

It was a warm day, but not too bad... probably in the high 70s by the time we made it half way.  Andrea and Karen would stop periodically to say hi to children who would come running out of their homes to say hello.  They'd both squat down so as not to scare them, then wait until the children would come closer.  Many hands were shaken, and many smiles were shared.  The group slowly broke up into smaller clusters simply because some walked faster than others and we ended up stopping more frequently.  Despite the distance between the groups, you could still hear conversation going on between everyone.  Yes, the younger ones were further in front.  Nancy and Dave were practicing their kiswahili, saying "Habari" to everyone!  Richie was joining in with Ann and Karen saying hi to the younger ones... he's a big dude, so he squatted down, too.  Ryan was quickly embracing all things Kenyan... trying to speak as much Kiswahili as possible, and speaking it confidently.  Sue was speaking her share, too.  DJ and Holly, who had been to Kenya 6 years ago, seemed to be enjoying their return.

School was not in session, so our goal was to break ground on the living quarters for the dr/nurse that would be living there and working at the clinic.  It gave us an opportunity to quietly enter the school and the clinic grounds without too much attention.  It also gave us a chance to visit Jim's memorial without the usual grandiose exercise that accompanies such visits.  First we crossed paths with Mama Helen who lives a few hundred yards from the school.  Famous for her peanuts as much as she is for talking in the 3rd person.  "Mama Helen welcomes you. Aye!" she'd say shaking her hands in the air... I'd probably equate it to sparkle fingers.  Hugs for everyone.  We then moved closer to the school  where Job was waiting.  Samuel, who lived directly across from the courtyard was up working on the duplex with the fundis, so we dropped our packs and rested a spell.  John Ogungo, chairman of the Clinic Committee,  came through the space between the primary classrooms to greet us.  I re-introduced Andrea and the girls, then went around to everyone else - something that I failed to do with Mama Helen.  Nancy's introduction almost startled him.  He stopped and looked into her eyes and sat motionless for a moment.  He was very pleased to greet her.  Andrea pulled me aside and suggested that the family be given the opportunity to visit the memorial alone before everyone else came along.  That was a good idea.  Nancy thought so, too.  I walked them over to the memorial that was made, and John had tagged along.  By then, Samuel had also joined us giving everyone strong hugs before we walked away from the group.  John began talking at the site, as Kenyans do, so I let him go for a couple minutes before I called him and Samuel away.  I explained that Jim's family wanted some time alone, and they understood.  We walked back to where the other were sitting.  They'd been joined by some children who lived nearby and saw us there.  We stayed and talked with Sam and John.  Nancy, Dave, DJ and Holly emerged from behind the school after awhile.  It was then that we began our walk up the hill to the clinic.

The fundis (laborers) were digging out the are for the duplex.  We would later learn how hard the soil was! The entire Clinic Committee was there, so we had a brief meeting.  John promised me that he wouldn't talk much, and by Kenyan standards, he didn't.  I was grateful.  He introduced everyone on the committee one at a time, and then spoke for a short time; welcoming the group and giving thanks.  He then called on me to  introduce everyone in the group, which I did.  Then I gave my thanks to the committee.  They've been working incredibly well together, functioning as they are supposed to function.  They are sharing ideas and have really taken ownership of the project.  Everyone on the committee has a voice, as opposed to one person making all the decisions and keeping everyone else out of the loop.

We wandered the grounds for a little more while we waited for our "van/matatu" to come get us.  He was late.  Karibu Kenya.  Eventually he made it and we all piled in and headed for Kisumu.  We only had to get out once to push.  There's a steep hill with a lot of small rocks, and well, there was no way we were getting up that hill in this van with these tires.  Everyone got out, and the guys got behind the van to push.  I warned everyone to be careful (as the van slides backwards before it goes forward).  The push worked, and only DJ took a small tumble, but it was enough to tear the pants he wore.  Another story to add to the pile!  We then proceeded to the Kiboko Bay for lunch.  It turned out to be a late lunch.  But it was delicious.  We then loaded back into the matutu for the short ride to the market. 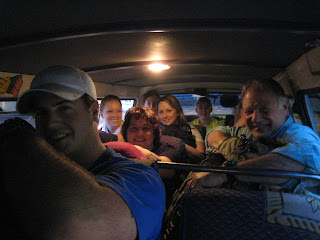 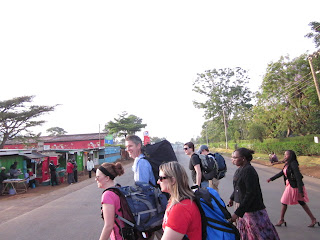 We then headed over to the Masai Market to buy chachkees (not sure I spelled that right).  Stone and wood carvings, paintings, jewelry, bowls, chess sets... they have it all!  Beatrice runs the second shop on the right, and she's always been pretty fair, so I led the group to her.  For the most part, each little shop has certain items that are available at every other shop.  You really have to look to see what items are different. They begin calling you into their little store (they're about 5' wide) and asking you to buy something.  It can be a real pain sometimes; especially if you can't say, "no."  Everyone emerged unscathed with bags of things to bring back to the states.

From there, we headed over to Nakumat Mega City - the equivalent of WalMart in Kenya.  We grabbed some extra water, I grabbed some cell minutes (as well as asking what I needed to do to fix my modem), and everyone basically looked around to see what the store had to offer.

We once again loaded everyone in the matatu and headed back to Maseno.

Dinner was peanut butter and jelly for those who were hungry.  Everybody was pretty tired, so most just went to their rooms.

I tried my best at trying to get the internet connection to work, but it would still be another day before I figured it out.  Tomorrow we walk back to the school.  The children will be there this time.  We're all looking forward to it. 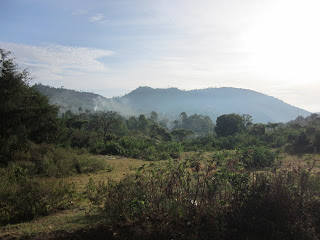 Posted by Adam Jablonski at 1:47 AM