First, I think I must apologize profusely for not posting these while we were still in Kenya.  We started off with problems connecting to the internet, and finished off with fatigue that prevented me from accomplishing anything.  I would begin to type, and wake up to find that my finger was pressed on a single key, resulting in 5 pages of the letter “i.”  It was quite frustrating for us, and disappointing for those of you back home eagerly awaiting stories about not only everyone’s day-to-day activities, but quite simply, everyone’s safety.  By now you know that everyone returned home safe and sound… although delayed.  I assure you that I had nothing to do with that part of the trip.
I guess that means that this blog will be something like a Terrentino/Pulp Fiction layout… we’ll start toward the end first, then move to the beginning before finishing up with the last day in Kenya and our flights back to the US.
The return home from Masai Mara worked out well.  We had 14 travelers and chartered a flight for 13.  That meant that I would leave 45 minutes ahead of everyone else to assure that I was at Wilson Airport before they arrived.  We all left Entumoto at the same time (9am) and headed for the dirt strip at Keekorok.  The 45-minute ride went quickly, and was filled with engaging conversation with Dennis our driver.  We spent the day before with Isaac, so we switched with the other group today.  Andrea, Katie, Karen, Richie, Sue & Ryan and John were in the car with me.  We talked about Kenyan’s view of Tanzania and visa-versa (more on that later, or earlier, depending on your point of view).
We got to the landing strip at 9:45am, and the plane arrived 15 minutes early at 10am.  We took off shortly thereafter… unfortunately, by the time Holly asked for a group picture, it was too late.  I had said my goodbyes to Isaac, hugged everybody, and gave Andrea a kiss.  “I’ll be there when you land,” I said.  As the plane turned around to prepare to take off, they were on the side opposite my seat.  Despite my best efforts, I couldn’t get one last glimpse of Ann and the children before the plane lurched into the air in a rapid ascent.  There were two more stops before I would reach Wilson Airport in Nairobi.  Ann and the rest of the group were leaving 45 minutes behind me. 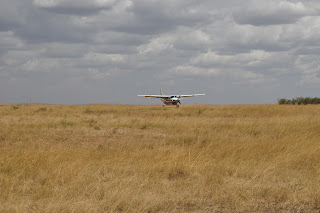 Now, let’s get back to the beginning…
Posted by Adam Jablonski at 12:54 PM