We left at 6:15… Father Ed was sleeping soundly, or at least that’s what we hoped. We went to his tent to check on him, but after several unanswered calls, we assumed he was still sleeping. Tamye wasn’t feeling well, so she decided to skip the game drive this morning, too. 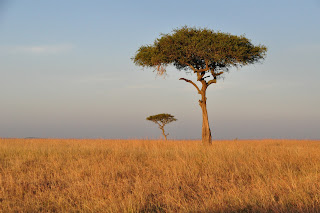 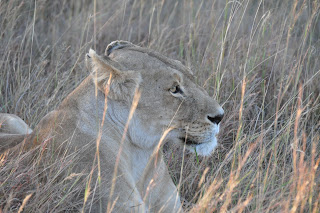 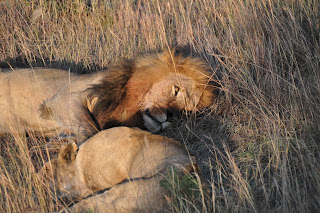 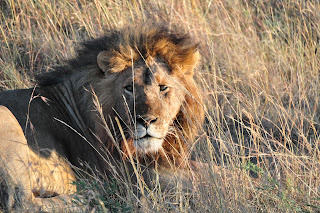 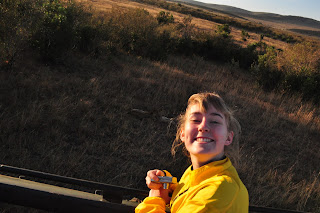 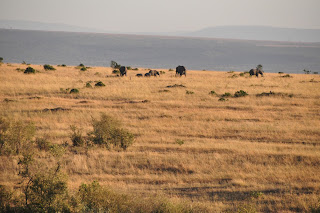 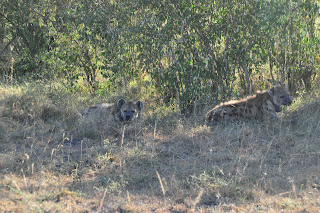 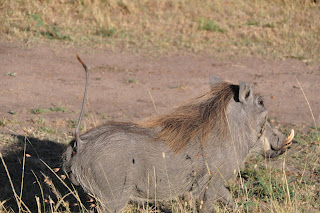 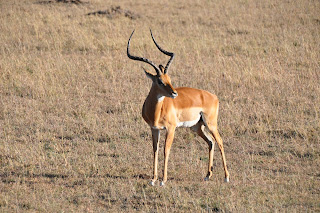 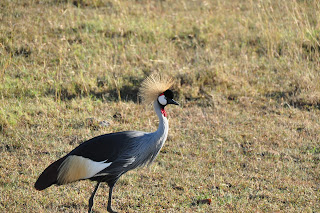 We set out for the hippo pool, which Kevin wouldn’t have missed for the world. The hippo’s his favorite animal, and he was eager to see one up close. He saw a lot more than just one! As we journeyed out, we passed by hyenas and more buffalo. Elephants marched in the distance, and giraffes were picking leaves off of the tall trees. We drop past herds of gazelle and antelope, and finally arrived at the hippo pool. 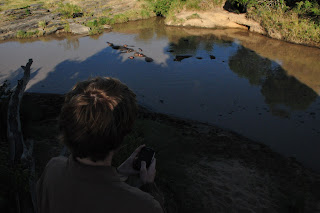 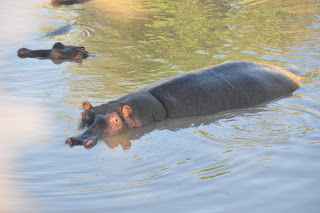 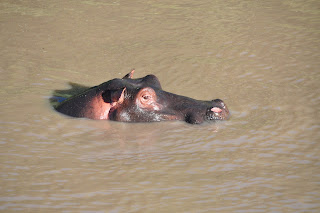 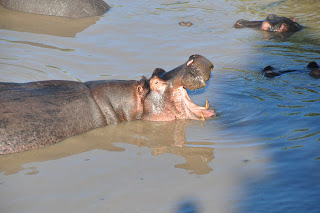 As I said, he saw more than one. They were absolutely enormous. There were some baby calves and larger bulls. They didn’t look so big as when they were mostly submerged with just their eyes and ears showing, but on several occasions, they rose high out of the water, and you could see how immense these animals were. Kevin reveled in it. We stood on a fallen tree to get a better look at them. It was perched above what looked like a small beach that the hippos might come to and rest in the shade. Kevin asked Isaac what would happen if he jumped onto the beach. “In less than 2 minutes, you’d have hippos at your feet, and they would not be happy.” Kevin stayed on the log.

Other people joined us, and soon after, one of the individuals jumped onto the shore. Sure enough, next thing we knew, there were 3 hippos about 3’ from the water’s edge. It took a lot less than 2 minutes. Isaac quickly told him to get back up onto the log. He obliged, and after a few minutes, the hippos returned to the deeper water.

After lots of pictures, it was time to head back. As we passed by a small plant, Isaac said, “This is a morning glory.” Jim’s voice echoed in my head. When we would arrive at Mbaka Oromo, Jim’s first order of business would be to go to the 1st graders and sing “Good morning morning glory, chased by the dew. Good morning, morning glory. God morning, good morning to you!”

I silently sat in the jeep for the ride back.


We got back, and cleaned up. The plane from Keekorok wasn’t leaving until 4pm, so we had some time to kill. We gathered in a sitting area away from the restaurant that overlooked the pool area and the courtyard. There was a bar nearby that kept us all from getting thirsty. We sat and told stories about our favorite parts of the trip so far. Isaac joined us, and Andrea and I brought out the gifts we brought for him. He was happy for the fleece and the blanket. We also brought him one of my Building Futures Inc., golf shirts. We added gift, however. Andrea had given Jim a Building Futures embroidered jacket. It was a prized possession of his, and spoke about it often. It was among his things that we retrieved from the embassy. Isaac was the first guide to ever show Jim around Masai Mara. He was 5 years younger then, and a new guide. He had older brothers, Andrew and Daniel, who were much more seasoned, but Jim chose Isaac. He’s been choosing him ever since. Everyone he sent to the mara, he insisted that they use Isaac. Isaac had a special bond with Jim, as did all of us. He believed in Isaac, and Isaac knew it. He’s now very well known on the Mara, and knows all the trails like the back of his hand. Andrea and I decided to give Isaac Jim’s jacket. He stood up and put it on immediately. Tears filled his eyes and rolled down his cheeks. Isaac said some words about Jim… how he was like a father to him. How he looked out for him. How we should keep him alive within all of us. The tears continued, despite his best efforts to the contrary.


Just then, something pretty amazing happened. Although we haven’t seen a bee since we’ve been here, a solitary bee joined our party, and landed on the lip of a soda bottle. Ed pointed it out, and I said, “Oh, that’s a honey bee.” Andrea simply said, “Jim.” I can’t tell you what I was feeling at the time… all I could think was “wow!” You see, Jim was also a beekeeper.

I knew he’s been with us through this entire trip, and if the morning glories weren’t enough, that bee was certainly was.

After some more stories about Jim, Isaac informed us that some friends here in Fairport were bringing him to the US for a visit in the summer. We were so excited to hear the news, that we almost came out of our seats.

Now we look forward to July to once again be reminded of our days at Masai Mara.

We left for Keekorok at 2:30, and looked for more animals as we drove. We had additional time at the landing strip to take some pictures with Isaac and Andrew. The plane arrived. We loaded the bags and headed back to Nairobi, waving to Isaac as the plane lifted into the sky. 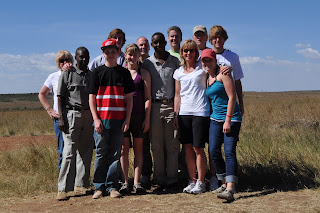 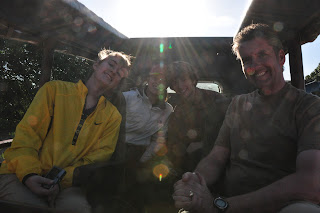 Posted by Adam Jablonski at 1:25 AM