Well, he did... in record time. The first time I climbed that hill, John O'Gungo took me, and we traversed back and forth until we reached the peak. My second time, Samuel brought me. We travelled straight up... no stopping, no waiting, no hesitation. He did the same today. 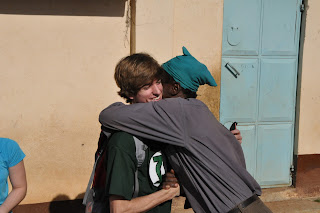 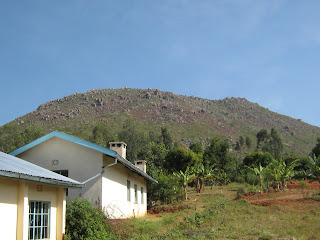 Tamye, Harriett and I stayed behind. Although I was trying to upload pictures onto the blog (unsuccessfully), I would periodically look up to see where they were. We finally spotted them about 30 minutes into their climb. They were crusing, getting 1/2 way in a very short period of time. I cupped my hands to my mouth and let out an "IIIIIIIYEEEEEE!" It echoed through the entire valley, and was met with similar sounds from the hill. Tamye and I laughed as children in the valley responded with similar yells. 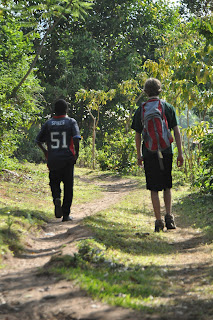 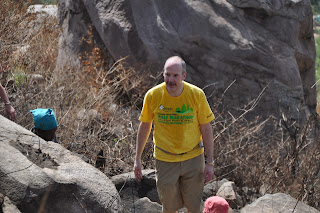 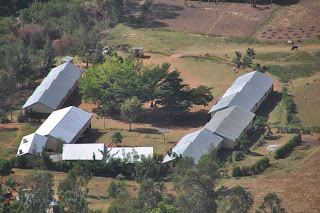 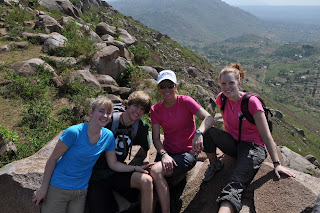 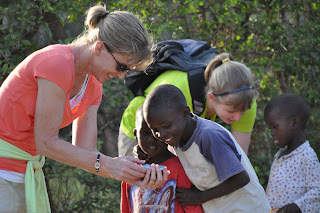 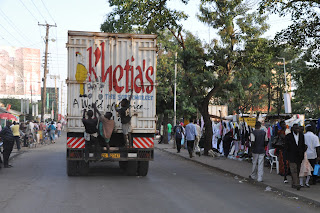 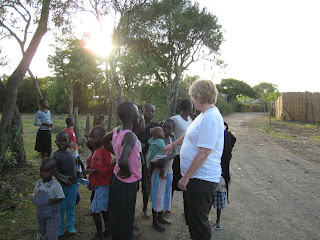 Originally, The Sunday plan consisted of driving to St. Theresa's for mass, then going to the open market, having lunch at Mamba's, going to the Masai Market, then Nakumat for clothing for Kevin (we still haven't found his luggage). We did two of the above, but everything changed.
We decided to go to Mbaka Oromo first. Most of the group wanted to climb the hill behind the school, and Samuel offered to take them up.


30 minutes later, they were at the top, standing on stones 6x their size. I can't wait to see the photos they took. It didn't seem to take as long for them to from behind a classroom block. Samuel and our driver George, who also made the trek, looked fresh as a daisy. It's important to note that Samuel wore flipflops, and George wore long corduroy pants. The rest of the group looked pretty rough. Most had scratches on their legs and arms. Father Ed looked like he lost a long battle with a rose bush. The sun was already pretty high, so it had to be close to 88 or 90 degrees. Despite all that, they said they enjoyed it. They drank most of the water that we carried in our packs, and Andrea, Rich and Kevin decided to run back to the main road... another 5 miles. I tried to stop them, but I had no luck. They soon disappeared behind a hedge row. We told them we'd follow 15 minutes later. Between the time they left and we set out, William Kabis arrived with sodas and cold water. He said he met the runners, and gave them cold water before continuing on the piki piki (motorcylce) to the school. We drank quickly while the remaing climbers cleaned themselves up. There were many fires set on the hill recently, so there was ash and soot everywhere. Judging by the way they looked, it would seem that they brought most of it down with them.
Despite Williams pleas, we set out to get them. I had forgotten, though, that there were spots where the road was so bad that it would have been faster to walk. We were hoping to get to them after about 2 miles, but they were finished 10 minutes before we got to the main road. They were tired, and hot and thirsty. They hopped in the matatu and 15 minutes later everyone was in the Guest House showering.
While the original plan was to have Fr Ed say mass at the bottom of the hill, the fatigue and dirt prevented it, so after everyone was cleaned up, we found a shady area behind the guest house where the breeze blew gently to keep us cool. A large 20 gallon water bucket turned upside down and covered with a towel served as the altar, and some sangria we bought the night before served it's purpose too. While we went through the readings, the leaves were rustling in the breezes, birds were calling to one another and were repeatedly being interupted by roosters. It was another nice and peaceful ceremony.
After that we got back in the van and headed to Kiboko Bay for an early dinner. It''s a spot I haven't been to in years, but the fond memory of Jim and I eating banana splits after 10 grueling days of work was wonderful. The group had everything from vegetable lasagna to chicken marsala. We continued to joke with one another and tell stories. Rich laughed at my jokes, and I laughed at his. I wish I could say it was because we were the only ones that got the joke. Sadly, it's because we were sometimes the only ones that thought it was funny. We laughed a lot, though, and they are new memories that I think we will hold dearly.
From there we went to the Masai Market where we purchased necklaces, soapstone animal carvings, rosewood carvings, banana leaf paintings and more. The shop owners love to haggle... they really do. I've watch Jim joke with them and get them to lower their prices in half. His spirit was with me today, because I had a blast! I was speaking kiswahili with them, and joking... getting them to laugh. It was marvelous. The best part was that the group looked at me the same way I looked at Jim the first time he took me there. Again, precious memories.
We stopped in the Nakumat to get Kevin some clothes... he insisted on a couple of traditional kenyan shirts... we insisted on clean underwear and socks. It was a draw.
Most of us slept on the way back... despite the bumps in the road.
We're off to Mbaka Oromo tomorrow to play baseball, then it's a stop at Huma Girls Secondary School to drop off some softball wearables.
The last thing we heard today was that there's a water shortage. Again, memories of Jim and I going through the same things came flooding back. We'll make do... nobody seemed to be too concerned. That may all change tomorrow at 6am when they have to shower... stay tuned.
Lala salama! 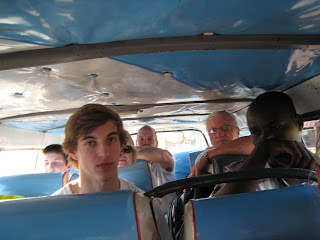 I am so happy that Katie is with you. The photo of Andrea with the smile on her face is a gift!! Thank you, Adam for the blog. XO to you all.