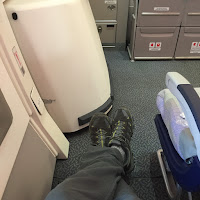 I had some surprises on the journey today.  The first one was very nice!  I asked for an exit row for  y flight to Dubai (Emirates has always fulfilled this request, and today was no different) and actually got a window this time, despite my asking for an aisle.  I rather enjoyed it.  It actually wasn't even an exit row - instead, it was the row behind the exit row with vacant space in front of it - perfect for stretching my chicken legs.  It was also the first time I was able to continually look out at the horizon and see the clouds change as we crossed the Atlantic; the gradual darkening of the sky as the sun set and the subsequent explosion of light as the sun rose again.

The cloud formations changed each time I would raise the shade.  The sky started clear as we made our ascent.  Soon, small billowing puffs of cotton began to appear. Next it looked like Antarctica... I would have sworn that it looked like a frozen, barren wasteland.  In my defense, it was -49ºC outside.  The next time the shade went up, it looked like my attic - spray insulation!  As the sun began to set, oranges and reds started to invade the edges of the horizon.  I'd hoped that they would continue to expand, turning the sea of clouds into a lake of fire but no such luck - they kept their distance yet remained visible as the stars began to appear against the dark blue velvet sky.  Then, darkness.  Despite the changes, and obvious evening, I wasn't able to sleep at all.  I tried several times but it wasn't meant to be. 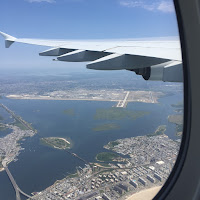 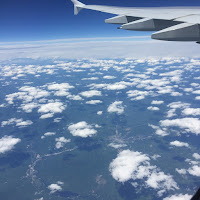 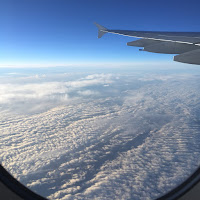 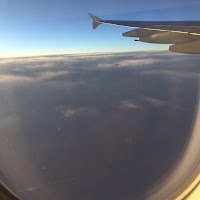 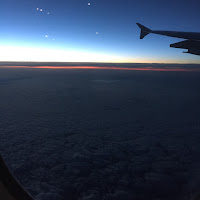 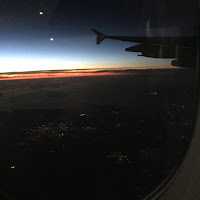 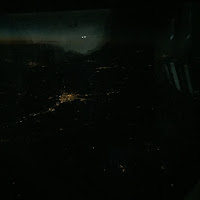 Because I couldn't sleep, I multitasked - I watched movies while playing a game on my phone.  Don't judge.  I also mixed in some music before the insanity of all the stimuli began to make my brain itch. Note to self: 1.  when using a q-tip, stop when you feel resistance.  and 2. you really can't itch your brain.  Pearls of wisdom... you're welcome.

I kept thinking how Andrea would love to see these images (the pictures don't do them justice).  Now i'm realizing that she's usually the one with the window seat!  She's seen them all along!  Sometimes I'm a dope.  I truly believe that it's attached to the y chromosome.
The next time I peaked out the window, the sun was waiting to burst.  A couple more variations clouds pretending to be land and the next thing I knew we were on our descent into Dubai. 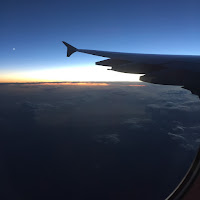 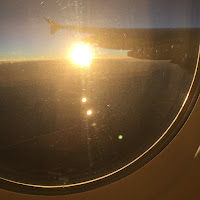 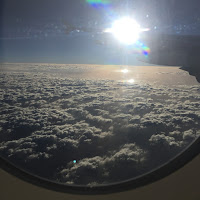 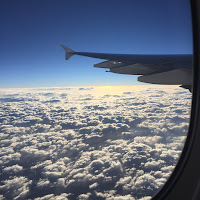 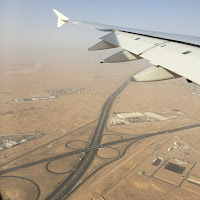 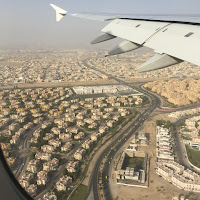 Normally, this is where I tell you a horror story about waiting for a bus to pick us up off the steaming tarmac to take us to the terminal.  Not today!  Surprise #2 We actually walked down a jetway into the terminal.  The jetways are glass so that you can see the monstrosities that defy the laws of gravity before you board them.  They also serve as a nice incubator.  It was 94ºF outside, so behind the glass it was even hotter.  Now I know how Icarus felt.  I sidestepped past a group of ladies dressed in burkas and walked into the beautiful Dubais International Airport.
Again, as customary, I make my way to a service desk (although they can give me an exit row in JFK, they can't help me with the connecting flight) to see about changing my seat.  Surprise #3!  They gave me an exit row and it was completely empty!  Bonus!
It didn't last.  A young couple came and took the seats before we even took off.  It was fine, though, because although I wasn't able to sleep on the first leg, this portion of the trip had something else in mind.  I think it's safe to say that I was snoring.  I kept waking up when my head would fall forward and jolt me out of REM.  Remember that y chromosome I reference earlier.  Yeah, well, if you told your seat back, it prevents your head from falling forward.  I find solace knowing that I'm not the only man suffering from this affliction.  Yes, you know who you are.
We landed in Nairobi under very cloudy skies and 70º temps.  It's winter.  The baggage area/customs and immigration building was moved yet again.  This time, it was a newer, but still temporary structure.  This one, however, did not make you feel like the walls were closing in on you while you waited your turn.  High ceilings and bright white lights worked well with the white marble-ish linoleum floors.  Much better that the old one where the brown rugs and yellow lights made the entire room look like it was dipped in honey.  Immigration was a breeze, baggage claim was a bit nerve racking.  It took over 45 minutes for my bags to come out.  Regardless, they made it and I headed outside to find Isaac waving his hands in the air from behind a huge crowd of taxi drivers and strangers.  A big hug followed along with he customary updates on both our families.  I talked with Andrea and Karen while I waited for Isaac to bring the car around.  It's still a bit of a logistical nightmare (ever since the fire several years ago), and I can only imaging when they're going to be done with the construction.  Either way, you just go with it.
Isaac came by with a small white car which we loaded with my 3 large bags and we headed out.  It was already past 4pm, and I am not at all interested in driving at night, so we opted to head to the Royale Hotel to get some dinner and a good night's rest.  Rather than resting before dinner, I decided to get the first day's blog out of the way.  I guess that makes it Surprise #4.
We'll see if I can add anything to this after dinner.  My guess is that tomorrow's bog will start with tonights dinner.  Nimechoka sana ( nee -may-choke-ah sana - I'm very tired).  This is probably a bad time to mention this, but my Ciprofloxacin is on my dresser at home.  Those are the high-test anti biotics that I take in the event I contract some nasty bug.  Pray that I don't contract a nasty bug.  I'll get some drugs at the clinic tomorrow.
Here's a picture of my digs at the Royale. 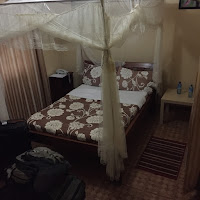 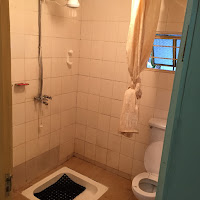 Posted by Adam Jablonski at 6:25 PM