I woke up out of a sound sleep, looked at my watch and saw 6:50am and thought I was missed my alarm!  I jumped up, turned on the light, walked into the bathroom and saw abject darkness through the window.  It's 6:50 in the US.  It's 1:50 here.  Ugh.  I climbed back into bed and tossed and turned; I have no idea when my slumber began, but it didn't last much longer than a couple hours. That same rooster from Chulembo must have followed me here - he started crowing at 4:30am.  Katie's right - if I find him, I'll fry him.

We had a lot to do today before we had to leave for Narok.  I originally had us leaving Maseno on Sunday, but my illness forced me to call an audible.

Our first stop today was back at Agulu.  The shirts that were donated by Julia Nunes (technically I got them from her father, but they were from her) were destined for this school.  We arrived to find an assembly already in progress, and while the deputy was addressing the students, Margaret, the headmistress, came out to say hello.  The government was there building a new two-classroom block for her students.  It was a testament to her, her staff, the parents and definitely the students.  We talked about the shirts and how best to utilize them.  Ultimately, we decided to choose the best performing 3 students from each grade level.  3 grades were taking exams and could not be disturbed, but we had fun with the remainder.  They loved the shirts and were happy (and proud) to put the on display for the entire student body.
We then sat and talked for a bit with Margaret before departing.  While sitting in the administration office, I pointed out to Job and Isaac that the teachers are in the building that’s in the worst shape!  Unlike some other schools in the region, these teachers put their students first.  The new classrooms are beautiful and could be easily converted into a new office.  Instead, they reside in the most dilapidated building and make sure the students education the top priority.  They’re truly a remarkable bunch. 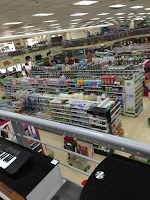 Now it was time to head back to Kisumu to find the store that sells elastic and velcro for the pad projects - those were the items I left behind.  Would you believe that I also went back to the Masai Market!  We first found the shop with the items we were looking for, then headed quickly to the market.  I owed John (the other John) some money from the day before.  He let me walk off with a beautiful soapstone carving for Katie, but took the last 750ksh I had left (kph is "Kenyan Shillings").  The piece was easily 3,500ksh.  He simply said, "Pay me the rest when you come back."  It is painfully obvious that I spend too much time here... but it is so much fun!  I can't help myself!  I saw John, and paid him his money, then went to another shop (that was closed yesterday) for something for Karen.  I stopped by and saw Edward, and bought one more small painting as well as some zebra bowls for a friend,  I then snuck over to see Elizabeth (she's the one that always says, "Oh, my God") one last time to say goodbye.  They all stood outside their shops and waved as we departed.  Next was Tusky's.  Again, this is a big store and not something you'd associate with Kenya.  I took a picture from the second floor where the furniture and appliances are.  Then went downstairs to look for a space heater.  Most were gas operated, which would not be a good idea, and the only one that wasn't looked like it would fall apart inside the box if we picked it up.  It wasn't nearly big enough.  We'll have to add this to the list for the next trip.
On the drive back I still had Susan and Emmah on my mind.  These were some very special young girls that occupy spaces in the hearts of Ann and Karen.  On the way down to Kisumu, Job said that he didn't think we'd have time to see them.  If we wanted to get to Narok before nightfall, we would have to leave by 3.  "I am sorry sah, we do not have run out of time," he said.  I looked down at my watch as we driving back to the Peacock.
"Job, it's only 1:30," I said.
"Yes.  You can rest for 30 minutes before we push off."
"Is there a back way to get to Susan's house?" I continued.  If we take the normal route, it would gobble up at least an hour for the formalizes at Mbaka Oromo.  It was an hour I didn't have.
"Yes, sah.  We can entah through the back."
"Job, we're going to see Susan and Emmah."
And so we did.
Isaac drove as far as he could.  The winding dirt road was in terrible shape and he had to stop because the path was getting too narrow to accommodate the car.  We walked the rest of the way which was nice.  We've travelled so much this trip that this was the first opportunity I had to walk.  It's a narrow maze of paths than run along the borders of everyone's property.  You get to see dozens and dozens of families when you travel this way.  As you walk by and wave, they call to you to say hello and are more than happy to take the time to chat.  This time, we were on a mission, though, so they had to settle for waving hands and big smiles.  We bought some food supplies for the family that Job was going to take after we left.  He was now carrying the bag as he walked ahead of me.  We stopped at the corner of their property and surprised them.  It's customary to call before showing up, but nobody was answering their cell phone.  We' requested permission to enter the property before continuing to the house.  It was very similar to asking the captain of the ship if you could "come aboard." 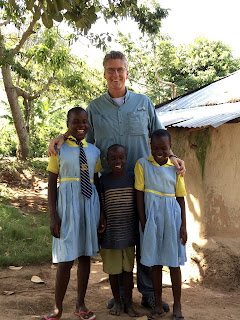 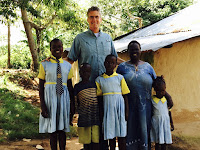 with a big smile.  Danton soon followed as their mother sent someone to fetch Susan from the schoolyard.  Although the news would travel, it's better that we see them this way rather than walking by the school first.  They often get badly teased about their relationship with my family.  I snapped a quick selfie with Emmah before susan arrived.  We walked into their home to sit and chat for a short while.  Esther said a short prayer before asking about Ann and Karen... then Kevin... then Katie.  The girls said they were doing well in school and gave us an update.  The time had passed quickly and we were forced to decline the sodas and bananas they wanted to serve us.  We went outside for a few more pictures before heading back.  Susan is growing quickly and her personality is starting to become more vocalized.  When we walked outside she looked at me and said, "You ah so tall!" with a big smile as she looked up at me.  It was if I was on 5"5" yesterday.  I said, "I have always been tall, it just took you this long to say it out loud." I rubbed the back of her head as we talked, and rested it on her shoulder for the pictures of the family.  We said our goodbyes and headed back to the maze.  Which, coincidentally, is surrounded by maize.  God I'm corny.  That actually made me chuckle. 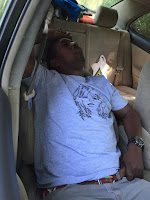 We came back to the car to find Isaac sound asleep.  We called his name, but no response.  I posted a picture of Job sleeping, so turnabout's fair play.  We made it back to the Peacock by 2:15, said our goodbye's to Job, and after a small plate of fries, we began our trip to Narok.
The trip was marred with me trying not to fall asleep and me trying to take pictures as we drove.  the sun had begun to set but it was behind us.  I had to roll the window behind Isaac down and blindly hold the camera outside to try and take a picture.  It was a winding road, so it took another 45 minutes before it actually appeared out my window.  At 6:45 Isaac estimated that we would be in Narok in "about 15 minutes."  This is why you can't nail down a Kenyan on a time.  We arrived in Narok promptly at 8:15.
I've checked into a new hotel that's more similar to the Peacock just to get a change of pace (and to avoid the praying from the mosque near the hotel where I would normally stay).  The power went out 30 minutes after I arrived, and my computer died soon thereafter.
It's 6am now and time to get ready.  I'll try uploading the pictures while I clean myself up.  If I'm lucky, I'll get this posted before we leave at 7am for our first set of meetings at Masai Mara.  Wish me luck!  I realize by the time you read this it will be too late, so I'll save any well-wishes for later.
Posted by Adam Jablonski at 7:24 AM