Well, we arrived! Finally! The trip started off pretty well... then we took off from JFK to Dubai. I never knew Katie got motion sickness, and I don't know if it could have been anything else. Katie doesn't handle nausea very well. There's usually very little (or insufficient) warning, followed by projectile vomiting. Sorry for the visual, but that's what this blog's all about. Thankfully, after a couple of trips to the restroom, she got it out of her system. Her headache started to subside, and the nausea passed. Then Katie began to show through.

It was this trip that I noticed that Katie has adopted many of Andrea’s facial expressions; and I love each one. No, really. We were about 3 hours into what turned out to be a 13 ½ hour flight, when she leaned over and said, “I wonder if I got my headache because I can only hear sound through one of the earpieces.” I said, “Oh. All you have to do is slowly pull out the jack until you hear the other earpiece turn on.” That’s when I got the first “look” of the trip. It was the, “You couldn’t have told me this 2 hours ago?” look. It was a perfectly blank stare with a bit of hostility behind the eyes. Priceless.

She slept much of that first leg, and we were both glad for that. She was much more chatty toward the end of the flight. There was a cute little Persian boy who insisted on doing whatever he wanted, despite his mother’s mild protesting. At one point he was wandering around with a small stuffed bear. It made Katie think of her stuffed bear, Mr. Bear, that she had since she was an infant. She recalled the story of how it got lost in Ireland 2 months ago. It actually made her a llittle sad. I said, “Maybe some little girl found him, and now Mr. Bear is making her happy.”Without skipping a beat, and completely dead-panned, she said. “Nope. He’s in the bottom of a dumpster somewhere.”

The flight took longer than expected due to the ash from the volcano in Iceland, so we only had an hour to wander around the Dubai airport. I took her to a sports store where they had some cool rugby shirts the last time I came through. We found a Kenya Rugby shirt that also said “Dubai Rugby” on it. She liked that one best.

We walked a little more, checking out the Starbucks and the other restaurants ant this particular end of the terminal. We slumped into the seats in the waiting area, and fatigue started catching up with me. It was my turn to sleep from Dubai to Nairobi. I’m sure my mouth was wide open, and I was snoring to beat the band! Katie slept, too, on-and-off between knitting and reading. As we left the plane, and were walking down through the terminal, she looked at me with a big rosy cheeked smile and said, “I’m in Kenya.” It’s wonderful to see that excitement in her eyes. She’s really excited about this trip, and I’m sure she’ll make the most of every single day.

Getting through customs was incredibly fast this time, and our bags came out in a timely fashion, too. Katie was able to watch a couple of dogs walking all over the luggage as it was put onto the belts. A springer spaniel and a golden lab were the bomb sniffing dogs today. Katie’s only comment about the baggage handlers was, “It’s a good thing there’s nothing fragile in those bags.”

We got our bags and proceeded to head outside. For the first time ever, a customs agent stopped us to look at our bags and papers. After explainging who we were, and what we did, he handed back our passports and said, “Thank you for coming to our country. And thank you for bringing your daughter to learn about us.” Nice.

Jim was waiting outside the doors with a small hand made sign that read, “Tallman and rugby girl.” He’s such a character. We grabbed all our luggage, and proceeded to the domestic terminal across the street. When we got to the entrance, Harriett Shinalli came up to greet us. She’s one of the women (along with her cousin Noel) who are helping with the ground work here, making sure that everyone gets to where they need to be. She’ll meet the arriving faculty/nurses/friends tonight, and fly to Kisumu with them tomorrow. Katie and I will meet them all at the airport. They have a pretty good breakfast there, so that should work out well.

When we landed in Kisumu, there was no way that all of our luggage was going to fit in Jim’s car.Jim vollunteered to take the luggage to Maseno in a Taxi while Katie, Steve and me went to the local Nakumat to get some new sim cards for our phones/modems. Steve Thompsen is Jessica Thompsens husband. They are the twenty-something couple who have been living in Maseno for the last several months. Jessica is an RN, and works closely with the Maseno University Mission Hospital. Steve is a Habitat for Humanity employee in the states… rather he was. While his wife was lucky enough to get a 7 month leave of absence to go to Kenya, Steve was not so lucky.“When we return to the states, I’m sure I’ll find something to do,” was his only remark. The ride back was interesting. The potholes can be anwhere from 6” to 16” deep, and they sometimes stretch across the entire road. This forces drives in both directions to constantly be moving back and forth between lanes to not furhter destroy their already horrible suspensions. The problem gets exacerbated when it gets dark. That’s when you mix cars with one headlight with motorcycles, bikes and pedestrians.

Although both of our headlights were working, neither of them were pointed to the ground, so while we had a clear view of the passing brush, the dilapitated road continued to be a mystery as we slowly kept moving forward. It took us twice as long as usual to get home, but we got there safely. It helped that I had pretty good halogen flashlight in my bag that I held above the roof to illuminate the road ahead of us. We tried calling home a couple of times, but there was no answer, so we left a message that we’d try later, and skype after everyone is home.

Steve and Jess invited us over for dinner, so after dropping off our packs and water at the guest house, we met up with Nancy and Mark Wilke (St. John Fisher faculty from the Wegmans School of Nursing – SJF). It took two trips to get everyone there, but we all made it. It was only 7 minutes away. Steve Thompsen is a lean smiling young man with brown hair and ice blue eyes, who seems to be comfortable in any situation. His wife Jessica has dark hair and brown eyes, and is eager to make everyone feel welcome and engaged. She quickly pointed out that the only portion of the meal that she made was the guacamole – it was quite good… not as good as Sam Slaughter’s from the last trip, but it was good (Sorry Jessica).

Dinner consisted of simosas (something akin to a filo stuffed with lentils), sakumawiki (kale), beans (beans), rice (rice) and pineapple (yeah, you get the picture). The food was good, and Katie enjoyed it. I’m not a big lentil fan, so I stuck with the rice and beans. Her favorite meal of the day, however, was the breakfast we were served from Dubai to Nairobi. Sausages that tasted like hotdogs, sliced ham, chicken pieces, diced potatoes and a fruit cup.

She learned that Nancy is a picky eater too, so they’ll each have some company in that regard.Nancy is very cautious about the food she eats, which will go further to help everyone avoid something that is easily avoidable. When the food and drink was spread out before us, she said, “OK. Is all this edible and drinkable by us?” Jess immediately responded with a pleasant smile, “Yes, it’s safe.” Dinner was accompanied with varied conversations from what our hobbies are to where we’ve been traveling, what we study, and, of course, the visiting nurses and the dispensary. Although it was a great and lively discussion, I was happy to return to the guest house by 9:30pm. As we walked toward the room, a millipede walked in front of her and got a reaction. “Ew! I hate wormy things.” This should be good fodder in the coming days. Upon entering the room, Katie immediately spotted a small gecko on the ceiling. She thought it was cool… until I told her that she’d hear them walking along the walls and ceiling because of their sticky feet. That, apparently, is not so cool. I got her situated in her bed, and pulled the mosquito net over her. She’s really just rolling with all of it. She rolled over to read her book, and was asleep within 5 minutes. We’re getting up at 6:30 tomorrow, so we should both het a good night’s sleep.

It’s 10:45pm now, and I’m exhausted. I’ll post this to the blog, then I’ll try to call one more time before throwing in the towel. Either way, I’ll wake up at 3am so I can skyp Andrea and the kids.Hopefully Katie will roll over long enough to say, “Hi!”

That will do for now. Love to all. 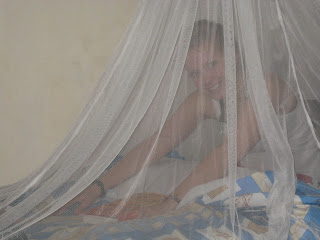 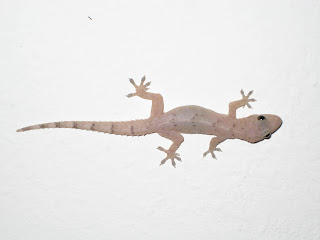 I just can't get enough of the Katie stories - priceless.Take care of that little angel. Could she look any cutier under that netting ????? Keep the info coming and make sure you include every detail about Katie !!!!!
maggie