I’ve never driven northwest from Nairobi.  We’ve gone in that direction, but it’s always been too long a drive (7 hours)  versus a $50, 45 minute flight.  That’s a no brainer.  This was a much shorter 3 hour drive along the opposite side of the Rift Valley.  It was spectacular.  The views are better than I expected, and the roads were in much better condition. This is apparently a route that fewer trucks/lorries are permitted to take, which helps with the speed as well as the second-hand diesel emissions. 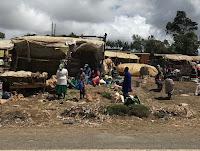 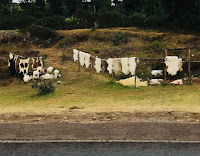 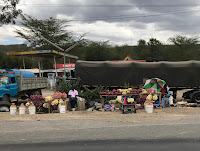 The landscape was beautiful and changed every few towns.  As we left Nairobi, there were people selling their wears in between cars in areas where the traffic slowed down.  Next came areas of thicker vegetation with a sight I’ve never seen before. The road was virtually curved out of a hillside, so its shoulder was up against a tall vertical wall of dirt or rock. In that small space were different retailers with the same items to sell.  Turkeys and ducks!  Yes, you heard me.  I’ve never seen such a thing.  The ducks were roaming free around a small stool or chair, and the turkeys were in an enclose further from the road.  They were also only on the left side of the road.  Weird.  As we made our way along the rift valley, we saw goat pelts and hats for sale!  Next came baboons in small groups that were eating various articles of garbage that a passer by tossed out a window.  That turned to larger areas of vegetation and small kiosks where farmers would sell their fruits and produce from pitched stands.  The colors and presentation were spectacular.
We stopped halfway through the journey to use the restroom.  There was a nice market attached to ta gast station, so Andrea suggested we get some apples.  This place was spectacular.  It was the equivalent of a US convenience store, but the majority of itemss for sale were fruits and vegetables, along with some drinks that were available from a clear door cooler.  It was just what the doctor ordered.  Andrea got the first one, but I was right on her heals.  I was happy to be biting into something that wasn’t fried.  Don’t get me wrong, I love me some fried foods, but in the back of my mind I know that I’ll be returning to a 5am workout regimen when we return.  We loaded back into the Land Rover and continued on. 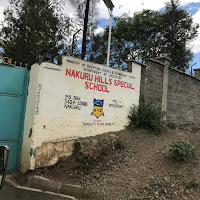 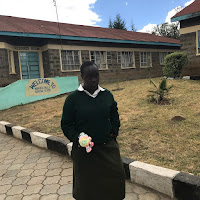 We stopped at the school first.  Nakuru Hills Special School is set just off the road; literally.  When we turned and stopped at the gate, I think our bumper may have still been on the road.  Isaac jumped out to open the gate.  As we drove, he informed us that the children won’t be at the school because of midterms. Yup, that meant that ALL the student in Kenya won’t be in class.  Yup, that meant that all the schools we’re visiting, you know, the ones where we panned on spending time with the kids, will have no kids to play with!  Most frustrating, but like everything else here, you really just have to roll with it.  Shucking and jiving is just comes with working in the third world. 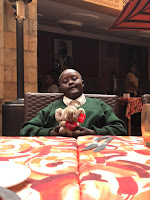 Sharon and Nasinkoi were back in there room waiting for us.  We had to fill out some paperwork before being allowed to leave with them.  That was good. Once that was out of the way, we met the girls and talked with them a bit before climbing back into the car. Nasinkoi has gotten much chattier. Actually, Karen said it much better – she’s is clearly more confident and that school is responsible for the forward progress.
With the exception of a few other students, everyone was gone.  These are the times when they are most homesick, because they lack the funds to drive back home for a week.  No worries, our timing couldn’t be better.  Although we can’t see the girls performing in their school, we can reunite them with their mothers and siblings.  It’s still a win. 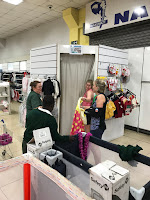 We then drove a short distance to the Waterbuck Hotel.  It’s beautiful, 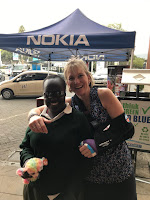 inside and out!  Before grabbing our luggage, we decided to grab a bite.  It was already 1:30 and everyone was hungry.  The food was delicious, too.  It was buffet style with literally dozens of things to choose from. The staff was wonderful, too.  Two women in particular were touched by Sharon and Nasinkoi and helped them with everything from describing the food choices to helping them plate items.  They also helped them back to their seats.  It was really nice to see such kindness toward them.  Both of them ate like pros.  Nasinkoi is a tiny thing, and when I saw the plate in front of her, I thought, “No way.”  I was wrong. It wasn’t a sprint for her, it was a marathon.  Her pace never slowed or quickened and she didn’t stop until the plate was empty, as was the bowl of soup.  Karen sat next to her and commented about how well the school was doing with them. They mimicked some of her behaviors, adding them to the things that they’d already learned.  When she finished I fully expected her to lean back and unbutton her waistband!  She leaned back in the chair like Archie Bunker, rubbed her tubby for a bit, then she interlocked her fingers behind her head with a heavy exhale as if to say, "Crushed it."  True dat. 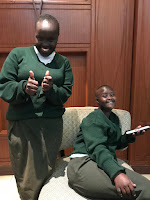 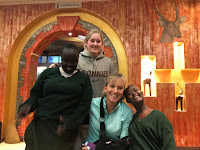 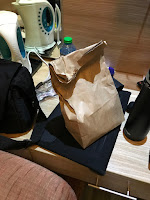 This next paragraph may want to be passed over by the faint of heart.  Sitting in front of Sharon’s now empty chair was the food that she never really touched.  Her chicken, vegetables and French fries were all intact on the plate… there was also a pool of vomit that was placed like some one added it with a squirt bottle. I know it sounds gross, but it’s the truth.  The only thing that made it even more funny was what happened next.  Karen commented that if this happened in the states, the staff would have said, “You’re on your own and the patrons would leave immediately.” Richard’s response was, “Oh, no, it’s just a normal thing here.”  He then asked a waiter to back up the contents of the plate so she could take it back to her room in case she got hungry later.  I shit you not.  I’m laughing again as I type this.  The fact that the stupid bag is sitting on the dresser in plain sight just beyond my computer screen as I type makes me smile even more.
When we came back to our rooms and talked about it with Ryan while Sue and Isaac checked in on Sharon and got Nasinkoi situated, Ryan made a similar comment about Nasinkoi’s focus.” He said it this way.  “She turned her head to look at Sharon like, “What the fu***? (insert pregnant pause) Wow, this is good chicken.”  If there was a thought bubble above her head, I bet that would be the contents.  I don’t know how to convey how nonchalant the comment would have been.  That just made us start to laugh all over again.  I was actually standing there with the bag in my hand.  Again, it just made it funnier.  As his mom came back I said, “Sue, would you like this?”  She said, “What is it?”  I said, “Sharon’s leftovers.”  Her reaction was priceless.  It was as funny as a half-hearted dry heave could be.  Yes, it was pretty funny.
Enough of the gross/funny stuff… although I’d be happy to give you more details if you see me. Everyone’s probably asleep except for me, and I plan on joining them as soon as I post this.  Although now that I think about it.  I may post yesterday’s blog now, then post today’s first thing tomorrow morning.  Otherwise, you get two days at once and that might be overload.  I don’t want to scare away my reader.  I’ll throw in some pictures tomorrow and get it posted.  If I go to sleep now, I can get 6 hours before the day starts anew.  We’re heading out on a safari near the lake at 6am before returning for breakfast then heading for Narok.  See you tomorrow!
Posted by Adam Jablonski at 11:37 AM