I woke up refreshed at 7am.  I would have like to taken another shower (showering at night is not my favorite), but you’ve gotta dance with the girl that brung ya.  I figured it didn’t matter much.  This part of the country has been in a drought, and the dust in the air is so thick that after a few hours in the car, it won’t matter when I showered.  This turned out to be true, by the way. 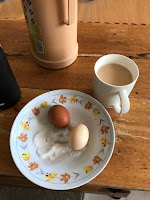 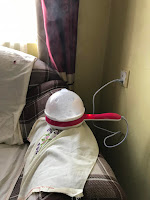 I packed everything and let my electronics charge while I joined Isaac, Leah and the kids for breakfast.  I had my choice of eggs, so I went with a classic – hard boiled. Interestingly enough, Leah emerged with this small plug in unit that makes hard-boiled eggs.  I was thinking, why does she need a machine to make hard boiled eggs.  Truth-be-told, I only chose them because I thought they were already made.  Anyway, here’s a picture of the contraption, and the answer to my question was, water conservation.  She boiled these 2 eggs using a shot glass full of water.  That’s it!  Makes perfect sense.
We sat and chatted while watching the news that then poorly segued into a Church service at the Technical University in Mombasa.  When the conversation ended, we loaded up Isaac’s Land Cruiser and we were off.  As can be expected, we had a minor scheduling change.  We would got to Isaac’s brother Anthony’s (pronounced ahn-toe-nee) home to say, “Jambo,” then Isaac would leave me with Antoni while he got his Land Cruiser fixed – there was a crack in the exhause that needed to be welded.  After that, we would head over to Veronica’s (Isaac’s brother Andrew’s wife) for lunch before picking up the headmistress at Sarena Girls Secondary School and heading to the school.  It’s located on Masai Mara right behind the Rescue Center. 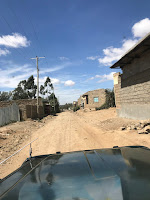 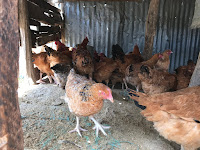 We went back inside and joined her husband, Antoni and Caleb. Soon thereafter, Andrew and Veronica’s children arrived from church.  Two daughters with a grandson in tow.  He was probably 1 or 2 years old, and was fascinated with my hair.  He sat behind me on a couch (pronounced “coach”) staring at it.  He was not so enamored with my face.  Despite my smile, he was not sure what he was looking at, and this time, he was the one voicing his displeasure.  It started as just a furrowed brow that was a constant as he mother fed him small spoonfulls of what looked like applesauce.  He never took his eyes off me.  At this point, everyone was laughing at his expression, and his voicebox kicked-in. So did the “fight or flight” response. He chose the latter and moved into his mother’s arms.  The laughter continued.
Isaac finally arrived and took the seat across from me. He ate quickly although he didn’t have to.  When he arrived, Andrew borrowed his car to run an errand.  He stood up and said, “I wheel be bahk in five…” He stopped himself. “Feefteen minutes,” smiling as he said it.  “We ah on Kenyan time.”  Isaac looked at me laughing and said, “Bangle,” referring to his earlier comment about watches and Kenyans.  Antoni got the joke.  Isaac ate quickly as he talked about the repair process.  He was getting nervous about the time because he started pacing, periodically walking outside to see if he could see Andrew approaching. Eventually he did.  It was close to 2:30 by now.  We had lost an hour.  Hakuna matata.
We eventually said our goodbye’s as we walked outside toward the vehicle.  I handed Veronica the bag of items supplied by Andrea, Karen and the fidget spinners donated by our friends (Jim, Adelle and Carson).  I showed her the spinner before getting into the car.  She liked them very much and commented that the children at school will like them, too.  They all stood and waved as we departed.
We drove back into the center of Narok to pick up Madam Tiampati, the headmistress of the girls secondary school we’ve been talking about helping.  Siana Girls Secondary is located behind the Rescue Center.  I’ll get more into that later.
We found her standing by the main road so the pick up went smoothly. The ride to the school did, too. Conversation was difficult, however, because with the windows rolled down, it was impossible to hear anything. The sun was blazing through windshield. 45 minutes into the 2 hour drive, Isaac said, “Ah-dam, I theenk you ah becomeeng Kenyan.  The sun ees not bahning you-ah skeen.”  He might not have noticed me constantly moving my arms and hands periodically trying to find shade inside the car.  Despite the twist and turns we made, the sun stayed directly in front of the car.  Now I know how Icarus felt.
The road went from paved and smooth to neither.  Although they’ve been working on the Mara Road for years, they may be finished within one more.  The unpaved section is teeth jarring and not for the feint of heart. 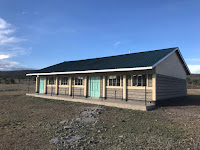 We finally arrived at the school at about 4:30.  I surveyed the area as we went inside Madame’s office. We sat down, signed the guest book and began talking about the school’s needs.  They were more critical (and severe) than I had thought.  There aren’t many schools on the mara. Literally.  I think this is the only high school.  The boys don’t even haveone. There are 4 classrooms that the government built.  There is a library (that contains madame’s office), and then there’s a kitchen that was built by the camp that Isaac works for – Entumoto. The school is three years young, which means that next year will be their first year with a high school senior class.  They don’t have room.  Not by a long-shot, although they will make due with what they have.  That is the rub.  Parents bring their daughters here for a high school education, but see that the space is tight and often decide to send them 2 hours away to Narok, but more likely, take them out of school completely.  Help is greatly needed here. 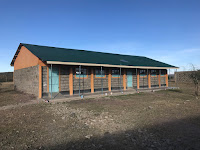 The discussion was interrupted by a phone call from Andrea. I apologized before answering the phone, but she knows I’m busy and usually waits for me to call later in the evening.  “Is everything okay?”  It was, she had just left church and Fr. George was asking about me.  She facetimed me and we were all able to say “Jambo!”  It was a nice break from the weight of the conversation, and even nicer to get a glimpse of home. 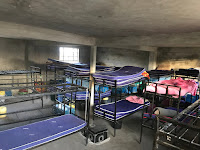 When we hung up, we decided to tour the grounds in more detail.  My steps were much lighter after hanging up with Andrea.  The classrooms were very well kept and looked younger than three years.  There are currently 86 girls boarding here… there are 60 applicants in the entering freshman class.  Yikes.  The dormitory was not cramped by any means, but the addition of any portion of that 60 will change the room dramatically.  Bunks were still only double stacked.  That was good.  Triple bunking is terrible, but it happens. 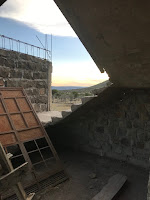 There was another large building that looked like it was on the fence – not sure if it was falling down or still under construction.  It turned out to be neither.  The CDF (county development fund) gave them money to build the structure, but upon inspection, found the construction to be poor.  It didn’t help that the school wasn’t given enough money to complete the building.  I inquired about repair/reconstruction, but we can’t do that. It’s too bad.  Due to the soil content, the most expensive part of construction is the foundation, and this one was good.  The stairs leading to the imaginary second floor were an indication of the concerns.  She asked me if I wanted to go upstairs.  There’s no chance those steps would support my weight. 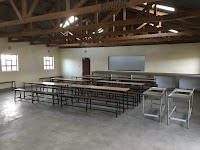 We next went to the kitchen.  It was the Taj Mahal.  Even Madame said so.  “Thees is the nicest fah-cee-lee-tee on the compound.”  She was right.  It needed some finish work… ceiling, plumbing fixtures, and some mounting of hardware, but it was really nice.  As we walked out, and started to close out the conversation talking about “next steps,” Madame asked if we would like to take tea.  It looks like we’ll be staying a bit longer.  We went to her living quarters and took a seat as she warmed mile for what turned out to be hot chocolate.  She brought out bananas and muffins, too.  Before we finished we were joined by the chairman of the school committee. He greeted us and talked about how grateful the community was for our visit and consideration.  They are eager to support us in any way possible.  The education of their daughters is very important to them.  That is something we support whole-heartedly. 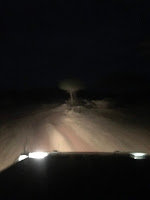 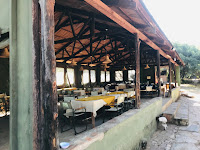 By the time we exited, the sun was almost gone.  It was long gone by the time we made it to my next bed.  This time, it was at Mara Springs.  According to Isaac this is a much more humble camp. In addition to the rooms they had, they also offered tents if you wanted to camp on the ground yourself - great for anyone in the scouting program.  I was never a scout. 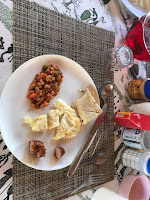 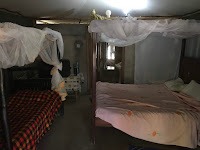 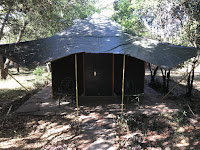 It was 9:00, and we were both very tired.  We ate dinner quickly.  The modest accommodations that I have not yet seen were preceded by a modest meal.  It was perfect.  It was ready when we arrive, it was hot, and it tasted good.  Tomato soup (green tomatoes), vegetables and maize-meat.  I had never had maize meat, but it was the equivalent of ground beef with onions and peppers.   When finished, we walked to the room and got acquainted with my new surroundings.  Two beds, a couple small tables, a shower and a toilet…  Goodnight!  I got ready for the tomorrow morning and started blogging after calling Andrea and Karen to say goodnight.  They always make me smile, and that gave me enough energy to write a little longer, although I faded quickly.  It’s now 7:20am on Monday, and I’m finishing yesterday’s blog.  I’ll add some pictures and hop in the shower.  I can now tell that the rooms are closer together.  I can hear people clearing their throats and coughing.  It’s mixed with the sounds of crickets and birds.  I’m trying to concentrate on the latter.  We have a long day ahead of us, so it’s time to get started.  I’ll see you all soon.

Posted by Adam Jablonski at 9:22 AM