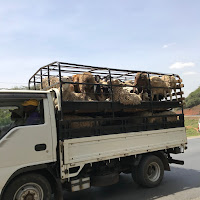 Wow, 8 o’clock came very quickly.  We were staying at the Royale Hotel in Karen.  It’s nice and very consistent spot for us.  It’s about 20 minutes outside of city of Nairobi, and anything outside the city is okay in my book.  We met downstairs for breakfast.  The girls and I got there first followed by Onesmus, then Isaac, then Sergio.  The breakfast area was outside underneath a large canopy, similar to one used for a graduation party.  The food was set up buffet style: fresh mango juice, coffee, tea, hard boiled eggs, bread, liver, potatoes… yes, I said, “liver.”  Omelets were made to order, too.  We laughed about the previous day as we ate.  It was lively conversation despite the fatigue that most of us were still fighting.  We checked out of the hotel and began the 2 hour journey to Narok.  When I say 2, I meant 3.  First, though, we stopped at a local mall to grab some supplies.  Basically, that meant water.

This was a route that we were familiar with, so we waited with excitement to see the expressions on Sam and Sergio’s faces.  As we drove through the Rift Valley, we stopped at a photo stop.  It’s just off the road between a couple of well-placed curio shops.  It gives you an expansive view of the valley below.  The girls clowned around as they took pictures and after a quick walk through shops we were back on the road again.  Our first stop after that was at the smallest church in Kenya.  It, too, was along the side of the road.  Built by Italian POWs during WWII, it was the smallest Catholic church we had ever seen.  Despite driving by it many times, this was the first time we got out to get a closer look.  It was indeed small, and very intimate.  An unusual place for a church, but at the same time, it wasn’t.  Again, more pictures and stories, then back into the van.  It wasn’t long before eyes got wide.  We came upon a large group of baboons that were crossing back and forth cross the road.  Sergio and Sam were absolutely elated!  Andrea looked at me thinking the same thing that Karen articulate. “If they’re this excited over these baboons, you’re going to love Masai Mara!”  True dat.
We finally were away from all the inclines and traveld along a relatively flat paved road as we passed by small towns and roadside vegetable stands with people selling their fruits.  I moved from the front seat to the seat in the second row.  My water bottle was sitting next to the seat in front of me, and when I picked it up to get a drink, the outside was incredibly hot.  I thought nothing of it.  Had I thought about it though, I would have remembered that the driver and front seat passenger are sitting on top of the engine.  Currently, a very, very hot engine.  Twenty minutes later, we were pulled over to let the van cool down.  Everyone got out and Isaac and Onesmus tilted back the front passenger seat to expose the engine.  As we exited, you could see the neon green radiator fluid pooling underneath the van.  All part of the adventure. 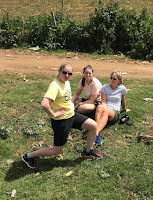 A young man in coveralls ran up to the vehicle.  It may sound nutty, but if you’re wearing coveralls in this country, there’s an excellent chance that you’re a mechanic.  He was, although I would have questioned his credentials.  The first thing he did was hold up the hose that had come loose, which meant the fluid that ws running underneath the car was now spraying the dashboard.  Brilliant.  Next, to relieve the pressure built up in the radioator, he popped off the cap with a rag… more fluid and steam spraying everywhere.  At this point we found a spot on the grass to sit down.  Sergio was talkative along the way, marveling at the similarities of the landscape with his childhood home in Columbia, he took the opportunity to close his eyes in a “bed” of grass. 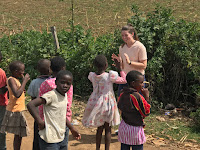 A toddler walked out from behind a small shop and stared at us curiously.  It made perfect sense for the biggest, scariest stranger to approach first.  Thinking back, probably not the brightest move.  I spoke some Kiswahili before he ran back to the shop in terror.  Then, the smarter one took over.  Andrea stood and approached some young boys and struck up a conversation.  The previously terrified 3 year old returned in the arms of his mother and, once again, began talking to Andrea.  Knock off a foot and a half and throw in some freckles and you’re much less threatening.  More soon joined us, but they were trying to sell us roasted corn – a common snack.  They remove the husk and cook it over a small barbecue.  I don’t believe they have corn for consumption and feed corn.  I think it’s all just feed corn.  Karen and Sam were playing with the  Sam was playing patticake with a young girl ( don’t think they call it “patticake” anymore, but I’m old and don’t know what else to call it) while Karen was clowning around with a group of elementary age kids.  This kid wanted to sell me an ear of corn for 100ksh (Kenyan shillings).  When a Kenyan sees a white guy, the immediate thought is “profit.”  Normally,

these cost no more than 30 shillings.  I teased him about the ear he was trying to sell me for 100, told him should be 30, then take off another 15 for missing kernals.  He and his friends laughed with me as we haggled.  I looked over to see that previously scared 3 year old in Andrea’s arms.  Beauty and the Beast flashed in my head… guess which one I was.  Still, it made me smile…  she always does.
younger kids as I haggled with the teenage corn salesman.
I bought the corn, and yes, I paid him the 30ksh.  As a point of reference, $1 is 100ksh, so 30ksh is 30¢.  Soon after I handed over the coins, we were back in the van and on our way.  Another 30 minutes and we arrived at our next destination – Park Villa Hotel.
Dabash came out to greet me right away.  He is something of a manager here and has always been very kind and helpful.  Isaac met with him earlier and everything was prepared for us.  He handed us our keys and we went right upstairs to our rooms.  For the moment, we were all on the same floor.  Andrea and I were in the same room I’ve been staying in for years.  Sergio was down3 doors down and the girls were at the opposite end.  It didn’t last long, though, because their faucet handles were broken so they were moved upstairs directly above Andrea and I.  No worries.  Hakuna matata.  We unpacked and got a little rest before Isaac returned to bring us to his home for dinner.
Leah was waiting there with food already prepared.  I’ve never understood why, but food prep in this country tends to take close to 2 hours.  It’s insane.  Isaac knows that we’re not interested in eating dinner at 9pm (despite our meal at midnight the night before), so he’s great about making sure things are ready for us.  Leah is a wonderful cook, so we’re excited about this meal - goat stew with potatoes and spinach.  The stew had carrots, peas, lentils, onions, and green peppers.  It was fabulous, and everyone ate their fill.  Isaac refuses to take any money from us for his services, so the last time we were here we bought him a fridge.  Today, we were the benefactors – cold beer and Cokes.  Again, fabulous.  We joked and told stories as we ate.  Their children Caleb and Tatiana were smiling and laughing with us.  Especially around children, Karen brings out smiles in everyone.  We gave them their gifts and continued to joke and laugh.  I’ll have you know that Bop-It is now in Kenya.  If you haven’t played it before, we highly recommend it.  It was a blast watching them play.  We thanked them for the delicious meal and headed out into the darkness.  You can’t stand outside at night without looking up at the stars.  The lack of ambient light made the stars jump out at you.  The constellations that are only visible in the periphery of you eye back home are as bright as Orion’s Belt here in Kenya.  You can’t see your hand in front of your face, but you could spend hours counting the stars.

A short 15 minute car ride later and we were back in bed.  It was an early night – close to 10pm when we got back, so this should mean everyone will get a good night sleep.  Lala salama.

Posted by Adam Jablonski at 9:21 PM