We got a lot of rain last night.  The farms and water tanks needed it badly.  When I came out for breakfast everything smelled fresh and the red dusty earth had turned to a dark brown soil.  The difference was remarkable and it will make traveling that much more pleasurable. 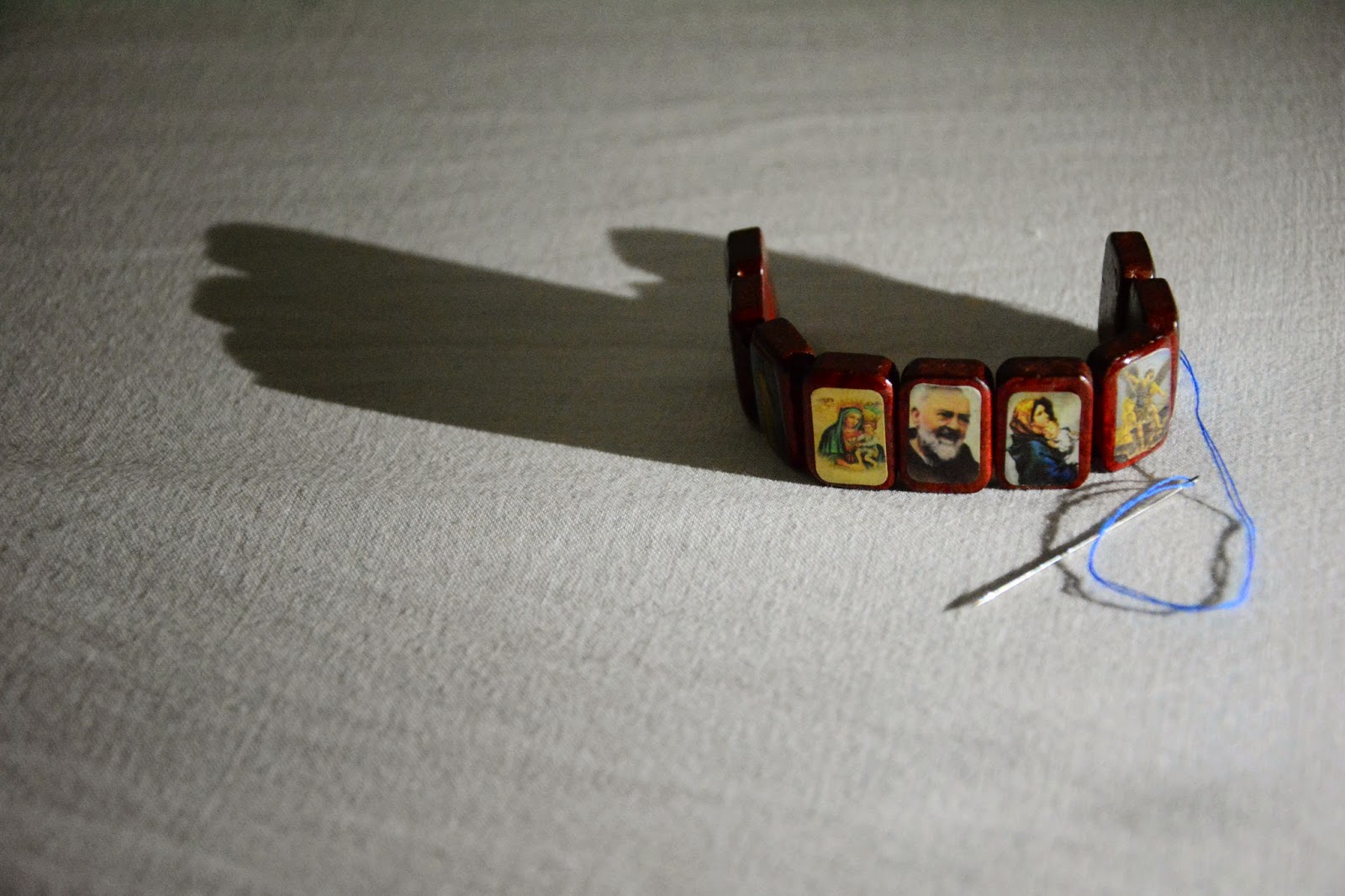 So, as promised,  last night I found a needle and thread and connected the broken pieces of the St. Padre Pio bracelet together.  I had to use my iPhone for light because the bulb above my bed provided a hazy glow that enabled me to navigate my room but certainly not enough for me to read or sew!  It took me 15 minutes to position it so it would provide the most light while not falling down.  It was still sitting there when I went to take a picture of it to show Andrea.  It came out pretty well but I need some ideas on what to do next because it's really not a bracelet just yet.  After two snaps off the shutter I stood up and said, "Holy cow," (that's not really what I said, but I'm trying to keep this "G" rated)  although nobody was there to hear it.  The light from the iPhone cast a shadow that looked exactly like hands joined in prayer.  I stood there in awe looking at it.  I love the little signs that the Lord shows me as affirmation that we're doing okay.  Andrea commented last night about how marvelous it that we are different people from different cultures in different parts of the world, but we can all be brought together through faith.  How right she is.  Five hours later He would give me another reminder.


I woke up at a little after 4am; happy that I'd gotten 5 hours of sleep.  I called Andrea, Katie, Kevin and Karen (although I wasn't able to speak with Katie) over the next hour and a half.  I finished the calls and realized that I needed to turn on the heater for a hot shower.  Yesterday I apparently didn't leave it on long enough before turning on the water = cold shower.  It didn't kill me, but I wanted to get it right today.  After 30 minutes I stepped in.  No way!  Not possible!  I know I left the heater on long enough?  Want went wrong?  I got very frustrated and immediately began to think about changing rooms AGAIN and returning to my leaky sink.  Better that than cold showers every morning.  The frustration got even worse as the water flowed down from my head.  There's not a lot of pressure, so it's not like the ice bucket challenge... it's more like the ice bucket dribble.  It's torture. Truly.  I finished up and dried off sputtering to myself the entire time.
Because the sink is just outside the shower I would usually take the wand that is attached to the shower head and drape it into the sink so that I could shave with hot water.  "Not today," I thought to myself.  I finished getting dressed and the hair on my neck was especially itchy as if to say; it may as well have been giving me a raspberry (anyone under 40, please ask your elders what a "raspberry" is).  Now that I was fully dressed I realized that I left the heater on so I went over to shut it off.  The wand was hanging precariously from a pole extending from the wall.  I though let's give it one more try.
When the heater is operating properly it let's you know by making a sound that sounds like a scrubbing brush on wet cement.  It's a wonderful sounds that can sometimes even be angelic after days of cold/no water and lots of dirt.  Well, as I turned the rusty handle I heard the angels.  Although they were singing loudly, I heard a voice in the background.  "You are not the one in the driver's seat," and there was hint of laughter and a gentle smile in the tone.
When I first began making this trek, I was lucky to have water and electricity.  Things have improved dramatically over the years and I've gotten a little spoiled.  Jim used to refer to it as "getting fat and lazy."  I was reminded that I'm not here for the hot showers. After proclaiming all day yesterday that He was the reason I'm here, I shouldn't have had to be reminded.  But that faint laughter and gentle smile let me know that He understood.  So do I, and thank you for the reminders.
We're leaving for a meeting with the Clinic Committee before heading to Esivalu Primary School.  I'll fill you in on those exploits later.

Posted by Adam Jablonski at 7:38 AM